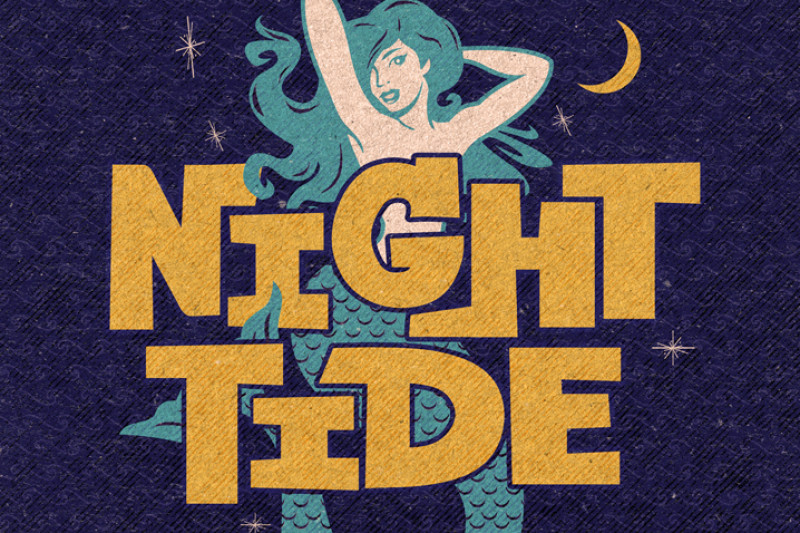 NYMF: Night Tide Brings Us Back To The Beach With a Send Up To B Movies

NYMF: Night Tide Brings Us Back To The Beach With a Send Up To B Movies 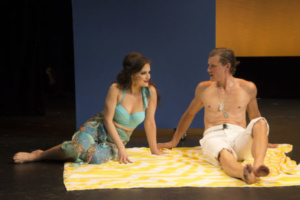 The new musical Night Tide at NYMF is like being dropped into one of those “Beach Movies” with Annette Funicello and Frankie Avalon, which later turns into a female version of Bat Boy. Based on the 1961 B-movie thriller by Curtis Harrington, Night Tide stared a young Dennis Hopper, but in this version it is Tara Martinez who will steal the show.

Luis Villabon directs and choreographs this like a tongue and check send off to those bad acting, quirky characters and head turning obvious moments. Taylor Tash has kept the book and the lyrics satirical, with the dialogue poking fun at itself. Nathania Wibowo’s score is infectious.

Johnny (Patrick Dunn) is on leave from the US Navy when he spies the mysterious Mora (Tara Martinez). Haunted and with an obsession to the water, Johnny instantly wants to be the “Save the Girl.” Turns out Mora is the local boardwalk attraction, whose past two boyfriends have died. He is warned to stay away from her by the girl who crushes on him (Charly Dannis). Johnny is told Mora is a real mermaid by the man who rescued her as a child (Rick Roemer), but could he have an ulterior motive? But Johnny’s devotion knows no bounds.

Through out the story the terrific Josh Sassanella and his sidekicks Kissy Simmons and Ya Han Chang act as a 60’s throwback Greek chorus, in perfect harmony.

Martinez steals the show with her powerhouse vocals, getting a standing ovation with the title song “Night Tide.” She is like a young Linda Eder. Her deadpan approach is perfectly timed and she dances like a dream. My guess is Ms. Martinez will be discovered from this festival performance and no “we will not find this strange.”

Patrick Dunn is her perfect match all doe eyed and innocent with vocals that cut through the mystery.

Charly Dannis as the girl “Crushed,” Rebecca Hoodwin as the fortune-teller with nothing good to say and Rick Roemer as Mora’s creepy savior all have moments to show us just how talented this cast really is.

Andy Peterson music direction and six-piece band with David Salter on guitar, Billy Smollen on bass, Derek Swink on drums, Luke Meyer on woodwinds and E. Zoe Hassman on cello, keep us in the mood.

David Starr’s set of movable panels and fabric make us feel as if we hit Coney Island in it’s heyday. Jessa-Raye Court’s costumes are a lot of fun and Chris Steckel lighting kept us on the edge of our seats.

Night Tide is retro show that could build a downtown cult following and run for years.