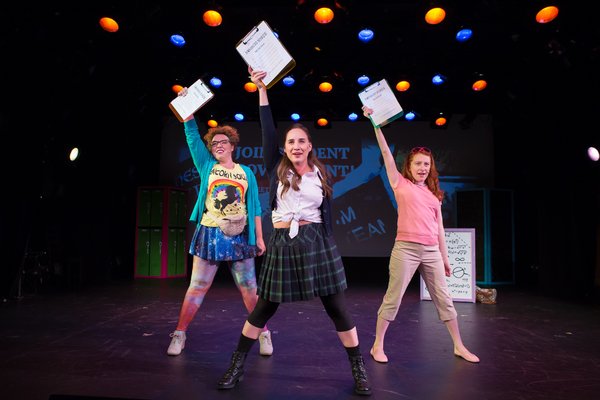 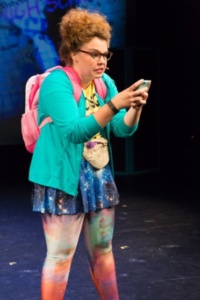 Get ready Disney because Numbers Nerds is likely to be your next hit. Created in response to the call for more female roles available in the school and community theater circuit, this show succeeds in every way. 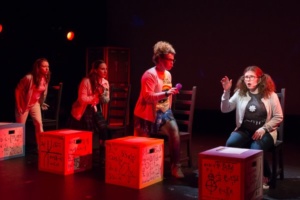 Numbers Nerds is the story of an all-girl, high school math team from Our Lady of Perpetual Chastity in Waukesha, Wisconsin. The team has won the Regional Math Competition and is chosen to compete in the National Math SUM-IT. When their team leader Melissa (Maisie Rose) gets stage fright and misses a question in competition, she is shut out. The team replaces her with a male student (Jake Morrissy) who is new to the school since this all-girl, Catholic high school has recently gone co-ed. Mary Kate gets coached by the Drama Teacher (Sharon Sachs) who’s turned janitor thanks to budget cuts and returns to the fold. 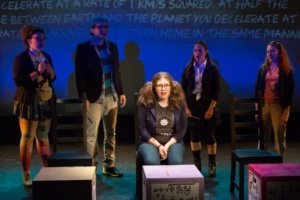 The cast, mostly non-union, is so talented with voices that are on par with any Broadway show. As the lead, Maisie Rose makes her character Melissa every girl who has had hang-ups that think they will ruin their lives forever. We root for her, and when she wins, we feel her accomplishment. She also has killer vocals. Madison Kauffman is a delight as Barbie the unicorn loving teen, who lives in her own world concealing her loneliness and abandonment issues. As the popular girl Amber, Tiffany Tatreau is every girl who weighs the cost of popularity with being who she really is. Her adolescent viciousness hides her underlying insecurity. Danielle Davila is Mary-Kate, a girl who needs the scholarship because she will never go to college with so many brothers and sisters. She also has a thing for the new boy, but she doesn’t want that to get in her way. Ms. McGery is every Godmother who saves the day and with Sharon Sachs in the role hilarity ensues. Jake Morrissy shines as the geeky home-schooled Leroy, who hasn’t got a clue how to act socially. He is heartbreaking with his awkward behavior and movements, but his comic timing is impeccable. 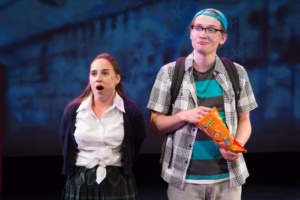 Director and choreographer Amber Mak creates an energetic delightful romp, where kids, as well as parents, will be entertained.

The book by Laura Stratford is heartwarming and funny. David Kornfeld’s music is upbeat and makes the grade. Alex Higgin-Houser’s lyrics are clever. I especially loved the songs “I Look Like an Engineer” and Melissa’s songs (there is a series of them) about math geniuses and what would they do. 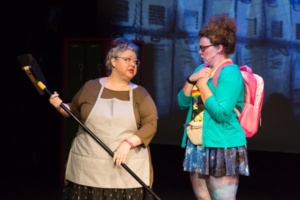 Girls need good role models, and this show manages to encompass all the problems of teens – minus the sex and drug issues – and does it in a way that everyone can relate to. We should all be able to learn this way.