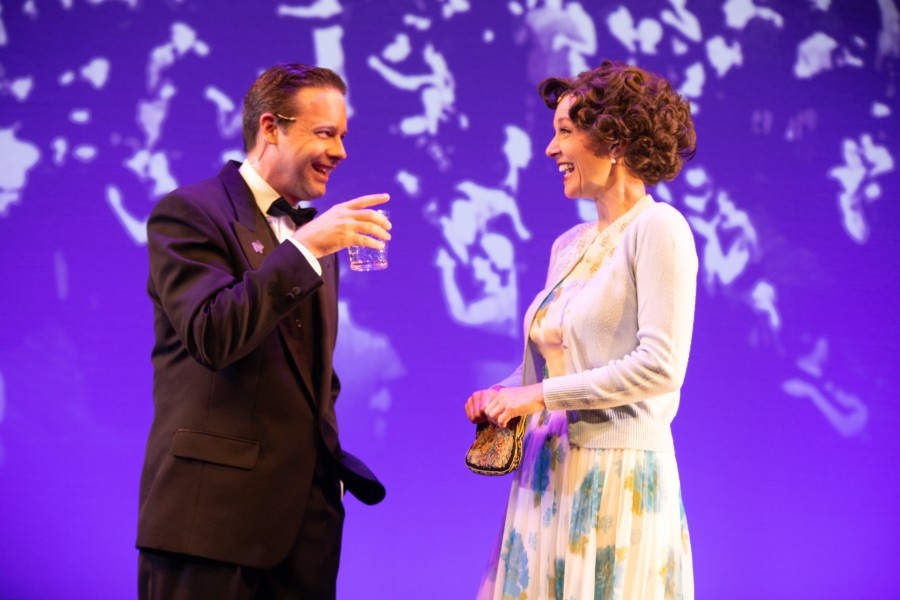 “Overture is a story about saving something beautiful. Overture celebrates the extraordinary grass-roots effort to help the Kansas City Philharmonic survive during its 1953-1954 season. In 1953, the Kansas City Philharmonic debuted its first opera festival and was striving to become a world-renowned orchestra. At the same time, it was fighting for financial survival. Against this backdrop, we also discover two fictional characters, Lily (Krista Eyler) and Christopher (a wonderful Joel Morrison), who share the same passion for music and are fighting for survival in ways of their own.”

This was what the book writers Krista Eyler and Barbara Nichols stated the show Overture, now at NYMF was about. Instead it was a love story, that was so fantastical, the show made little to no sense, when the premise and idea held such promise.

Overture begins with an orchestra-tuning up, “Favorite Sounds in The World,” sung by Lily (performed by Eyler, who also wrote the book, music and lyrics), who works in the Philharmonic’s office. Lily is losing her hearing and is in love with music. Christopher (Morrison), the Philharmonic’s assistant conductor, has become disenchanted. After one minute of conflict, these two fall in love almost instantaneously for each other. Within one week Christopher is offered a job in another city and asks Lily to move with him. By the end when Christopher is finally given the chance to conduct the Orchestra, he gives it to Lily with no rehearsal, let alone forgetting that Lily could have an attack of not hearing.

Lily and Christopher are the musical’s only fictional characters. Everyone else is based on a real person involved with the orchestra. German-born Hans Schwieger (Mark Murphy), was the orchestra’s conductor from 1948-1971. Office staff member Inda Beasley (well played by Kay Noonan); and Richard Wangerin (Kipp Simmons), the orchestra manager are also in the story.

We also meet Marie McCune (Erica Baruth) and Clara Hockaday (Stasha Case) who founded the Jewel Ball Members of the Philharmonic’s Women’s Committee and were instrumental in keeping the organization alive.

Overture features 17 songs that Eyler also wrote and they are all unforgettable. The show is directed by Ms. Nicholas. Sadly, this just seems to be a project for Ms. Eyler and Ms. Nichols to show to New York their talents. How it comes off is like community theatre.