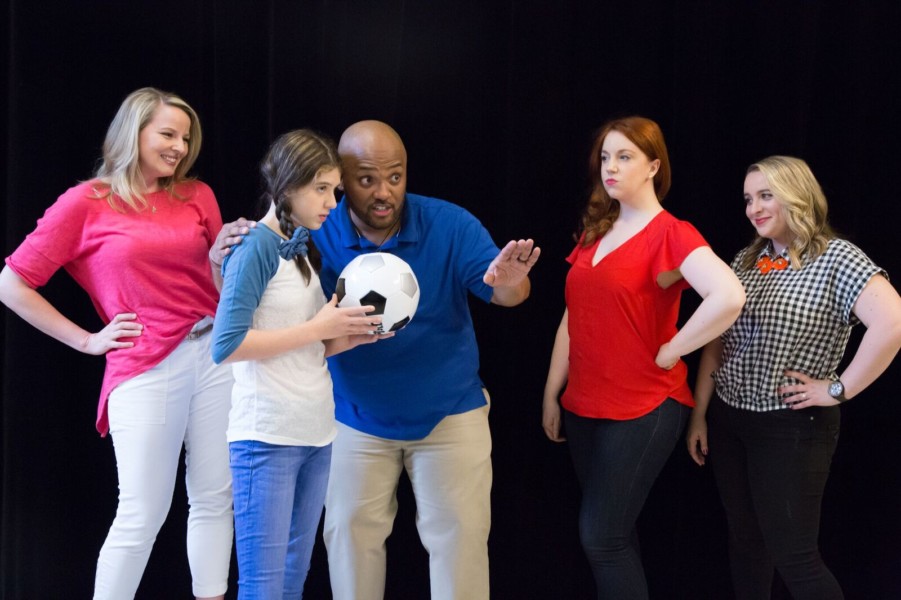 Soccer moms gone bad has been a popular subject in shows for a while now. The latest is Play Like a Winner, based on Caytha Jentis’s play, It’s All About the Kids.

From the moment the show starts with a dead soccer coach who has been impaled with a flag, you expect a wickedly fun time.

We flashback to Kathy (Jessica Tyler Wright) explaining how it all began, as she and her daughter, Jenna (Zoe Wilson), have just moved to the neighborhood. Jenna is not cool enough to be popular and a worried Kathy encourages her to try out for the soccer team. Jenna is none too keen, as the star player happens to be the girl who torments her at school. Kathy wins in getting Jenna to play as we meet the “Stepford” inhabitants. Melissa (Casey Erin Clark) is the team’s head mom with an agenda and the mother of all of Jenna’s woes. Nick (Nicolas Dromard), is the utterly ruthless soccer coach everyone wants to be with, including Gary (Frank Viveros), Kathy’s best friend, Tracy’s, (Megan Kane) husband. Though a soccer mom, Tracy feels she is losing her husband, who has a serious “bromance” with Coach Nick.

The cast is blessed with powerful voices and sound terrific on David Wolfson score. They also managed to create moments of hilarity from the script and lyrics by Erik Johnke.

Like Bat Boy, Heathers, Toxic Avenger, Urinetown and other satirical musicals of this type, what’s lacking is strong comedic choices and a devilish sense of humor. The show needs to blindside you with a unique twist. Right now, it’s a little crude and not that amusing. The songs, though tuneful, don’t stand out. In the end, the game has been played, but it’s more like a tied score.