NYMF: Real Men, A Musical For Guys, And The Women Who Put Up With Them A Commercial Success Waiting to Happen

NYMF: Real Men, A Musical For Guys, And The Women Who Put Up With Them A Commercial Success Waiting to Happen 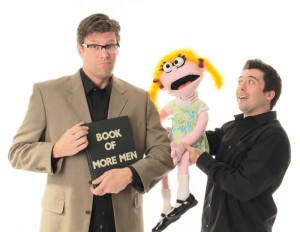 In judging musicals at NYMF they fall into categories, those you love emotionally and those that are commercial. Real Men is just that, a producers dream, a show that will appeal to all kinds of audiences. A cross between Ave Q and Menopause the Musical only based on Real Men…. straight men. This is a musical even the husbands will want to see. In the audience I show this show with, old and young men and women, even the gay men were laughing up a storm. The show is silly, crass at times but ridiculously it gets under your skin. When I was on-line for the next show, this was the show the lines were talking about.

Stephen G. Anthony join the duo to make a trio and all are competent vocalists and comedians. Anthony, has great dead pan expressions and is reminiscent of George Lopez. Mr. Louis is fabulous at being goofy and reminds me of my friend Jay Rogers. Mr. Maria plays the “straight man,” but also bursts out of the mold.

The music is catchy and fun with some touching ballads, the sketch’s amusing. David Arisco keeps this show at a clip and knows how to make a gag go over. When the giant phallus makes it’s appearance in full glory, it is then whacked to a shrunken version of its former self. Congratulations to Paul Louis and Ellis Tillman fro puppet design and construction and musical director Manny Schvartzman for making this sound wonderful.

For those who laugh at me for saying this is a cha-ching at the box office just remember, Menopause the Musical has had over 11 million people who have seen the show.