NYMF: Temple of the Souls – Where Star-Crossed Lovers Collide

NYMF: Temple of the Souls – Where Star-Crossed Lovers Collide 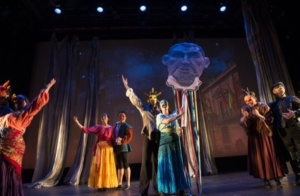 Temple of the Souls attempts to bring the history of the Taínos to the forefront while using star-crossed lovers to entice. The current effect is a not so engaging musical, though it has potential.

For those who do not know the history of the Taínos of Puerto Rico, in the 1500’s the Spanish not only raped the women of the Taínos tribes but also slaughtered the men and took what they wanted.

Temple of the Souls begins as masked bodies writhe in motion and sing until a group of tourists enters, and just as suddenly, we are plunged into the 16th century. Here we meet 16-year-old Amada (Noellia Hernandez) who dreams of love. Her Nana (Lorraine Velez) tells her about the Taínos, who her father, Don Severo (Danny Bolero), has massacred. It turns out her Nana is actually her mother and a Taínos, but if this secret got out it would have consequences. Amada has no clue. 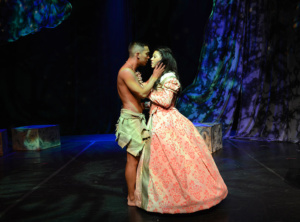 In the meantime, a Taíno youth, Gaurio (Andres Quintero), has come looking for love, despite the fact he has walked into enemy territory. Amada and Guario fall in love the moment they see each other and of course, are forbidden to be together. Don Severo wants Amada to marry his nephew, Nemesio (Jacob Gutierrez), but Amada defies logic and runs to meet Gaurio at the Temple of the Souls, where the two make love.

Instantaneously Amada is pregnant. When her father comes to fetch her, he accidentally kills Nana, and this is when Amada finds out she was her mother. Don Severo then kills himself in remorse. Amada begs Nemesio to spare Guario, but Nemesio kills him anyway. Amada decides to raise their child, the last of the Tainos, and write a history of their people. Suddenly, we are back with the tourists and a reincarnated Amada and Gaurio embrace. 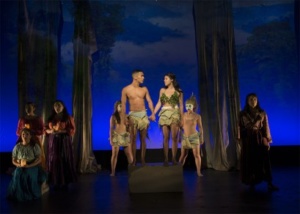 Lorraine Velez has a sensuality to her and she lures you to watch her. Noellia Hernandez and Andres Quintero are perfectly Disney-esq. Jacob Gutierrez steals the show every time he is allowed, much like Gaston in Beauty and the Beast.

As a director, Lorca Peress has a way with the star-crossed lovers, especially in the scene where they make love. But the book is so muddled that it is hard to keep our attention. Milteri Tucker’s choreography is all over the place and needs some honing.

What is interesting about this piece is it was developed by Anita Velez-Mitchell, who died at the age of 99, and her two granddaughters, Lorca Peress and Anika Paris, a noted composer with many Hollywood credits.

One standout from the show is the song “I’m Not Dreaming”, a tender duet that shows the possibilities this show does have.

Temple of the Souls: NYMF at the Acorn Theatre, 10 West 42nd St. Closed.