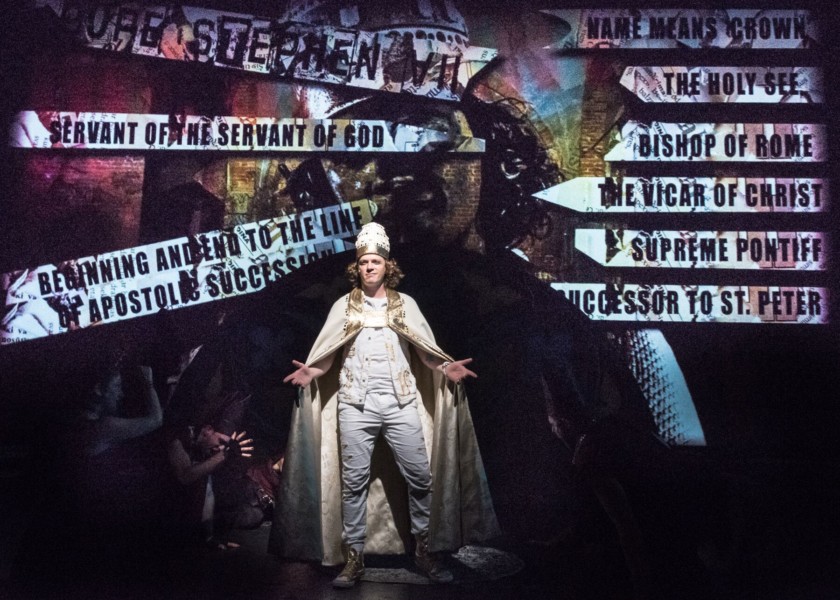 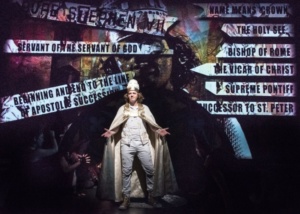 Robbie Florian’s The Cadaver Synod: A Pope Musical, is like the gay Bloody Bloody Andrew Jackson of the Pope World, minus a strong book or score. What has merit is the production quality of Kevan Loney’s scenic projections and Daryl A. Stone’s costumes that make this show visually appealing, but the book is confusing, music loud and unpleasant. The lyrics are for the most part unrecognizable and when you can understand them trite. 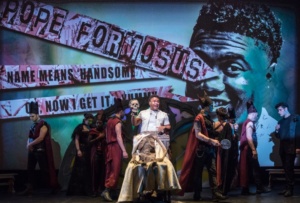 Part of the problem with this show is that it doesn’t know what it wants to be. In Act 1: We learn about an actual event called the Cadaver Synod, where Pope Stephen VII (Evan Maltby) has exhumed the corpse of Pope Formosus (Forest VanDyke) and put it on trial. A young deacon (Ethan Gabriel Riordan) has been chosen to defend the cadaver, but is not truly allowed to do so. The kangaroo papacy rules that the corpse is guilty and strips the skeleton of his three fingers and all the blessings and rulings he had put into effect as Pope. 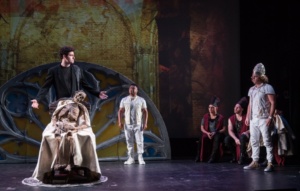 This story if fully fleshed out would have been interesting without the zealous choreography by Gina Duci, which made the cast look as if they were doing an extended version of Michael Jackson’s “Thriller. The music here is mostly electronica. The scene ends with Pope Stephen VII locked in an embrace with a live version of Pope Formosus. 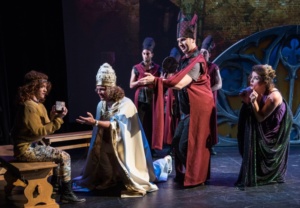 Staci Stout as Lambert with David Larsen as The Pope Photo by Russ Rowland.

Act 2 brings us to why Pope Stephen VII wanted Pope Formosus defrocked. It seems the two had a homosexual affair. Now a bishop Stephen feels wronged when Pope Formosus dismisses their love after having sex, claiming a Pope could never be gay so therefore Stephen must be a woman. Stephen seeing red wants revenge. In the end having Pope Formosus’s acts negated, Stephen has negated himself.

Suzanna BowlingSeptember 16, 2021
Read More
Scroll for more
Tap
Cats Meowed With a Spamilton Flare To Meet Waitress at 106.7 LITE FM’s Broadway in Bryant Park
NYMF: Night Tide Brings Us Back To The Beach With a Send Up To B Movies