NYMF: The Fourth Messenger A Spiritual Look At Our Strengths and Flaws

NYMF: The Fourth Messenger A Spiritual Look At Our Strengths and Flaws 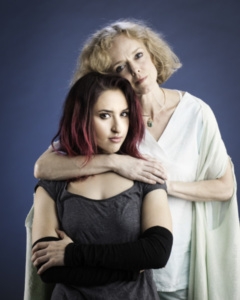 I absolutely loved The Fourth Messenger despite its flaws, which is that we know the ending from the very beginning. Raina’s (Samia Mounts) father has just died and she wants to do an expose on an acclaimed spiritual leader named Mama Sid (Nancy Anderson). Sid is thought to be a possible modern incarnation of the Buddha.

The opening number “Pebble in a Lake” defines the two at the place where they are now. “The Next Big Story has editor Sam (Alan Gillespie) needing a story to boost failing ratings as his lover and intern Raina returns from her father’s funeral. Raina proposes bringing down the media-darling Guru and Sam agrees. Raina goes to Mama Sid’s ashram to get the dirt on the spiritual leader and bring her down. As Raina arrives and starts to meditate the quiet gets to her, in the terrific “Monkey Mind” song about meditation distractions we see her struggle. Then Mama Sid enters as she counsels a woman with cancer, we see the spiritual side of Sid. Immediately there is a connection between Raina and Sid. As Sid’s hidden past is revealed, she receives some unexpected revelations of her own. Through it all we see an updated version of how Siddhartha became the Buddha and it is enlightening.

The Fourth Messenger is almost sung-through and the music of Vienna Teng’s Broadway, eclectic, jazz, folk-rock mantra-infused score is simplistic and driving all in the same breath. Tanya Shaffer’s rewriting of the Buddha story is inspired and accessible. Her lyrics speak to the mysteries of the heart. Jesse Lozano’s musical directed enhanced the whole sound.

Directed by Broadway’s Matt August, this show has a polished clean look that is well thought out. The choreography by Natalie Malotke was not over done and charming. Set and costume designer Caitlin Ward again kept it simple, but Sid’s outfit looked refreshing and comfortable.

This show like War Paint focuses on two stellar performances. At the helm is the golden voice of Nancy Anderson, who lets us know Sid’s pain and dislocation. Being a spiritual leader is never an easy path. Ms. Anderson’s vocals soar in cadence and enlightenment. Ms. Anderson also does a marvelous job at showing us a young Sid.

Samia Mounts makes us feel Raina’s loss, anger and confusion. Her big belt soars in heartbreak and she wins us over.

As someone who understands this pain and for a long time has tried to forgive and let go, this show helped heal a piece of me. I hope it finds producers and a home to show the power of our fragility and of our strengths. We need more shows like this to heal our world.

Suzanna BowlingJanuary 24, 2023
Read More
Scroll for more
Tap
NYMF: Night Tide Brings Us Back To The Beach With a Send Up To B Movies
Meet the Playwrights of Summerfest: Ryan Dancho Enters Therapy To Create Caught Dreaming