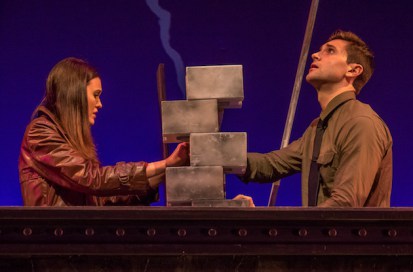 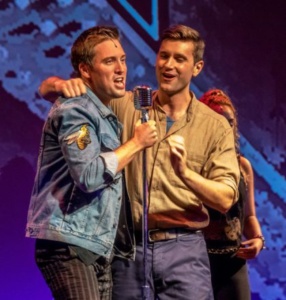 Not even Air Supply’s front man Graham Russell’s music and lyrics in A Wall Apart can help this show gain some depth.

A Wall Apart follows two brothers whose lives are torn apart by the Berlin Wall. Part one of the problem is there are three brothers and that is where the focus should have been. The third brother is almost non-existent. The youngest brother, Mickey (Josh Tolle), wants to be on the western side of Germany to pursue his music career and his soon to-be-wife, Suzanne (Emily Behnny). At their engagement party, Esther (Maddie Shea Baldwin), Suzanne’s best friend, meets Mickey’s brother, Kurt (Jordan Bondurant), and it is love at first sight. Their older brother, Hans (Darren Ritchie), is a member of the German border patrol and is on opposite political sides of his brothers.

As the Berlin Wall becomes erected and enforced all of their relationships become divided, and lovers are kept apart until the wall is torn down twenty-eight years later.

Due to the rangy score, the cast struggles for notes at one point or another. They also have a hard time creating fleshed out characters, as the book gives them very little to work with. Maddie Shea Baldwin, Emily Behnny and Josh Tolle manage to at least get a few moments of empathy.

Sam Goldstein’s and Craig Clyde’s book is trite and has no relevance in today’s climate. Most millennials haven’t a clue about this time in history.

Russell’s score seems out of date and not fresh or exciting. The songs just sound loud and all the same.

Keith Andrews’s direction and choreography don’t help either. The whole show seems as if it were created on speed. The movement is frenetic and awkward.

Maybe there is a show here, but it needs to be unearthed.

Genevieve Rafter KeddySeptember 12, 2021
Read More
Scroll for more
Tap
NYMF: Play Like a Winner Misses the Goal
NTLive’s Angels in America: (Still) A Gay Fantasia on National Themes Both Past and Present