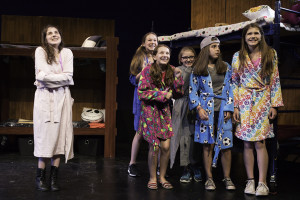 The girls of Camp Rolling Hills

Camp Rolling Hills is one of the smartest shows I know. This is a children’s musical that has spawned a successful book series by Stacy Davidowitz who also wrote the book and lyrics to this production, along with David Spiegel. The music and lyrics are by Adam Spiegel. Together with a talented cast of youngsters Camp Rolling Hills is perfect for community theatre, schools and the children’s theatre’s throughout the country. Unless your child is in the production, it really isn’t doesn’t have enough plot, or musicality to hold an adult’s attention. 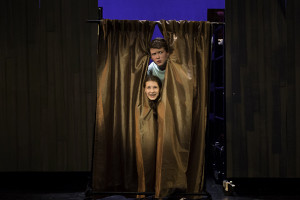 Set in a camp where the kids are a little on the misfit side these twelve 12-year old campers escape their everyday lives for eight weeks to meet up with friends who they have known throughout the years and feel at home with. These campers come back year after year to meet up, catch up and grow up. This year a new camper Robert Benjamin (James Ignacio) is sent away to Camp Rolling Hills by his newly-divorced parents, he resents being stuck in a strange place with a bunch of enthusiastic weirdos who’ve nicknamed him “Smelly.” As he learns to play guitar, finds first love with “Slimey” (Beatrice Tulchin), who he is instantly attracted to he starts to enjoy camp. Soon, the two are confiding things in each other they feel they can’t tell anyone else. After a misunderstanding at the camp dance, the boys’ cabin and the girls’ cabin trade pranks in an escalating war until Slimey and Smelly patch things up with the two groups. The campers of San Juan Hill (the boys) and Anita Hill Cabins( the girls), end up having the greatest summer their lives, breaking the rules, making lifelong friends, and learning important life lessons along the way. 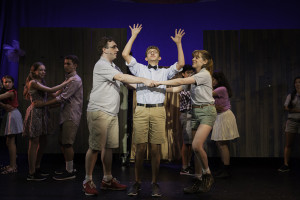 Both leads have terrific voices and natural acting abilities. They both have performed on Broadway as have “Play Dough” (Mitchell Sink) a camper who loves to eat and Jenny (Sophia Genus) who has a boyfriend who dumps her in a letter during camp. The cast is funny and endearing. The adults are basically there for continuity and seem written to bring to mind any staff of a camp complete with all the cliches.

The book is well written and has a natural selling point at the end of the show, since it already has a young adult following. The music is catchy, but too many of the songs have the underscoring of Newsies, especially the theme song “Rolling Hills.”

The direction by Jill Jayson keeps the show moving. The choreography by Theresa Burns is perfect for children of that age who are not really dancers.

Altogether this is the perfect show for a place who wants an intelligent children’s musical with a large cast.