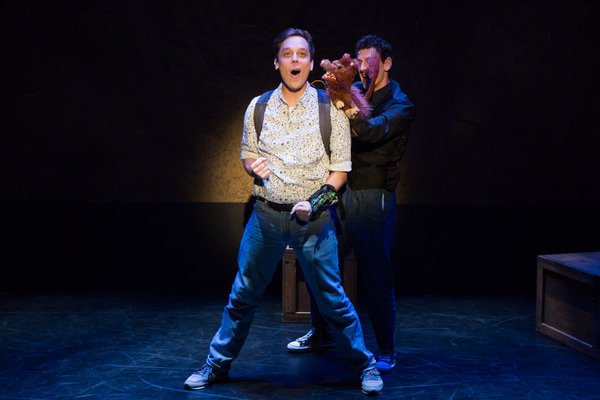 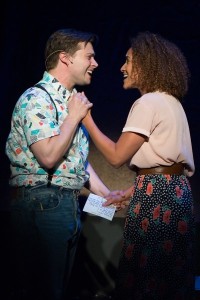 Before seeing  Ludo’s Broken Bride, I had never heard of the band Ludo or the 2005 concert album of the same name. After seeing this musical, I actually went and listened to this fantastical album. Where the show failed to grab me the album did. Part of the reason for this show and any rock show’s demise is the sound system. You mike sound differently for a rock show and somehow Broadway does not understand this concept. Emilo Madrid-Kuser sound design almost destroyed the first act with sound-balancing issues that made the lyrics mushed, garbled and unintelligible. Also for the most part the cast does not know the difference between rock, shrieking, screaming, mediocre singing and a Broadway sound. Thankfully as if by a miracle things get better in the second act. 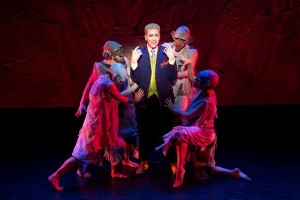 Who shines in this piece about death, time travel, dinosaurs and the end of days is Brian Charles Rooney as Satan’s first born. He is is electrifying, lighting up the stage with his presence. You pray for more of him and less of everybody else. He understands rock, acting, performing and embodying a character. Also coming off spotless is Brendon Malafronte as a dino dog with as much personality as Muttley. 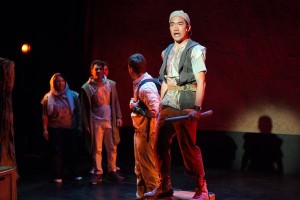 Adapted for the stage by Stacey Weingarten, In act one we follow Thomas (Carson Higgins), a physicist who has invented time travel so he can bring his beloved wife Oriel (Gabrielle McClinton), back to life. Since time travel is new he miscalculates the time and instead of landing in 1989 he ends up in land of raptors and pterodactyls. He is befriended by Hawking (Brendan Malafronte) a dino rodent dog with a hilarious personality. As we wait for him to get back to the right time frame we learn about he and Oriel meet and fell in love with a confusing three part Thomas. There is the narrator version, the flashback (Michael Jayne Walker) and the dancing one (Devin Richey). There is also a dancing Oriel (Ashley Talluto). Somehow one of the Thomas’s has started the apocalypse. Though how is beyond me considering Oriel has been having nightmares of them since they met.

In act two we are on the future where King Simius (Brian Charles Rooney) has turned people into zombies and the world into a waste land. Here Oriel is Uchefuba who is a seer with a teenage son Finn ( a well sung (Jackson Perrin).

All during the show there is a strange person (I think in drag) singing stratospherically with the band. That character is The Archangel Raguel (Larry Hamilton), but who this was I have no idea. This was the most confusing part of the whole show. Who is this person? And why the God forsaken arrangements (Dana Levinson) because it hurt the sound.

The book is confusing, the staging (Stacey Weingarten and Donna Drake) inventive (especially the puppetry), the cast uneven, the choreography a mismatch and needed polishing and the score rocking. The projections were amazing and well thought out.

Ludo’s Broken Bride could have an audience, but this show needs way more development and a solid script and cast.