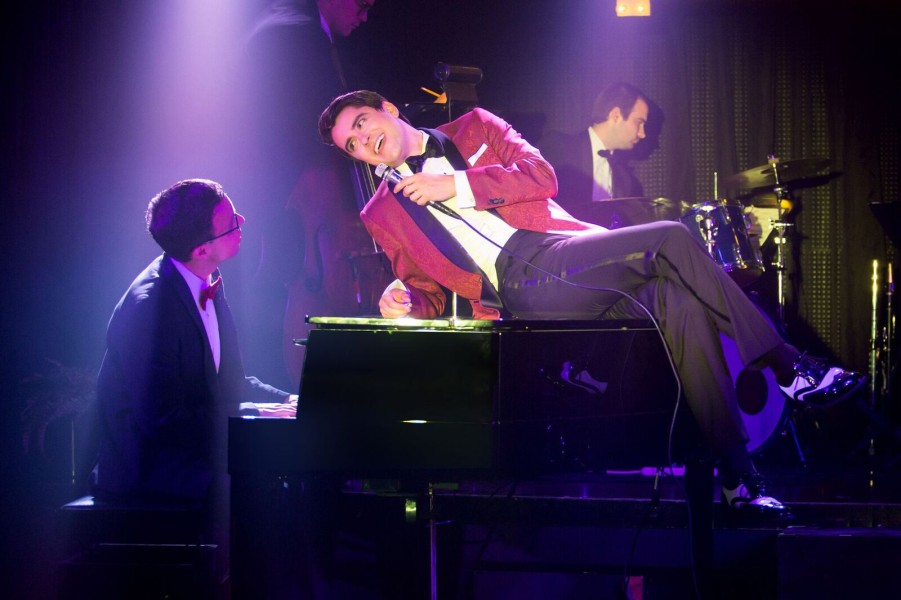 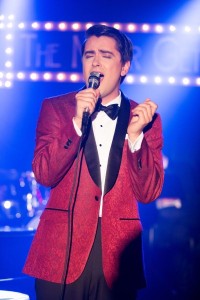 What if you get to relive one moment in your life over and over, what would you pick? What if that moment does not end the way you want it to and you are forced to live that moment over and over in hope, what then? Sam Bolen and Mark Sonnenblick’s (Book, Music Lyric’s), new musical Midnight at the Never Get, asks these questions, as you follow the romance between Arthur (Mark Sonnenblick) and Trevor (Sam Bolen). 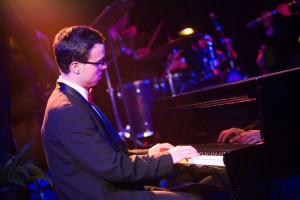 The show starts somewhere in the after life as Trevor is waiting for his love Arthur to show up. In the meantime a stand-in is playing the Arthur that was allows us to see the past. Trevor leads us through the relationship starting with their first meeting at a bar in the Village. Trevor a flamboyant outgoing singer goes up to the shy talented songwriter Arthur. The pair not only become lovers but a team performing in a gay bar with a stage called “The Never Get.” Run by a transvestite named Sister Etcetera, this is a place where the homosexuals at the time could be themselves. Their act consists of singing songs with pronouns that state who they really are. Such as letting people know they are gay and in love with men, in a time when this meant prison or worse.  As the duo gain popularity, they record demos and are finally are heard by Columbia records. The record company wants Arthur, but he turns it down because they want to replace the gay pronouns. Arthur who has not been happy with the way the gay movement has been going, starts to get work in Hollywood leaving Trevor behind. As Arthur becomes more and more successful Trevor tries to blot out the truth of what has truly transpired.

The show chronicles the gay movement from being arrested for just congregating, to Stonewall and the riots. Real places and facts intersect with human emotions and pain. 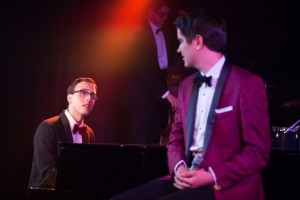 Mr. Bolen and Mr. Sonnenblick, are incredibly talented. Mr. Sonnenblick score is catchy, smart, an homage to a time gone by and relevant to today. The script is touching, warm, real and moving especially end when he breaks our hearts. Mr. Bolen is a star channeling Liberace, Judy Garland and himself. At times his voice is a little strident and he pushes a little to much, but then he reaches his groove and things even out. What he excels in is acting. We see the venerability hidden underneath this “TADA” personality and it adds to the reality of what is really happening. Mark Sonnenblick as Arthur plays a great piano and provides the perfect foe to Bolen, yet he has his moments and we see the journey through each others eyes. When he bursts out the truth, it is that much more devastating because of his subtlety.

Max Friedman direction keeps us guessing and doesn’t try to trivialize the emotions that are bound to effect an audience.

The orchestra led by Mr. Sonnenblick on piano, Josh Bailey on Drums, Walter Stinson on Bass, Brian Krock on Reeds (Alto Sax, Clarinet and Flute), Jonathan Challoner on Trumpet and Nick Grinder on Trombone are all first rate.

Midnight at the Never Get deserves a first rate run at an Off-Broadway theatre or a club. This is sure to be a cult hit like Hedwig.

Suzanna BowlingJuly 28, 2022
Read More
Scroll for more
Tap
Strange Country is a Tale of Woe For Addicts
NYMF’s Nickel Mines A Day Not To Be Forgotten