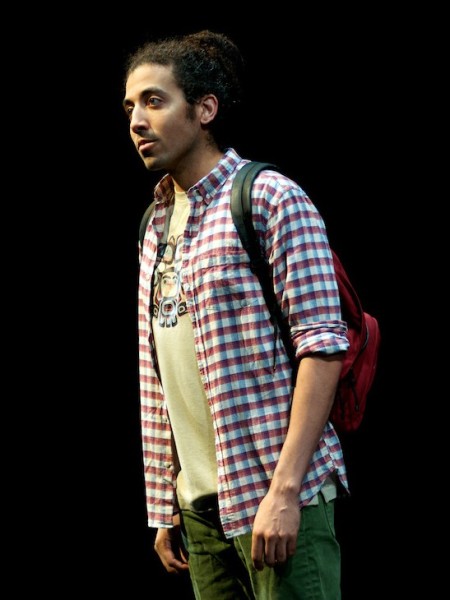 NYMF’s Newton Cradle The Best In the Fest!

NYMF’s Newton Cradle The Best In the Fest! 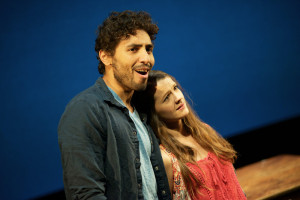 After seeing seventeen shows, an event and a reading, I can say without a doubt that Newton’s Cradle is the best of the fest. This heartbreaking and heart warming musical about autism, not only captures the honesty of human emotions, but has a score by Heath Saunders, that is breathtakingly exquisite. There is not one element, that is not superbly executed. In her directorial debut Victoria Clark, best known for starring in twelve Broadway shows, wining a Tony and being nominated three more times excels. Ms. Clark, knows that it is the nuances and clean storytelling, that sets musicals apart. It helps that the book & additional lyrics by Kim Saunders (Heath’s and Trent’s mother) are so well thought out, much like 2012’s Falling. 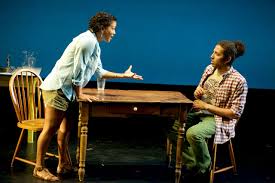 Set at the Newton’s family’s cabin outside of Alaska, we see time collide, in and out much like how an autistic person sees life. Memories and thoughts overlap as Evan (Heath Sanders, yep the composer), a young autistic man views his relationship to those he loves and the twists and turns the road has taken.

The show takes place in three time frames. The first is when Evan is young and his mother Audrey (Andrea Jones-Sojola) knowing that her son is special, is now pregnant with Michael (Trent Saunders). Even from the start, as Michael is in her womb Aubrey make him responsible for Evan. Audrey creates games for Evan to help him deal with his mind and introduces him to photography. Nate (David Dewitt) Evan’s father loves his son, but distances himself from the family, until an accident makes him become more responsible than he wanted. When Evan brings his girlfriend Charlie (Rachel Kara Perez) home the father has his doubts.

Part two, is Evan asking for Charlie’s hand in marriage, when she doesn’t immediately say yes, it unleashes a flood of memories as to when he and his brother were close and Michael brought his fiancé Chelsea (Rose Hemingway) soon to be wife home. Which is the third part of this puzzle.

Issues of what do you do if one child is autistic and you are pregnant, will that child have that same trait? What do you do if one child is so much more needier than the other, what happens to the normal child? Can a marriage survive this kind of trauma? Can the autistic child have a normal life? These are the issues that are dealt with in a realistic way. In “A Brief History of Croquet” and “Croquet, Versus the World” we see how Evan has and will always win unless Michael can break free. When Michael sings “Nothing Compared to You,” about how he was always invisible compared to Evan, you see just how much pain he has been in.

Heath Saunders is truly a force to be reckoned with. His portrayal of Evan is raw, inquisitive, funny and consuming. His music is like Adam Guettel’s or Andrew Lippa’s where classical lyricism meets with a contemporary folk twist. This kind of music can drop you into the heavenly spears or drop you into gut retching reality. If this show had a CD I would buy it. Mark my words Mr. Saunders will be winning musical accolades and lots of them.

As for the rest of the cast they are uniformly good. Trent Saunders is Heath’s real life brother and a wonderful actor. He is currently the understudy across the street at Aladdin. We completely understand when Evan proposes to Rose Hemingway. She makes Chelsea, so sympathetic that she is easy to fall in love with. Rachel Kara Perez, as Evan’s girlfriend creates a woman who can overlook a challenge, yet is not willing to give up herself in the process. She sees what is in front of her but is full of acceptance. David Dewitt as the father is like every father, even those without special needs kids, distant and blame free. They live in their work and think their wives should hold down the fort without any support except financially. Andrea Jones-Sojola as Evan’s mother has a voice like Audra McDonald and her voice soars in this music. Her journey is also a layered and strong presence.

The playwriting, is smart and does not dumb down and keeps the whole piece organic. Choreographer and associate director Sara Brians keeps the show in movement blending dance with everyday steps.

Newton’s Cradle makes us examine not just those who are different, but the impact it has on all those around us. Somewhere there is a balance and Newton’s Cradle does it in a musical uplifting journey. This is truly a family affair. Bravo!