NYMF’s Nickel Mines A Day Not To Be Forgotten

NYMF’s Nickel Mines A Day Not To Be Forgotten 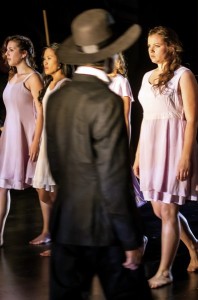 On October 2, 2006, a shooting occurred at the West Nickel Mines School, an Amish one-room schoolhouse in Lancaster County, Pennsylvania. Charles Carl Roberts IV took hostages and shot  ten girls (ages 6–13), killing five, before committing suicide. The Amish community immediately forgave and pardoned the killer and his family. As a matter of fact they accepted the family into their community with love. 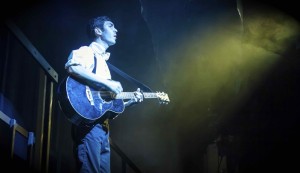 A new musical originally developed at University of California, Irvine, by Andrew Palermo (Allegiance, The Other Josh Cohen), Shannon Stoeke (book), and Dan Dyer (Music and Lyrics) Nickel Mines, seeks to open the doorway to what happened that day. Using monologues, a country score and several modern dance movements choreographed by Andrew Palermo to move the story, what should have been emotionally gripping is not. It is a beautiful tribute, but is missing some major points. We hear the killers name countless times almost glorifying him. The story skips the fact that Roberts told his wife that he had molested two young female relatives (between the ages of 3 and 5) 20 years previously (when he was 12) and had been daydreaming about molesting again. One note Roberts left behind indicated his despondency over a daughter who died approximately 20 minutes after birth nine years earlier. He stated that he had “been having dreams for the past couple of years about doing what he did 20 years ago and he has dreams of doing them again.”The two relatives whom Roberts said he molested 20 years ago told police that no such abuse had ever happened, however the girls had been lined up standing against the blackboard, and some molested to varying degrees. One girl stated “Roberts ‘did worse to (her friend) than to her.” This is powerful, haunting, disgusting and needed to be in the piece.

Though compelling and dynamic this story is basically of redemption for a killer, is seriously hard to take. I realize the Amish community within hours forgave not just the family of the killer but the killer himself.  The problem is upon hearing this story the audience will and can not forgive someone that would pull off such a heinous crime. This killer had a wife and there children and his crime will effects more than those 10 girls and their families. Who this show will play well to is the Christian community. Because we learn virtually nothing but fleeting moments from the victims or the killer himself we instead build our relationship with the killers wife (Marisha Castle) and mother (Josephine Rose Roberts) and Samuel (Morgan Hollingsworth) our storyteller who is done with the Amish but we never learn the reason for the break.

This is a talented cast with direction (Palermo), costumes (Sera Bourgeon) and lighting by Howard Binkley serving the piece well.

As Nickel Mines seeks to forgive the killer, I choose to remember his victims.

Rosanna King, 6 years old, was removed from life support at Milton S. Hershey Medical Center and sent home at the request of her family. She was still greatly impaired from the shooting and remains at home. She has serious brain injuries and does not walk or talk. Rosanna uses a wheelchair, but is said to recognize family members and frequently smiles.

Rachel Ann Stoltzfus, 8 years old, returned to school in the months after the shooting.

Barbie Fisher, 11 years old, was pitching in school softball but had undergone another shoulder operation in hopes of strengthening her right arm.

Sarah Ann Stoltzfus, 12 years old,  did not have full vision in her left eye but was back at school — she had not been expected to survive.

Esther King, 13 years old, returned to school in the months after the shooting, graduated and works on the family farm.