NYMF’s The Gold The Timing Couldn’t Be Better

NYMF’s The Gold The Timing Couldn’t Be Better 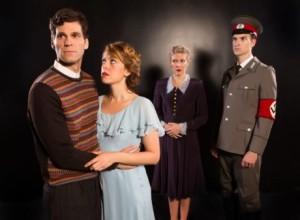 The Gold, one of the new entree’s for the New York Musical Festival has a book, music and lyrics written by Dr. Philip Yosowitz, a Houston plastic surgeon. Andrea Lepcio co-authored the book, actually has credits in writing plays. The piece is epic in scope and is over 2 1/2 hours long. I guess that is short considering the show was developed from Yosowitz’s original 450-page manuscript about the Olympics and the Holocaust. The problem with the following is that the show never truly comes together. It all sounds and reads like so many other stories on the Holocaust. By the end the show is so in your face politically, that it is a turn off unless you are Jewish and have ties to this that go beyond what you are watching. I know my Jewish friend s will love this just as they loved The People In The Picture which is a better written show.

We begin at the 1936 Olympic trials and Joseph Cohen (Josh Davis) and Karl Fritzsche’s (Steven Grant Douglas) quest for an Olympic medal in boxing and the love of Sarah Anderson (Karis Danish). Sarah chooses Joseph because he is Jewish like her and has the same dreams of  “What’s Worth Fighting For.”As the Nazi’s come into power Karl joins them and wins the Olympic gold due to some shady circumstances. Joseph and Sarah have a child Aaron (Graydon Peter Yosowitz). When it is clear the Nazi’s are going to take them Sarah and Joe give Aaron to Karl’s sister (Jenn Malinke) to take care of. Aaron bonds with another girl in the same situation Julie (Stephanie Ticas). When Julie is taken to Israel and Aaron to Chicago the two write. Years later in 1955 Aaron (Adam Magio) is lead to Israel to see Julie (Emily Krong) and reclaim his roots. Now a boxer he reunites with his father who he thought was dead. As a memorial for is resurrected the cast sings again and again “Never Again.”

We never really get to know the characters except Aaron and Julie as the script is so choppy. Nothing is really fleshed out and what is doesn’t help the plot line. The direction by Spiro Velpoudos doesn’t help as each scene just seems meshed together instead of flashed out. The songs are almost all like short abbreviated anthems sounding like cuts from Les Miserables, Miss Saigon and Phantom.

Broadway’s Josh Davis, gives a powerful performance and the story should follow him more. All the Aaron’s and Julie’s also give stand out performances. Ms. Danish, sings well but needs to work on her strident speaking voice. Ryan Spearman adds an element of hate that gives the show some contrast.

Meganne George’s scenic design, was very much like Rocky with a boxing ring, that became Germany, the U.S. and Israel.

This is a show that has a built in audience, but it needs to be fleshed out with writers and a team that know what they are doing. The Gold’s timing couldn’t be more perfect with the olympics happening this weekend.