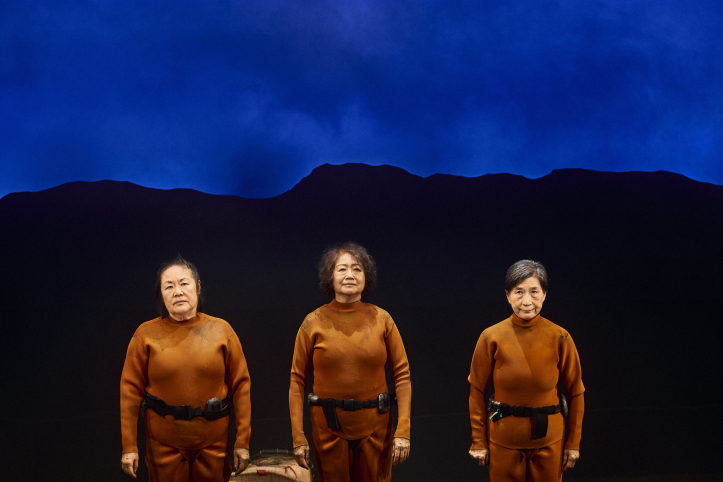 The play that we dive into at the always inventive New York Theatre Workshop, finds the ways and means to scrounge the bottom of the ocean blue to capture a thrillingly meta-magnificent way to discuss race, culture appropriation, and intent. It’s starts out with a naturally appealing spotlight introduction, as if we are tuning into a National Geographic television special. “I Love Television!” is shouted out with a feisty glee by one of the three elderly Endlings, and we take in her pleasure, even as the other has a few choice words in opposition to her joyful statement. Set forth for our inspection by playwright Celine Song (Tom & Eliza), the three are, as the definition of the titular noun states on Jason Sherwood’s (NYTW’s Sojourners, Her Portmanteau) dynamic set: “the last known individuals” of their kind. And we are honored to meet them.

They are three wise and wonderful firecrackers diving into the waters in their own unique and detailed way. Standing upright before us in a pool of water and sunshine, courtesy of the striking lighting design by Bradley King (Broadway’s Bernhardt/Hamlet), with co-sound design and original music by Elisheba Ittoop (NYTW’s An Ordinary Muslim) sharing credit with co-sound designer Ien DeNio. But there’s a twist we don’t see coming, as we sit back and watch this clever Korean tale, that is until the crack in the ocean’s floor literally walks in from behind us in the form of Ha Young, a Korean-Canadian Manhattanite in her late 20s who plays the probable real life equivalent of Song, engagingly portrayed by the fascinating Jiehae Park (Sleep).

As directed with a playful precision by Sammi Cannold (NYCC’s Evita), the three elderly ‘haenyeos’, the Endlings of the island, are laid out before us by differing decades: Han Sol in her 90’s, played with wide eyed glory by Wai Ching Ho (“Daredevil”); Go Min in her 80’s by the compellingly caustic Emily Kuroda (“Gilmore Girls”); and Sook Ja in her 70’s, touchingly portrayed by Jo Yang (Comfort Women). They stare out proudly in their wetsuits and grins, outfitted wisely by costume designer Linda Cho (Broadway’s Grand Horizons). Are they symbols of cultural appropriation presented knowingly to get the theatrical commission? Or are they characters that truly inspire the writer and the artist? The dilemma splashes out, never really telling us what is happening beyond the conceptualization of conflict and discomfort. It’s a fascinating contraption presented for us to unpack, even as the White Husband (and fellow playwright), lovingly portrayed by the very game Miles G. Jackson (“The Last O.G.”), is identified and labeled before us for our intricate inspection. The play drowns a bit in the choppy waters of white speak and late coming audience members that fail to add too much to the proceedings, but in Song’s monologue self referential voice, along with the emotional trio working hard at their solitary lives and dynamic portrayals, Endlings finds a thoughtful dissections of complex ideas with meta elastic style.

The white men play within a play on the white sofa, embodied by Matt DaSilva (Ragtime on Ellis Island)as White Stage Manager, Mark Mauriello (OSCAR at The Crown) as White Stage Manager/Turtle, Keith Pinault (A Midsummer Night’s Dream) as White Stage Manager, Andy Talen (Sleep No More) as White Stage Manager, trying to make a point that the audience wants to gobble up inside knowing nods, flailing in the rough deep waters of cultural complexities that don’t find their complete footing on dry land. But in the three elderly women, we find the priceless pearl inside the crusty clam. Or is that really the question that she’s trying so hard to capture and answer in her wide net somewhere off the coast of some barren Korean island; a meta Endlings that makes us question all that we just devoured hungrily without tasting the bitterness of the playwright’s dilemma.