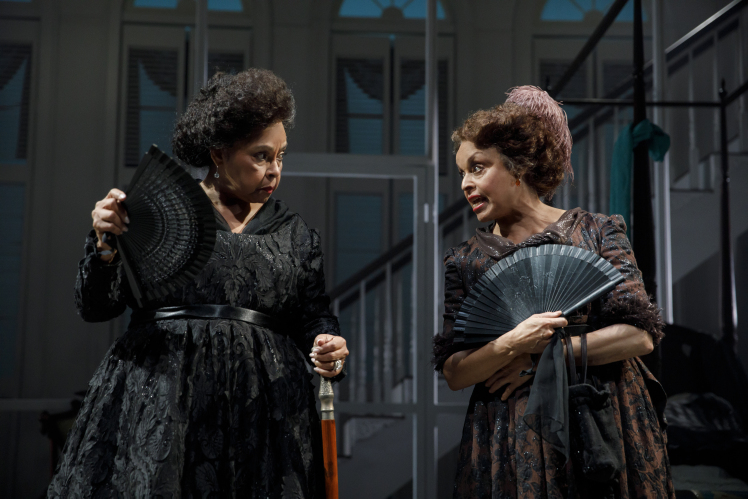 In she strolls. Wailing at the top of her lungs to the heavens above. Dressed in magnificent period black, courtesy of some fine work by costume designer Montana Levi Blanco (Public’s Teenage Dick), Madame La Veuve, played with playful aggression by Marie Thomas (off-Broadway’s Having Our Say), grieves for the whole wide world to see. That is until she gets inside. There, in the safety of her grand house, she seems to tire of the dramatics and sits herself down in the Louisiana heat to try to see her way forward in this new and changing world.  It’s a wonderfully fun and mournful opening to Marcus Gardley’s The House That Will Not Stand, a fascinating discourse on freedom structured and inspired by the famous Federico Garcia Lorca’s The House of Bernarda Alba. Lorca described his last play, which many call his best, as a drama about the plight of the Spanish village woman revolving around the themes of repression, passion, and conformity, while taking a deep and close look at the effects of men upon the women that circle around them.

Playwright Gardley (finalist for the 2014 Kennedy Award for the three-part epic: the road weeps, the well runs dry) tackles the same with a witty and sharp pen, centering his adaptation on a grand house, not in Andalusia, Spain, but in Faubourg Tremé, New Orleans in the early 19th Century.  Racism and white privilege in the new America is a layer added in this complex telling, with the history of its time period playing a key  and dramatic role.

Napoleon has just sold the Louisiana Territory to the United States, throwing the colonial governments and their laws and practices into turmoil. The new arrangement leaves many free women of color and slaves confused about their rights moving forward. In this house, the tension of their future, in all aspects, grips them all tightly, just like those corsets worn by these women on a hot and humid summer’s day. They are suffocating in the disarray, feeling the world closing in on them and squeezing their very existence and air out of their lungs. The Madame’s decades-long lover, the wealthy white man, Lazar, that has made their fine way of living possible, has died suddenly, choking on a fish bone, they say. He lies spread out on the table in the rear of set designer Adam Rigg’s (MTC’s Actually) spectacular, but slightly convoluted living quarters. Large shutters dominate the muddled structure, with a floor plan that overlaps and intrudes on one another while leaving other expanses underused and empty. But those high windows do cast the voodoo spell of luxurious repression upon our entry, bearing down on them like the history we all see coming.

Their slave girl servant, Makeda, played by the versatile and smart tongued Harriett D. Foy (Broadway’s Amélie), steals the show pretty much, especially with her sweet-toothed opening told with breathless anticipatory fits to the meddling Madame La Veuve, played with playful aggression by Marie Thomas (off-Broadway’s Having Our Say). With her good eye glued to Lazar on the night of his tragic death, the story that is coaxed out is hypnotizing, one that sets the stage fully for the desperate acts to follow. Foy’s Makeda is a dynamic storyteller, thinking as much about finding her own pathway to freedom as she does the shiny objects that she collects whenever she can. It’s an intoxicating dynamic she creates blending attachment, care, and personal desire to find her way out of the oppressive heat inside that house.

The social practice of plaçage under which white men and women of color set up common-law households, much like Madame Albans has craftily created, is her place of safety and security, or at least it felt that way before Napoleon sold the Territory and collapsed their world.  Beartrice has three children from her now deceased man, all who want to maintain the freedom and privilege that they grew up within, but that lifestyle is now under siege. Times they are a-changing outside of their high ceiling sanctuary, and as directed with a faltering sense of time and place by Lileana Blain-Cruz (LCT’s Pipeline), the three daughters feel the clock ticking on their own existence.

The oldest, Agnés, played with poise and determination by Nedra McClyde (PH’s A Life) has a plan. With the help of her delightful younger sister, Odette who carries the “dark stain” of her family with empowered grace by the lovely Joniece Abbott-Pratt (Broadway’s Eclipsed), Agnés can envision a way out, at least for herself, and it is just waiting outside at the ball. So with pen and paper in hand, and a deceitful disguise in mind, the two go against the warnings of their straight-laced religious sister, Maude Lynn, played a bit too cautiously by the usually solid Juliana Canfield (TFANA’s He Brought Her Heart…). They bind her hands in a completely ridiculous and supposedly religious manner so she won’t get in the way. It’s all a bit clumsy in its visualization and formulation, but the overall outcome rings decidedly true. Mama wants to believe that they all can find refuge against the coming storm by closing the shutters and nesting to escape the war. But the haunting presence of Lazar has other ideas.

Locked up in the attic hearing the mad spirit voices of the past and future, Auntie Marie Josephine, played with wild-eyed abandonment by Michele Wilson (Broadway’s Sweat), heeds Lazar’s warnings in a comical but intense display. Assisted eventually by the divine Makeda and her voodoo sorcery, they are told that they must get out. Lazar speaks, transcending from beyond in one of the most telling and exciting creations by Gardely and Foy, and bringing to the forefront centuries of history and ceremony cascading out of Makeda’s mouth as if from another dimension. But what is out there inside of Lazar’s idea of escape remains to be seen. History doesn’t seem to create much salvation for these women, and his plea is in direct conflict with the demanding Mama. The final battle of wills is set, between Lazar and Beartrice, and each soul within that house will have to decide on which side of the shutters they want to forge ahead into the future.

Just like Lorca’s deliberate exclusion of any male character from the action, Gardley builds on the coming storm with wind and ancestral drums, ratcheting up the sexual tension with devilish glee. The sound design and original music by Justin Ellington (TFANA’s Winter’s Tale) and lighting by Yi Zhao (NYTW’s Red Speedo) do the job well, forcing the hands of time and history to be played out in wild abandonment and desperation. It’s not the most satisfying Lorca adaptation, especially when compared to the outstanding Yerma that graced the Park Avenue Armory stage just recently, but it is a majestic attempt to tease out the tragedy of these women and the history that storms against them. Will the shutters keep out the winds of change? History tells a different tale than the one suggested by Mama.

Suzanna BowlingOctober 12, 2021
Read More
Scroll for more
Tap
Straight From NYMF: The Gunfighter Met His Match
Between the Sea and Sky Wins Best Musical at NYMF