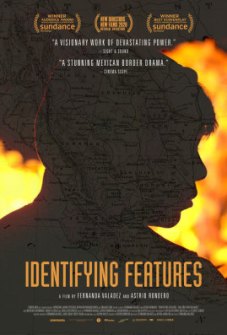 On Friday, January 22nd there will be a screening of Identifying Features followed by a conversation on January 25th.

Middle-aged Magdalena (Mercedes Hernandez) has lost contact with her son after he took off with a friend from their town of Guanajuato to cross the border into the U.S., hopeful to find work. Desperate to find out what happened to him—and to know whether or not he’s even alive—she embarks on an ever-expanding and increasingly dangerous journey to discover the truth. At the same time, a young man named Miguel (David Illescas) has returned to Mexico after being deported from the U.S., and eventually his path converges with Magdalena’s.

From this simple but urgent premise, director Fernanda Valadez has crafted a lyrical, suspenseful slow burn, equally constructed of moments of beauty and horror, and which leads to a startling, shattering conclusion. Winner of the World Cinema Dramatic Audience and Screenplay Awards at the Sundance Film Festival.

Rent the film: Rent the movie via Kino Marquee

Fernanda Valadez (Director and Producer)is a graduate of Centro de Capacitación Cinematográfica (CCC). Her first short film De este mundo, received the best short film award at the Guanajuato Film Festival. It was considered the best Mexican short of the year by the Mexican Chamber of Film Industry. Her graduation short film, 400 bags, was selected for the Editing Studio of the Berlinale Talents and received different awards around the world. It was also nominated as Best Short by the Mexican Academy of Cinematic Arts (Ariel) in 2015 and was a finalist of the Student Academy Awards in that same year. The script of her first feature Identifying Features Sin señas particulares was written with the grant Young Artists of the Mexican Fund for the Arts (FONCA). The project later received funds from FOPROCINE (Mexican Fund for the Production of Quality Cinema) and recently post production funds from EFICINE. The film received the work in progress award of the San Sebastián Film Festival. In 2018 Fernanda received a script writing grant from FONCA, with which she is writing her next feature, Rambler. Fernanda is founding partner of the production companies ENAGUAS CINE and CORPULENTA with which she has produced the films Plastic (by Ricardo Soto, 2015, developed in Locarno’s filmmakers Academy) and The Darkest Days of Us (by Astrid Rondero, 2017, supported by Tribeca’s Latin America Fund and Berlinale Talents Script Station, Nominated as Best First Feature and Best Actress by the Mexican Academy of Cinematic Arts 2019). She is also the producer of the documentary Dear Ana, currently in post production, by renowned director Alejandra Sánchez.

Astrid Rondero (Producer) has received grants and support from Tribeca Film Institute, Berlinale Talents (Script Station 2014, Editing Studio 2010), Women in Film Finishing Fund, Gabriel Figueroa Film Fund among others. Her first feature, The Darkest Days Of Us, obtained 7 international awards as Best Feature in the US, France, Colombia, Santo Domingo and Mexico and was nominated as Best First Feature Film and Best Actress by the Mexican Academy of Arts and Sciences (Arieles 2019). Astrid is founding partner of the production companies ENAGUAS CINE and CORPULENTA. She is post producing an exciting Documentary Film La Colonia by young Mexican director David Buitron. She is currently financing her second feature, Sujo. Her new film script was written with a Grant for Young Artists of the Mexican Fund for the Arts (FONCA 2019) and was invited to the Sundance Story Lab held in Morelia, Mexico, in October 2019.

Amenya Makuku (Moderator) is an independent producer and the new Head of Development for Wilderness Films, with previous tenures at Edward Norton’s Class 5 Films (Thanks for Sharing) and FilmNation Entertainment (Room, Arrival). Her in-depth development background is reinforced by an education in production legal, acquisitions and international pre-sales. Amenya co-produced director Josephine Decker’s Sundance smash Madeline’s Madeline (Berlinale 2018, BAM 2018). She recently produced the TV-length pilot for web-series Addie & Addy. Amenya is in development on a number of film and TV projects including collaborations with Debra Granik, Anne Rossellini, and Joy Goodwin. She is the Film and TV Advisor for The Playwright’s Realm (2017 Pulitzer Finalist The Wolves).