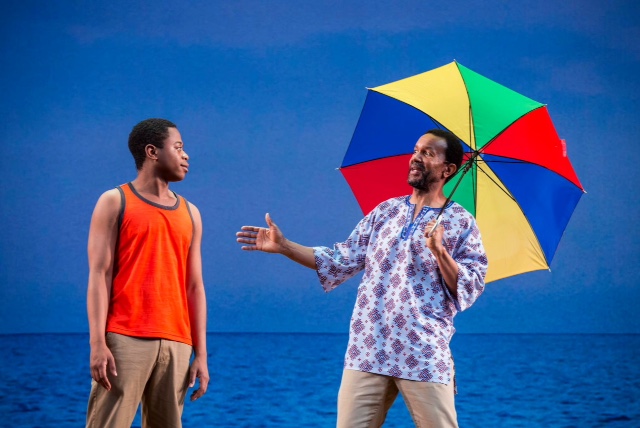 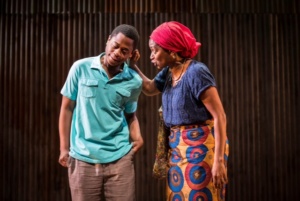 Shakespeare’s Juliet Capulet once famously inquired “What’s in a name? That which we call a rose by any other name would smell as sweet.” A world away from Shakespeare’s lyrical prose, Charles Smith’s powerful and layered new drama, Objects in the Mirror, focuses on a man’s arduous journey across the borders of war-torn African nations to reclaim his own birth name. While physically relocating to the blissful beaches of Adelaide, Australia, our hero struggled under the weight of a past riddled with decisions he cannot outrun. Director Chuck Smith’s intense and wildly engrossing new drama put a necessary human face onto the humanitarian refugee crises.  The plight of everyday life in a refugee camp brazenly portrayed on stage as characters carefully navigated between the real world atrocities of machete carrying warlords, dysentery and starvation.  Based on the harrowing true story of refugee-turned-actor, Shedrick Yarkpai, Objects in the Mirror chronicled his perilous journey from Liberia escapee to his re-settlement in Australia where his journey to identity and self-actualization was just as extreme. 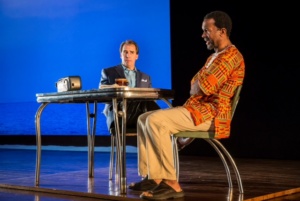 The complex and compelling first act was told primarily through flashbacks. We met protagonist, Shedrick Kennedy Yarkpai (Daniel Kyrl) a handsome and inquisitive young male and African refugee. Knowing his future would be tied to two potentially distinctive paths; either becoming a fighter in the country’s civil war or a victim to the warlord’s wrath, Shedrick’s Mother, Luopu Workolo (Lily Mojekwu) insisted he leave with his Uncle John Workolo (Allen Gilmore) and cousin Zaza Workolo (Breon Arzell) to cross boarders in war-torn Africa in hopes of relocation to the United States. Facing unspeakable hardships during their journey, the family eventually settled in a refugee camp and waited, for years, for reassignment. Growing impatient, cousin Zaza fled the camp only to fall victim to a warlord’s machete. Sensing danger lurking around every corner, fiercely determined Uncle John had Shedrick switch visas and identity’s with his cousin Zaza. Upon their eventual relocation to the oasis known as Australia, the bonds that usually strengthen familial ties began to suffocate the young man. Working for an affluent Australian attorney, Rob Moser (Ryan Kitley) Shedrick inquired about reclaiming his name and identity. It turned out, that could be accomplished by filing out and submitting a one page form with immigration. Well, nothing so important could be just that simple. If Sherrick/Zaza submitted the corrective documentation with immigration, it could easily be the unfolding of Uncle John’s complicit deeds that would cost the entire family their Humanitarian visas, once again forcing them back to the refugee villages in Africa. The remainder of act two was the fallout and the power struggle between Yarkpai’s two main supporters, his uncle and his boss. 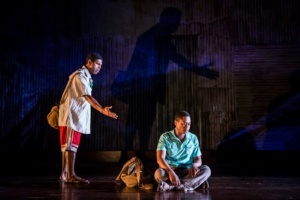 The amazing quintet cast electrified the stage. The personal struggle within Daniel Kyrl’s Shedrick/Zaza was deeply engaging to view. His political and personal struggle certainly intrigued and absorbed. Ryan Kitley’s attorney was not just written as the clichéd white savor, he really did feel compelled to assist Shedrick. Allen Gilmore’s Uncle John became the substantive heart and soul of the play, if not the tale’s moral compass. His portrait of a man willing to continually forge forward through personal consequences and unimaginable sacrifices, continually stretching the truth to protect his family, are the things that should be rewarded with award nominations. The tension in the act two scenes between Gilmore and Kitley are intentionally uncomfortable, yet perilously riveting. Both men wanted the “best” for the young ward, but both clung to very different definitions of what that “best” should actually look like. As his mother, Lily Mojekwu, was as fierce as a performer gets. Her role was small but pivotal, the high point, her act two phone call scene with the son she hadn’t spoken to in years. This emotionally satisfying vignette had my eyes watering and my heart overflowing. 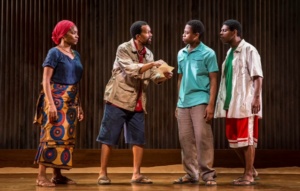 Helping to craft the world of this traumatic true story, Riccardo Hernandez’s outsized sets, mimicking the roof tops of the refugee camps in Africa, to the stoic solid, clean lines of the lawyer’s home and finally a stage-wide Australian beach scene, complete with requisite sand. Punctuating the sets, John Culbert’s lighting design, representing the oppressive noonday Australian sun or the dark, densely populated jungles of war-torn African countries Liberia, Sierra Leone and Guinea. Helping to guide the landscape of the story as well as the characters journey, background projections crafted by Mike Tutaj. Birgit Rattenborg Wise’s real world costuming added much needed color to the lives of these characters that would otherwise register as bleak. 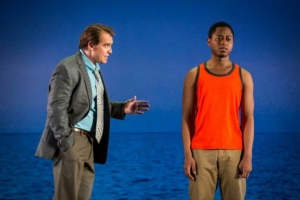 Based on the harrowing true story of the man at the center of the action, Objects in the Mirror is an unapologetic and highly engrossing new drama now playing at the Goodman. The title is a play on the expression “objects in the mirror are closer than they appear,” a safety warning normally engraved in passenger side automobile mirrors. Here those objects are played both physical and metaphorical. With questions about what fundamentally makes a man, his past, his present, his name or his actions, the audience was challenged by rapturous individual performances and terrific, engaging writing. Writer Charles Smith and director Chuck Smith wove a absorbing tale where everyone’s hands may often get dirty, but that dirt is always for the greater good. See this electrifying production while you can. It will stay with you long after you have exited The Goodman’s mainstage.

Goodman Theatre’s Objects in the Mirror is now playing through June 4, 2017