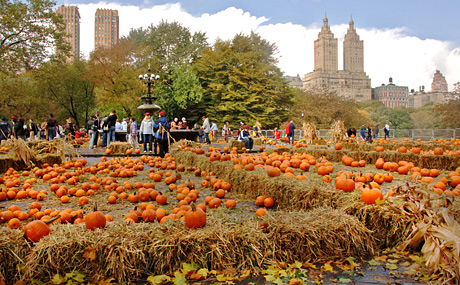 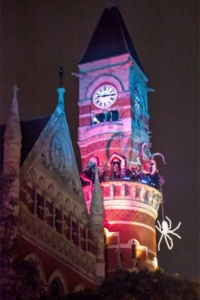 Fall is in the air as film festivals, masquerade balls, art, pumpkins, haunted houses and parades come into play. Mark your calendars now, so you don’t miss out on all the fun.

10/ 1 – 29: Boo at the Zoo features costume parades, magic shows, a hay maze, a haunted forest, pumpkin carvers, and treats at the Bronx Zoo and is included free with all tickets. Weekends plus Monday Oct. 9.

10/1 – 31: Archtober offers special tours of buildings (some by boat), lectures, films, and exhibitions that help us to appreciate architecture and design in everyday life.

10/3 (6 p.m.): Watch the Parade of Boats, including working ships, historic sailboats, magnificent yachts, and fireboats, as a narrator describes their history and purpose at Pier 62. Free unless you attend the dinner on Pier 61.

10/4 (6 p.m.): Get in line to buy $1 pizza samples from dozens of New York City’s best pizzerias at Slice Out Hunger in St. Anthony’s Church to support charity.

10/5 – 28 (Thurs. to Sat.) Chihuly Nights transforms the grounds of the New York Botanical Garden in the Bronx into an enchanted world of lit artwork, with music and cocktails for sale. 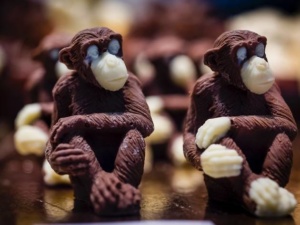 10/6 – 8: Meet chocolatiers, artisans, and chefs at The Big Chocolate Show, with demonstrations onstage, master tasting classes (extra), chocolate and cocktail tasting on Friday, and family day on Sunday in Chelsea.

10/6 – 11/4: Intense, creepy actors confront you in the labyrinth of passageways at Blood Manor, 163 Varick Street. Not for pre-teens.

10/8: Hear great songs from stage and screen at Elsie Fest in Central Park. 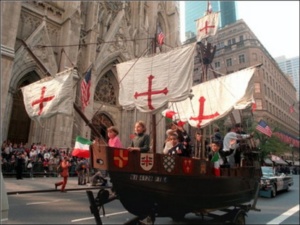 10/12 – 15: You never know what to expect when Art in Odd Places brings visual and performance art to nearly the entire length of 14th Street. The 2017 theme is sense. Free.

10/13 (7 to 11 p.m.) Cocktails for a Cure is an “inspiring evening complete with the hottest music, signature cocktails, and premier cuisine” including restaurant hors d’oeuvres, a photo booth, an open bar, a karaoke room, and two DJs on two floors at Up&Down to support charity.

10/13 – 20: The Imagine Science Film Festival has a different theme every year. In 2016, it explored “light” in all its forms and meanings, from photons and photography to shadows and color perception.

10/14 – 15: Visit 275 of the city’s architecturally and culturally significant spaces and places (many closed to the public) during Open House New York Weekend. Most locations are free, but almost half require reservations.

10/15 (12 to 5 p.m.): Buy a pickle on a stick or other pickle-themed food, take part in games and activities, and hear live music at Lower East Side Pickle Day on Orchard Street (from Delancey to E. Houston), where vendors once sold pickles from barrels. Free. 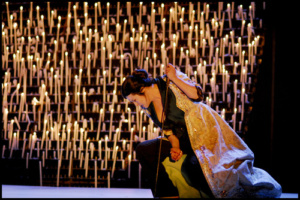 10/18 – 11/ 15: See world-class performances, films, and artist talks with a focus on music during White Light Festival at Lincoln Center for the Performing Arts.

10/19 – 22: See films about the world’s favorite foods and then eat them at the NYC Food Film Festival at AMC Empire 25.

10/19 – 24: NewFest screens a variety of gay and lesbian films at Cinépolis Chelsea.

10/20 – 21 and 26 – 30: Doors slam, floorboards creak, and voices call into the night during evening Candlelight Ghost Tours at Merchant’s House Museum. 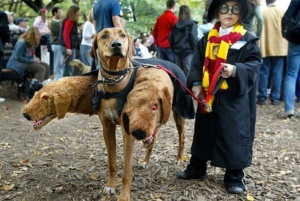 10/26 – 11/5: The audacious new ballet The Red Shoes, based on a beloved fairy tale, tells the story of a ballerina forced to choose between an affair of the heart and her rapturous love of dance at New York City Center.

10/27(7 and 10 p.m.): Watch a silent classic horror film with live organ, and then see an immersive show of fantastic creatures that surround you at Halloween Extravaganza at The Cathedral of St. John the Divine.

10/27 (10 p.m.): Danse Sauvage Halloween Ball by Dances of Vice promises “provocative performances that delve into animalistic fantasies and fever dreams” with costumes required (preferably “feral”) and a no-host bar at Capitale for age 21+.

10/27 – 28: Bring a flashlight for a guided tour of the crypt at The Cathedral Church of St. John the Divine, and hear stories about the entombed, during Crypt Crawls for ages 12+.

Halloween at the mansion

10/27 – 29: Bring photos, candles, and marigolds to remember the departed at St. Mark’s Church-in-the-Bowery during Day of the Dead, with food and crafts for sale. Free.

10/28 (11 a.m.): LC Trick-or-Treat includes candy, crafts, photos, a costume parade, and a film at Lincoln Center. Free but arrive early to get a ticket, one per person.

10/28 (8 p.m.): Watch “otherworldly performances featuring the wonders of the circus, the sideshow, the opera, the dancehall, and the theatre” when Underworld Circus transforms Masonic Hall NYC into the Halls of Hades at 46 West 24th Street.

10/28 Kids can come in costume for trick-or-treating, magic shows, craft projects, music, and live storybook characters at the Halloween Celebration at the American Museum of Natural History.

10/28: Mix, mingle, frisk, and frolic to DJ tunes with crowds at the Masquerade Ball in the grand opulence of Capitale for age 21+.

10/28 – 11/1: TEFAF New York Fall Fair features exceptional fine and decorative art from international galleries at the at Park Avenue Armory. Repeats in May. 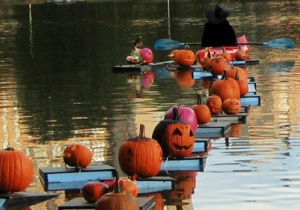 10/29(4 to 7 p.m.): Wear a costume and bring a carved pumpkin (see rules) to Halloween Parade and Pumpkin Flotilla for spooky music, crafts, a parade, and twilight pumpkin float at Charles A. Dana Discovery Center. Free.

10/30: Famous actors are among the cast at 24 Hour Plays on Broadway, where you watch six brand new plays created, staged, memorized, and performed in a single day at American Airlines Theatre.

10/31 (7 p.m.) The Amazing Halloween Scavenger Hunt begins at Slattery’s Midtown Pub with clues on your phone that send you around the city performing physical and mental challenges with a Halloween theme.

10/31 Children in costume can get free Halloween candy at Where to Trick-or-Treat with New York City Kids.

10/31 (2 to 5 p.m.): Wear a costume or mask to Spooky City to enjoy a haunted scavenger hunt, spooky tales, a Monster Mash Dance party, and pumpkin decorating at the Museum of the City of New York. 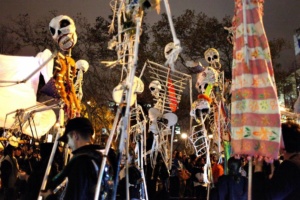