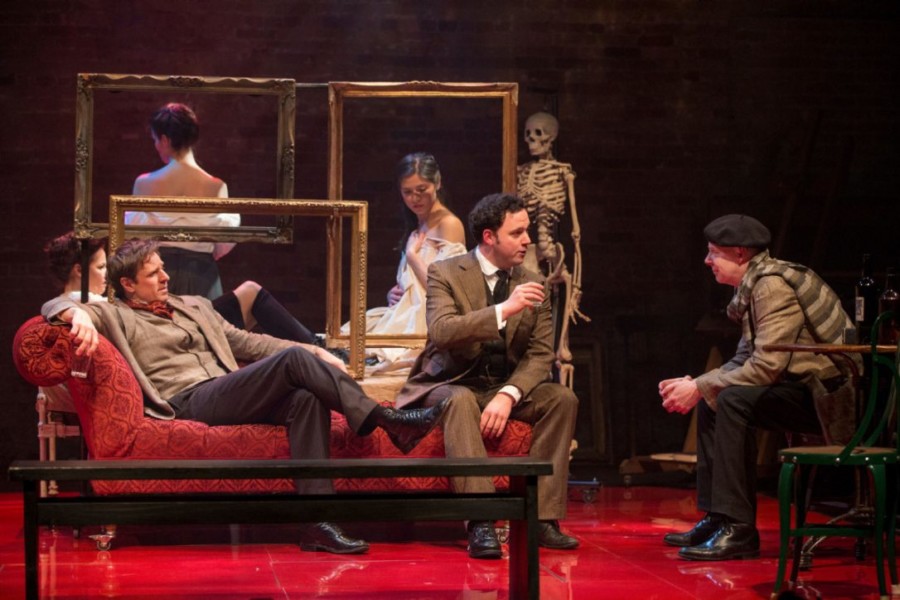 Of Human Bondage: A Finely Woven Tapestry from SoulpepperNYC

Of Human Bondage: A Finely Woven Tapestry from SoulpepperNYC 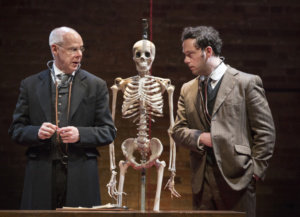 Addiction, obsession, and desire are weaved intimately together in Soulpepper’s newest production that has opened at the Pershing Square Signature Center.  Of Human Bondage, written by Vern Thiessen based on the novel by W. Somerset Maugham, is a deeply rewarding piece of theatrical art making. It has been crafted in the same grand scale as needed to create a Persian rug made of finely woven threads of glorious shades and textures. Each fiber representing moments of pleasure but also, quite strikingly, there are those made from pain and hurt. Bad choices are equal to good ones, in the creation of a life, and combined, these various strands create a beauty and an art of the sublime. Only later, life gives us the moment to stand back and see all of the distractions, pit-falls, and obsessions, combined with all the good fortunes and loyal friendships that can create a tapestry that is worthy of a life lived.

In a note from the director, Albert Schultz writes about creating two aesthetic challenges in creating this wonderful piece of theatre. In collaboration with the design team (Lorenzo Savoini/set and lighting; Erika Connor/costumes; Mike Ross/composer and sound designer), these artists found ways to expand and simplify this compelling story. For one, they created a symbolic cage for Philip Carey (intensely portrayed by Gregory Prest) to live his life in. A sixteen foot square of blood red floor that he can never leave, trapping him inside himself and his decisions.  The book tells a life story that is much more expansive than this small chapter of his adult life, but here he slowly weaves his way through within this small space and moment of time, which is his self-created confinement.  The other unique and surprisingly clever challenge set forth to the actors of this fantastic ensemble, is that any sound (vocal, musical, or atmospheric) must be made by the eleven that inhabit and remain on stage.  From the first moments of the the flute’s delicate and sad tones and the echoing and eerie sounds from the numerous bows playing the bass violin, the theater is filled with the most astounding soundscape. The use of created sounds is particularly astounding, especially in moments that aren’t necessarily demanding of these environmental additions. Together, they expand the experience of so many singular moments, like the cacophony of sounds encountered as they navigate the streets of London circa 1900’s, to the clanking and chattering inside a tea shop.  These intricate sounds, like the thud of Carey’s limp, and the wave’s lapping at water’s edge, are like fine golden threads snuck into a fabric’s creation to give it a shimmer that is barely identifiable, but takes something already beautiful into the sublime.

The more visual threads in this creation is the utterly fine story-telling of Theissen’s adaptation, Maugham’s novel creation, and the superb performances of all that grace the stage. This Canadian group of actors (who I am told also will be gracing the stage when I see Soulpepper’s adaptation of Edgar Leee Masters’ Spoon River Anthology by Mike Ross and Albert Schultz), weave a performance that is seamless and intense. Gregory Prest as the fictionalized version of author Maugham, the struggling artist and doctor in training, excels, giving us a rich and thoughtful portrayal of a man, born with a deformity who has lost his mind to obsession masking as love and care. The object of his blind adoration is Mildred Rogers, played with a superb attention to nuance and manipulation by Michelle Monteith.  For anyone who has had a love that doesn’t love back, but toys with our affections, they will wince with acknowledgment every time she utters the phrase, “if it gives you pleasure’.  They, and the others, Oliver Dennis as Lawson (Dr. Tyrell, & others), Stuart Hughes as Cronshaw (& others), and especially Jeff Lillico as Griffiths (& others) and John Jarvis as MacAlister (& others)  carry an essence of danger and longing, sadness and desperation, death and destruction, and above all, addiction in one shape or another. But there is also compassion and care, especially in the forms of Carey’s saviors, extremely well played by Jarvis (Thorpe Athelny & others) and Courtney Ch’ng Lancaster (Sally & others). There is also kindness from Sarah Wilson’s Norah Nesbit who is given the ultimate thread of dialogue to share with us all, “If you want men to behave well, you must be beastly to them; if you treat them decently they make you suffer for it.” A line we can all understand and find compassion for our leading man as he battles his way to understand this.

Ultimately, this is a story of forgiveness, beyond the obsession and the addiction.  Although certain images will remain with me for a long time coming; the hyper-theatrical and exquisitely upsetting image of Griffiths is just one of them, the over-arching feeling of Soulpepper’s Of Human Bondage, is the thoughtful and empathetic manner Carey can look back at the creation of his life as a beautiful piece of art. One that would be lessoned if any of the threads that represent his pain or his sadness would not be present. It’s a compelling argument to understand personal regret and shame. Thiessen has given us an ingenious retelling of Maugham’s classic tale, one that is far removed from other interpretations. The tale has been thrice made into a film, most exceptionally, the 1934 version that elevated a young actress named Bette Davis into stardom. The company of artists at Soulpepper have created a unique and thrilling production that has only expanded the relatable by stripping the narrative down to its essentials by using every theatrical trick at their disposal. It’s a strikingly modern affair that is unforgettable and exactly what theatre should be.