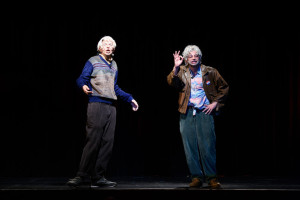 “I hope they don’t consider this racial abuse.” I guess if it’s on Broadway, then anything goes! Well at Oh, Hello on Broadway they are getting away with murder. 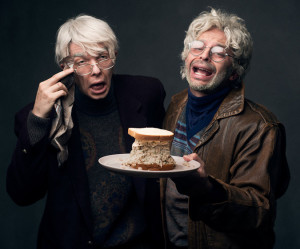 I saw Oh, Hello off Broadway, and was not impressed. Hearing it was moving to Broadway, left me dumbstruck. Seeing it on Broadway hasn’t changed my point of view, if anything it has become even more common place and vulgar.

I do not like dumb and dumber comedy. This act by Nick Kroll and John Mulaney, consists of two curmudgeonly old men Gil Faizon, a “Tony Award viewing” actor, and George St. Geegland, a failed novelist, who have been roommates for 40 years. The characters began their exsistance in a grungy East Village comedy club called Rififi (closed, for good reason). The duo then took these characters to short videos on youtube, which caught on at Comedy Central, who featured them in segments of “The Kroll Show.” Gil and George were the hosts of “The Oh Hello Show,” a parody of “public access prank shows,” in which they served guests overstuffed tuna sandwich. “The Kroll Show” was canceled, and The Oh, Hello Show moved Off-Broadway, where it opened, closed and went on tour and landed on Broadway. Since the duo has been called “two of the hottest voices in comedy.” Personally I don’t get it and The emperor has NO clothes.

This whole show came about because two older men in turtle necks and blazers at the Strand bookstore were buying separate copies of Alan Alda’s autobiography, “Never Have Your Dog Stuffed.” The comics followed the men to a diner, where they sat together reading their separate copies. These guys share a Murphy bed, but would not share their Alan Alda autobiography.

Oh, Hello on Broadway is selling about 6,000 tickets a day at the Lyceum, but will theatre goers realize this is not a play? A series of comedy sketches, where the two try to crack each other up and do most of the time. By the way unprofessional. There is no plot, arc or is it funny. I laughed at maybe one joke. What you get is 100 minutes of stupidity. We get characters who read stage direction, and make fun things that aren’t funny such as the death of Philip Seymour Hoffman.

The” Too Much Tuna” parody’s is lost if you never saw the show and just seem weirder and weirder. The joke a oversized tuna salad is delivered from above to a celebrity guest and in my audience it was Alex Brightman. Though Mr Brightman is talented in this parody he lacks as does the duo.

It’s all an inside joke, that I seriously do not get! By the way a lot of the audience does not get it either.

One of the earlier lines struck me as a summery of this show; “we are like a used Orange Peakoe teabag stain on Broadway.” I will take it one step further to say Orange Peakoe is much too good of tea.

As for Alex Timbers direction, what were you thinking because the show was even worse on Broadway.

If you like vulgar, crass, unintelligent humor run to Oh, Hello on Broadway, if not say good bye to the hype.

Suzanna BowlingNovember 22, 2022
Read More
Scroll for more
Tap
Adam Pascal and Anthony Rapp Celebrating 20 Years of Friendship: Part 2
From Chicago to Dancing With The Stars John O’Hurley is A Man With Standards at Feinstein’s/54 Below