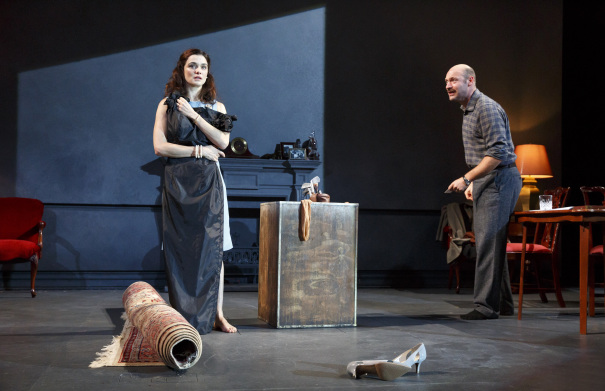 Oh I Got Plenty Of Nothing

Oh I Got Plenty Of Nothing 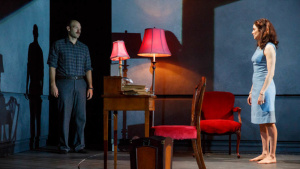 In order for David Hare’s 1978 drama Plenty, to work you must empathize with it’s heroine Susan Traherne, played by Rachel Weisz. The problem is Weisz, who is normally so warm and empathetic is so chilly you can feel the frost. We never bond with her and this character that lives for herself is hard to like, let alone love. After serving in World War II, we are lead to believe she has never recovered and it was her downfall. She comes off as someone who is bi-polar through-out the whole show. In the war she servers as former secret agent, with exciting triumphs, working behind enemy lines in Nazi-occupied France during World War II. In her present life she is the depressed wife of a diplomat whose career she has destroyed. She is self-absorbed, bored and destructive. The disappointment of her choices has given her to madness leaving behind a trail of human wreckage, which she is oblivious to. 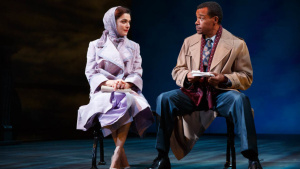 Told in jumbled pieces, like her mind the play does not follow a strict timeline, weaving back and forth. In the hands of David Leveaux the show becomes even more confusing, stark and long (2 and 1/2 hours). 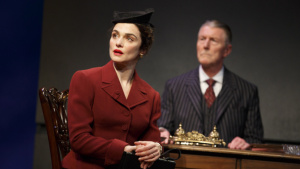 We begin at the end where Susan has drugged her husband Raymond (Corey Stoll) as he lies naked on the floor and is is turning over her flat to her best friend Alice (Emily Bergl). As she leaves we are in the French countryside in 1943. Susan waiting for a drop in the the dark meets British comrade, Codename Lazar (Ken Barnett). The Germans are nearby and the French do not want them.  The two connect in ways that will always last. Flash forward  four years later and Susan is at the British embassy in Brussells, mid-level diplomat Raymond Brock (Stoll) introduces Susan to the Ambassador, whose name is Darwin (Byron Jennings).  Susan’s lover has died and though she tells Darwin it is her husband; Brock knows the truth and wants the girl for himself. Susan eventually marries Brock. Susan’s marriage is in name only. She hates her job and as she takes on lovers, trying to conceive a child by one (LeRoy McClain). She even gets back together with Lazar, but nothing fills the void. As the war’s ends Plenty is just an illusion as is any kind of peace.

Ironically Rachel Weisz, is  currently starring in Denial with screenplay by Hare. Weisz has big shoes to fill. Kate Nelligan, created the role in London and New York and was nominated for a Tony Award. Meryl Streep, played the role in the 1985 film. With the direction by Leveaux and Weisz’s choices in where she takes Susan, Weisz like Diane Lane loses this round. We never feel for her so the last scene seems pointless. As Darwin, Jennings, proves what a  great actor, he is. We totally feel his devastation, the shame and horror of being deceived over the Suez Canal. Stoll fails to make us understand why he would put up with Susan all these years. He conveys his devotion, but not the reason.

Like The Cherry Orchard  Mike Britton’s set leaves much to be desired pushing the chilling distance even farther away.

Suzanna BowlingJune 22, 2022
Read More
Scroll for more
Tap
Theresa Rebeck’s What We’re Up Against Could Not Be More Timelier
The Front Page Is Above The Fold