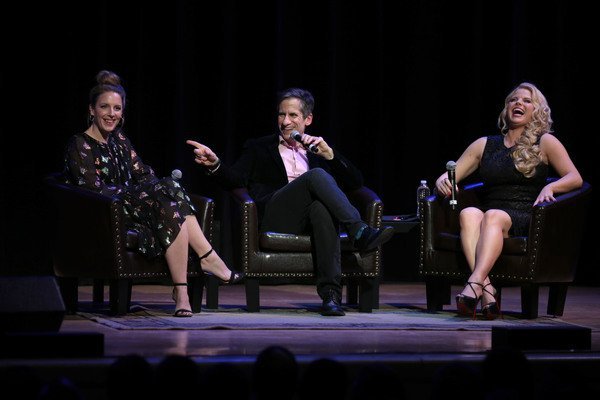 In case you have never been to a Broadway Series at Town Hall, the informative and insightful Seth Rudsky leads his stars to songs he wants, while pulling amazing stories out of them. Monday night was all about tag teaming. Using their middle names Megan Joy Hilty was first with “Just Keep Moving the Line” from Smash.

Megan revealed that Smash was really a big one for her. “Everything made sense until I read that Ivy was a triple threat. That she’d been in the ensemble for years—at least a decade. And I was like, “No, no, no thank you. That means this person is way more talented than I am. I cannot dance to save my life and I don’t want to put myself through dance calls because the ones I’d gone through are not pretty.” I told my manager, “I can’t audition for this. I was terrified when I got it.”

For Jessie Kathleen it was an uplifting “I Feel the Earth Move” from Beautiful.

Mueller hails from Evanston, Illinois and was in her high school production of  Once Upon a Mattress. We were treated to a rare wonderful version of  “Shy.” Ms. Mueller is truly funny and does a great Liza Minnelli impersonation.

Mueller went on to tell the audience about her audition for the revival of On A Clear Day You Can See Forever with Harry Connick, Jr. Working steadily in Chicago theater the casting director called her in. The entire room was there for American Idiot, but she sang “It Might As Well As Spring”, she was asked for a jazzier song and her entire book was full of the same type of material. She went over to the piano player and the jazz version she came up with was spectacular. It was so amazing that I now have a new found respect for Ms. Mueller. Continuing the story, Ms. Mueller couldn’t do the callback for the next day, as she was commitment to a friend’s musical reading. Instead she flew herself to New York and landed the Tony nominated role. Once in the show Jessie told how one night Connick went up on his lines and she had to rectify the situation. Mueller showed her remarkable range singing the jazzy “Every Night at Seven” from On A Clear Day.

Megan showed us her adorable new album, which is a Christmas ornament.

Megan Hilty wanted to be an opera singer, classically singing in vocal competitions since eleven. Having just graduated from Carnegie Mellon she and other seniors did a showcase in New York, for casting directors and agents. Megan thrillingly landed the role of Audrey in a tour of Little Shop of Horrors. When the tour fell apart the casting director had her audition for Glinda in Wicked. At 19 she was assigned as the stand-by for Glinda. She used that time to go on adventures (like finding the best chocolate cake) with her best friend. The first night she went on it was opposite Idina Menzel. Megan got the call that she needed to go on, two hours before showtime, Hilty had never rehearsed in full costume and was terrified. Menzel put her hand on Hilty’s shoulder and saying ‘You got this.’” Hilty still thinks about how incredibly gracious and supportive Menzel was. “I will never forget Idina’s kindness that night.” A rousing Popular was delivered.

Next up for Megan was a thrilling “I Could Have Danced All Night”, complete with high C.

A tour de force “My White Knight” from The Music Man, had two people in the audience in charge and about every 10 seconds, they signaled Megan or Jessie to take over the song. The dueling soprano’s ended together on the high A flat. Now either of these two should play Marion.

Marc Shaiman (who wrote the music and co-wrote the lyrics) came onstage and played piano! Megan sang the stunning “Secondhand White Baby Grand” and then she and Jessie and duetted on “Let Me Be Your Star”!

Jessie gave us “She Used to Be Mine” from Waitress and “What’s the Use of Wond’rin/If I Loved You” from Carousel. Ms. Mueller proved what a tour de force she really is.

Ending with “For Good” from Wicked, The Broadway Series gave a satisfying ending, to a perfect night.

Suzanna BowlingAugust 12, 2022
Read More
Scroll for more
Tap
On The Red Carpet With Anything Can Happen in the Theater: The Musical World of Maury Yeston
National Theatre’s My Brilliant Friend Bravely Climbs Up in Fragments