Oh What A Night With The League of Professional Theatre Women 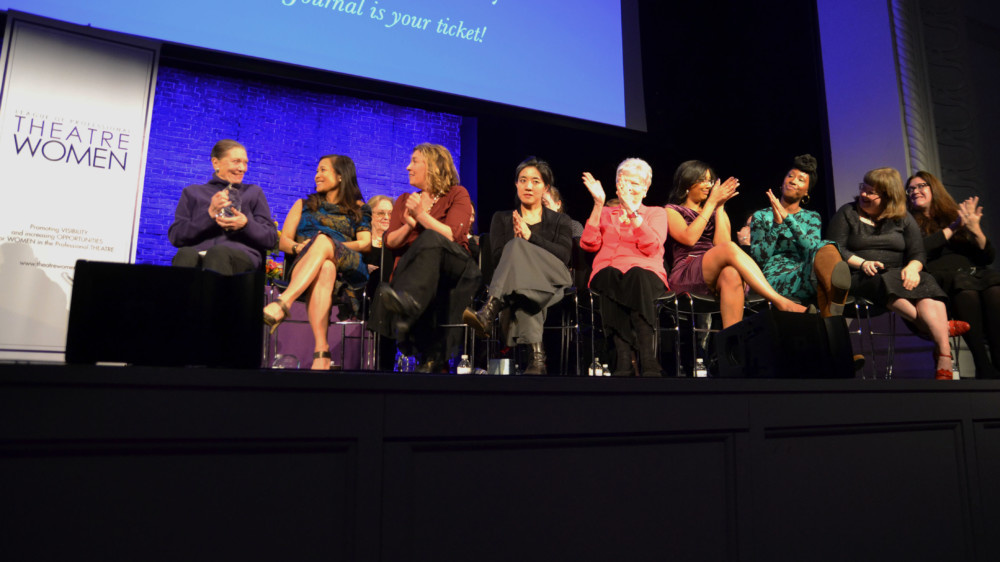 Oh What A Night With The League of Professional Theatre Women

The League of Professional Theatre Women Monday night at The Sheen Center for Thought & Culture (18 Bleecker Street), showed parity means women bonding together make us are alive and well and thriving.

Co-presidents Kelli Lynn Harrison & Catherine Porter talked about the statistics of the women working in theatre. We have come a long way baby, but we still have far to go.

Host Nancy Giles, Emmy Award-winning contributor to “CBS News Sunday Morning,” welcome the room full of successful women honoring the women whose contributions to the field, across all disciplines have changed the lives for others.

First up was the Josephine Abady Award, which recognizes a theatre artist who has created work of cultural diversity, given to director May Adrales by director Emily Mann.

Longtime member acting teacher and author Mari Lyn Henry’s service to the industry was recognized with a LPTW Special Award given to her by her friend Paula Ewin.

Playwright Sarah Ruhl awarded playwright and friend Karen Zacarías the Lee Reynolds Award, given annually to woman in theatre whose has helped to illuminate the possibilities for social, cultural, or political change.

The Lucille Lortel Award and grant, given to artists who show creative promise, was awarded to producer and dramaturg Natasha Sinha by Paige Evans.

LPTW through Alexis Greene bestow another special award on translator, director, and producer Joanne Pottlitzer for her service to the field and her contribution to the League in establishing an international committee.

Scenic designer Christine Jones of receive the Ruth Morley Award, given to an outstanding female theatre designer in memory of costume designer Ruth Morley. This was given to her by Mimi Lien of Natasha, Pierre & The Great Comet of 1812 fame. I love this award because it is a piece of art.

The LPTW Lucille Lortel Visionary Award, was given to aspiring theatre women working outside the parameters of production and the Kilroys, a collective group of female playwrights and producers in Los Angeles who work to promote gender parity in theatre won. Three of the members were there to accept and the joy they felt being recognized was truly joyful

Last up Michael John LaChiusa gifted director and choreographer Graciela Daniele with a Lifetime Achievement Award. Daniele has directed productions on Broadway, at Lincoln Center, the Public Theater, and at regional theatres. Her credits choreography credits include The Visit in Broadway. She’s earned 10 Tony Award nominations, and six Drama Desk nominations. Even after all she has been awarded this meant a great deal to her.

Women honoring women, supporting them and leading the way is empowering and something we should all be doing. Bravo League of Professional Theatre Women for showing the way.