Oklahoma Is More Of An Overcast Day 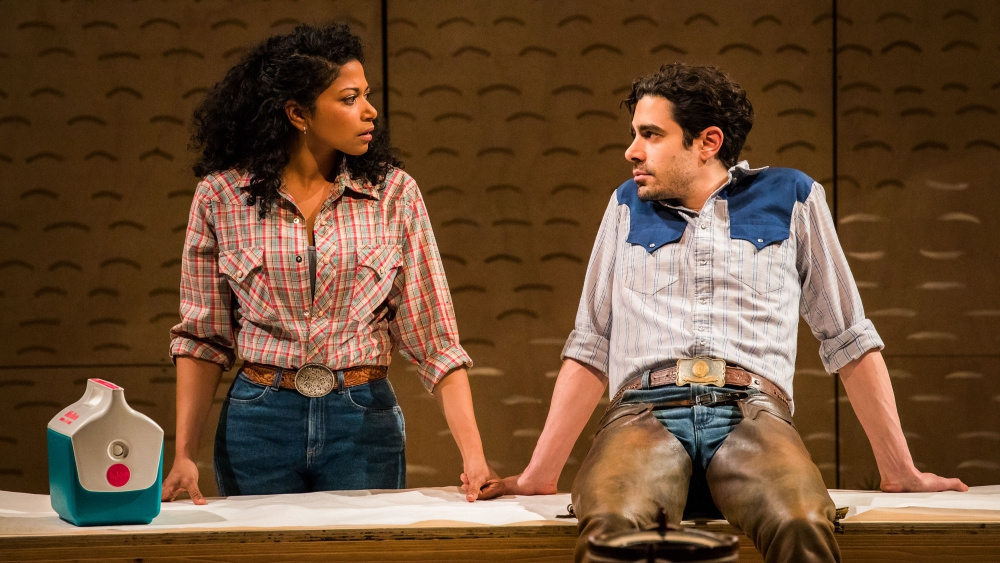 Oklahoma Is More Of An Overcast Day

“Country a-changing”, got to change with it!” Curly to Laurey.

There is a lot to admire and a lot to ponder with Daniel Fish’s production of Rodgers and Hammerstein’s groundbreaking 1943 musical “Oklahoma!” Deconstructed, the lyric’s pack powerful punches; however, they are not always sung well.

I don’t mind shows going against the grain – I actually find that exciting and innovative – but there are key elements that should be adhered to. I expect the singers to sing well, the actors to emotionally move me, the dancing to bring the show to the next level, and consistency in the time frame of where this is taking place. If the text is taking away from that, then the text needs to change.

Oklahoma became a state in 1907. They did not have crock pots, boxes of Jiffy cornbread, plastic containers, or mikes. In the title song, the lyrics state “Brand new state, Brand new state, gonna treat you great!”. As I entered the theatre, I was confused as to the era due to Laura Jellinek’s set design. Could I be in a warped timeline? I can buy that.

As the charming cowboy, Curly McLain (Damon Duanno), sings with guitar in hand, I appreciated the stripped-down orchestrations by Daniel Kluger. Duanno almost immediately wins us over with his heart-on-his-sleeve approach. He has an organic appeal.

The seven-piece bluegrass string band plays Richard Rodgers’ iconic score with a country twang, which is a new way of hearing this, but it works.

As Aunt Eller (Mary Testa) and her niece, Laurey Williams (Rebecca Naomi Jones), enter, suddenly musicality goes out the window. I am a huge fan of Ms. Testa, but she has been directed to sing this lyrical score stridently and it does not work, especially later on in “Out of My Dreams”. She still has that same fabulous deadpan approach, which makes her right for the role. Ms. Naomi Jones seriously cannot sing this score. I have seen her in other productions, and she can sing, so what happened? I blame both mishaps on the musical director, Nathan Koci. Mr. Fish has also directed Ms. Naomi Jones as incredibly sulky; she is almost disengaged with quiet indifference. Thankfully, when she interacts with Curley there is a wonderful longing that comes out. Her interactions with Jud just seem to push the boundaries.

As the comedic relief, Ado Annie Carnes (Ali Stroker), whose “Can’t Say No” is a delight. She makes us see the woman in the prime of knowing her control on men. Her interaction with the Persian salesman, Ali Hakam (Will Brill), and cowboy Will Parker (James Davis) are all believable and sexy. All three of these characters sing well. I especially appreciated the song “It’s a Scandal! It’s a Outrage!” being added back in. Mr. Brill is definitely a find with his impeccable timing. Mr. Davis makes us get his longing for Ado Annie, but his big dance number, “Kansas City”, is reduced to clumsy jumping around on tables.

The scene between Curley and Jud is done in the dark, in semi-monotone voices, until a videographer shines Jud’s face up on the screen. The last motif leads us to think the reason these two men fight is possibly because they long for each other.

Lighting director Scott Zielinski has done some rather cool things with the lighting. I loved the green haze for when we are in the actor’s heads.

Then there is the ballet. Gabrielle Hamilton is a strong, beautiful modern dancer and if she were in a modern dance performance, I could understand John Higinbotham’s choreography, but this piece is way too long and when compared to Agnus De Mille, this ballet seems more like a nightmare.

In watching this show, I was reminded of David Cromer’s Our Townand thought if you were going to update this, why not do everything modern and then in the ballet, show us the past and really get into the issues of political incorrectness?

What the most confusing part is, is the ending. What I think was supposed to shine a light on white male privilege and gun violence fails for several reasons. Jud is white, he has tried to kill Curley more than once and has threatened Laurey with what seems like a death threat. He was never invited to the wedding yet shows up and gives Curley, who sold his horse and his gun, another gun. Then he steps towards him and Curley shoots him. Somehow, we are supposed to feel sorry for him. Do you feel sorry when a killer or a sociopath is killed? In the original piece, it is alluded that Jud burnt down and killed the girl at the last place he worked at. If this was said during this version, I missed that. In leaving the theatre, the only thing audiences were talking about was how did that much blood get on our two stars.

There were a handful of audience members who left at intermission, but hey, they did that after the first killing in Sweeny Todd. I will say I did love the complimentary chili and cornbread.

Oklahoma!: Circle In the Square, 1633 Broadway

Suzanna BowlingJanuary 22, 2023
Read More
Scroll for more
Tap
Meet The Cast and Creatives of The Prom With Richard Ridge
Get to Know the Cast of Kiss Me Kate