Old Stock: A Refugee Love Story, by Hannah Moscovitch, Ben Caplan, and Christian Barry at 59E59 Theaters is a little like a Kurt Weill cabaret. The show is narrated by The Wanderer (Ben Caplan), whose long hair and attire of purple hat and coat are reminiscent of “Mr. Dark” from Something Wicked This Way Comes. Poking his head out of the top of the container that serves as a set, he lures us along with his musical troupe. Louise Adamson and Christian Barry – the marvelous set designers – also created the moody atmospheric lighting, which dominates this piece. 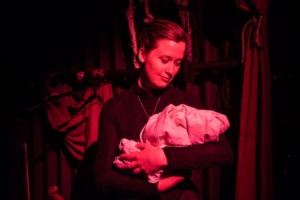 It begins in 1908, as we are told the tale of two Romanian-Jewish immigrants, Chaya (Mary Fay Coady) and Chaim (Chris Weatherstone), who meet while standing in line at a Halifax immigrant station. Chaim is younger – 20 – and falls immediately in love with Chaya – 24 – who is still hanging onto the memories of her husband who died in Russia en route to safety. Chaim was away and returned to find his family, save for his father, had been annihilated in a pogrom. His father, who could not take the grief, killed himself. We watch as the stages of life change Chaya and Chaim, and how unconditional love heals and brings about a happy ending. 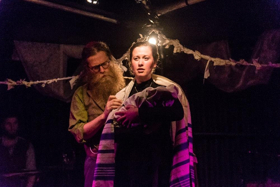 On the other side of this show are the songs, which are klezmer infused with hints of bluegrass, but seem separate from the story. Many are laced with euphemisms for copulation. Or they border on commentaries trying to connect now to then, which doesn’t work. The music, however, is well played by Graham Scott on keyboard and accordion, Jamie Kronick on percussion, with Ms. Coady on violin and Mr. Weatherstone on woodwinds. 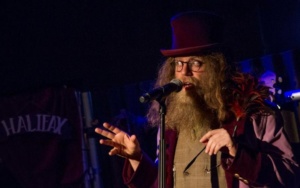 This is one talented cast. Caplan is a little bit like Rabbi Shlomo Carlebach, whose daughter, Neshama, I almost brought as my guest. Mr. Caplan needs to work on his diction because his dialogue and most of his lyrics seem muffled and hard to understand. Mary Fay Coady and Chris Weatherstone are so believable that we follow their story and give a sigh of relief when things turn around. They make this tale touching and relevant. The story is taken from Moscovitch’s family tree and her great-grandparents.

Christian Barry directs this piece with flourish. Created by the Halifax-based 2B Theatre Company, hopefully, this piece will shed just a little bit more light and open some hearts.

Genevieve Rafter KeddySeptember 14, 2022
Read More
Scroll for more
Tap
He Says: Amy and the Orphans A Salute to the Real Aunt Amy and to the Play’s Star, Jamie Brewer
Donell James Foreman of The Book of Mormon Sings Whitney