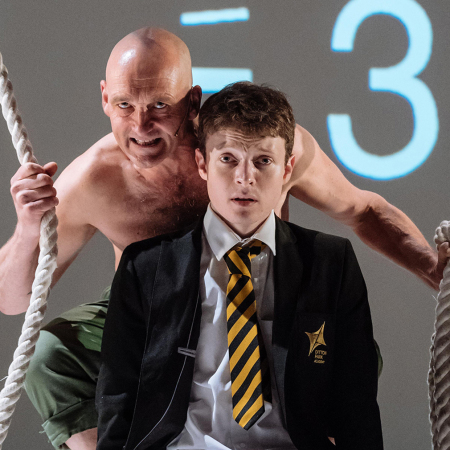 “Stories are more important if they carry the truth“, we are told, now, more than ever, the truth is the key. Wrapped tightly up in the rough fiber of these harsh ropes, an epic theatrical event streams out viscerally for us all on the Old Vic Theatre YouTube channel.  It’s a complicated time in history, but the power of theatre still remains as valuable as ever. It gives meaning and life, and a sense of purpose, growing even more strong during these troubling times. Swirling and colliding in story-time contradictions, A Monster Calls, as directed most beautifully by the excellent Sally Cookson (NT’s Jane Eyre), finds its moral and magical core carved most creatively in every nook and cranny in the trunk of that big Yew tree’s bark. Devised by the original company with writer Adam Peck in the room, the ropes twist and knot with an exhilarating inventiveness, marking the aching humanity of our time on this planet with a systematic cohesiveness that is a marvel to witness and devour.

“Look, see that tree Connor, it’s a Yew tree. you and I will never be as old as that tree. It is ancient.”

Based on the prize-winning children’s novel by Patrick Ness and inspired by an idea from Siobhan Dowd, the Old Vic production tangles up the mythology of death, disease, and adolescent reality with a fairytale storybook structure played out on a bare white stage. With coarse ropes hanging down and tied back like curtains at a picture window, Connor, played instinctively by the wonderful Matthew Tennyson (Donmar’s Making Noise Quietly), breathes out his anguish, watched from all sides by a chorus of anxiously waiting characters looking for their moment to dive in. He’s isolated and alone, even when surrounded, trying to survive the flashes of red that threaten him with static energy nightly, screaming himself awake with the frightened and intense, “Go Away“. Played with a gentle engaging edge that echos the wonderful staged magnificence of Curious Incident of the Dog in the Night-Time, the flashing of strobes and the determined movement of the chairs and the cast deliver the story of confusion and heartbreak of a broken son, with bullies in every corner, dealing with a disease that is attacking his mother from within, and no salvation in sight.

He resists, as any lonely young teen boy would do, to any attempt of adult authority, specifically his rigid disciplinarian grandmother, played strongly by the wondrous Selina Cadell (Donmar’s Twelfth Night). But Connor is powerless to the dream monster who flies in from the tangle of roped Yew tree branches in his backyard. It’s a magically disturbing visual, crafted with effortless grace by designer Michael Vale, giving us a paternal mythical force etched in fear but encrusted with a guiding hand of abstract hope and metaphor. The folkloric creature, bare-chested and powerfully embodied by Stuart Goodwin (West End’s La Strada), visits the tortured boy nightly, commanding with a complex authority that he must listen to three tall tales told, that will, in the end, lead to a fourth that must be told by Connor and found hidden within the truth. Or the monster will “eat you alive.” It’s fable and fantasy wrapped up in twisted tales told by the wildest of all things. There are “worse things to be frightened of“, we are told, and “when you let them loose, who knows what havoc they might wreak?’” They are fairytales that are not dipped in the obvious structure of plot and symbolism but wrapped and tied up in chaos and uncertainty. Connor tries to construct a life lesson out of them, but life is not a fairytale, and it follows no standardized plot.

The rope twists and encapsulates the telling, beautifully creating a symbolic world of depth, simplicity, and emotional vulnerability. Cookson has a knack for creating magic out of the most basic of elements, using chairs to show disordered chaos, the actors’ bodies as earthly tools, and long strands of rope as the steering wheel forward through tragic circumstances.  In Connor’s detested grandmother’s care, anger against the uncontrollable flies out with a force, sandwiched almost violently between being loved unwaveringly by a stoic mother, lovingly portrayed by Marianne Oldham (BBC’s “The Crimson Field“), and a far-away father, played dynamically by Felix Hayes (NT’s Peter Pan) who tries to be there for his “buddy” but is dishearteningly called away by a different disease in a different family. Tennyson finds physical vulnerability within the victimized Connor, particularly with these familial relations, creating a solid structured solitude in the trunk of his angry tree. His eyes rarely register with those close at hand, even when saved by the caring Lily, gloriously portrayed by Witney White, or pestered by the intricate John Leader as the classroom bully. But a manic, forceful energy is somehow found, sparked under the tutorage of the monster that slays the dragons within the ‘rubbish‘ fairy tales told. There are no outright bad guys here when A Monster Calls, only a mixture of guilt and love towards his ailing mother, not in a half belief of all healing, whether seen or not seen, just the truth and (rightly) not the truth at all.

There is nothing formulaic within the monster’s tales, nor in Cookson’s expert telling of A Monster Calls. It pieces the parts together as tightly as an abstract knot made of rope and bark, sometimes with an obviously slanted step, but mostly with the balance and artful craft of an expertly made modern treehouse. The monster comes swinging in with a captivating strength in order to “get” Connor, but delivers something more unique and unfathomable. He gives him (and us) hauntingly good music up in that corner square to grab hold of but more than that, he finds his most human wish, and just in the knick of time. It’s glorious and emotional, worthy of a few streamed hours in front of the television or computer screen. With more delicious “sadness than he can bear alone“, A Monster Calls gives us care and emotional clarity, something in desperate need during this maddening complex times. And a good cry. So why wait, watch it here as it’s only available online until June 11th.

And don’t forget to donate to The Old Vic or a theatre company near you that you love. They need all the help we can give them, especially now, as we peer out the Endgame window like Radcliffe’s Clov, wondering if it is safe to go outside once again.

Jeffery Lyle SegalJuly 25, 2022
Read More
Scroll for more
Tap
“Finishing The Hat” by Stephen Sondheim
When Campaign’s Made Us Remember To Love NY