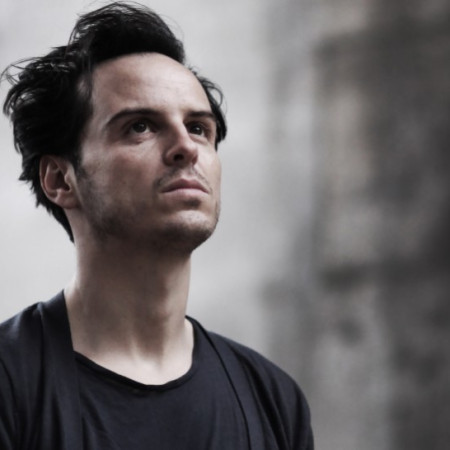 “You can’t love what disappoints you,” he says, reflecting back on a moment from father to son, and when that person is the magnificently gifted Andrew Scott (Veracity Digital’s Sea Wall, the Film), we are enthralled from the first sound of his voice. As the second production from Old Vic’s In Camera series, Three Kings finds its strong impact in the mercy it asks for a father and son, when it comes to a generational legacy dripping in the faithless making of promises broken. As written with great care and a sense of devastatingly detailed dynamics by Stephen Beresford (The Last of the Haussmans, “Pride”), the beautiful structuring of the three engagements of Patricks registers as both ultimately touching and moving, a strangely rich twisting of the rules of the Three Kings game.

Just like director Matthew Warchus did with Old Vic: In Camera‘s early production, Lungs, this one man’s journey plays out the complications of attachment in an increasing number of multi-angled panels. It is a heartbreaking puzzle much like the rules of the three coins that carries the weight of a father’s love, a bark that indicates humor and a strategy for balancing belief insecurely on an intricate movement of the mind. The Three Kings is a sharp, impossibly chic cafe trick and a test for the bars and the three Patricks that is both simple and divine. It challenges the heart to look down into the depths of the charming, un-attached relationships of blood and relations. Patrick starts out as an eight years old clinging to the moment when his absent father returns unexpectedly. In that brief but memorable encounter, the rules of engagement are set before him with the challenge of ‘The Three Kings’ that first feels like warmth, but only until the true value of the exercise is revealed. “You don’t think I’d be wasting my time on a mental defective“, the father asks, and Patrick laughs, pretending to enjoy the joke while the seed of emotional detachment and lies are sowed and planted deep inside his soul. The contempt pushed forward and the familial betrayal of all things that matter within cuts like a knife neatly applied with a surprisingly defeating fatherly grin. The parlor room intelligence test carries with it a tortured prize that dangles before him, striking hard at the core of connectivity. Years later, twice separated, the meetings and revelations of the event’s of his father’s life, corrupted in disappointments and audacious self delusion, are achingly released, first to a basically good man who loves his family, and then to another who has no need to impress, but like himself, struggles to hold true.

Andrew Scott has a way of engaging, telling a story, that is clear, honest, simple, and all things specific, becoming in a flash of brilliance his father, his Patrick, and all the others that leaves us enraptured and devastated. It’s a tryptic dissection of tortured familial detachment, etched out with supreme skill by an achingly great team of artists in a production that resonates beyond the empty auditorium.  Three Kings is expertly filled with authentic storytelling, that is a boast and an apology, as well as all things in between. It’s about the tangled web that ensnares fathers and their sons, and the complications that are passed down through inheritance within the corruptions of engagement. Scott and crew shows us exactly how it’s done with finesse and expertise, showcasing the gifts and burdens of human relationships and the pain that they can illicit, never failing us, or giving us a chance to separate from the heart and soul of this stellar production.

The world premiere of Three Kings, a brand new play byStephen Beresford written for Andrew Scott, has been created especially for OLD VIC: IN CAMERA, available to watch around the world via Zoom.. This scratch performance was streamed live directly from the iconic Old Vic stage with the empty auditorium as a backdrop for five performances only.