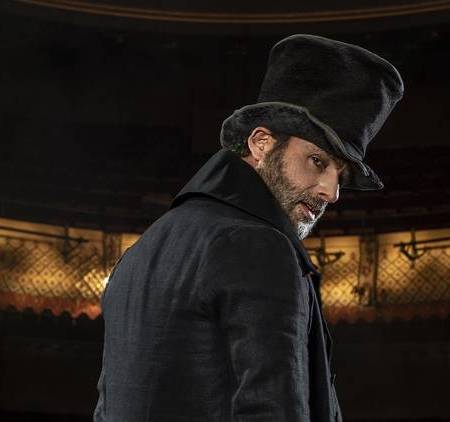 And so it begins. One more production of A Christmas Carol to stream on a cold holiday season night (well, mid afternoon, as I’m watching is it is being performed live at 730pm London, UK time, which is 230pm in this other London in Ontario, Canada). The live production is being spirited in direct from the iconic Old Vic stage as “A Ghost Story“, we are told, and with the bells ringing, this immortal classic rises up quite solidly to the task. It is as layered and emotionally connected as it should be. Matthew Warchus’ smash hit production, streaming into homes across the world until December 24th, is completely thrilling, big-hearted, and totally engaging, layered with Christmas carols sung to perfection by a band of energetic characters lighting the way through this well known story. “You dismay me“, Scrooge says with absolute disgust, but this production happily does quite the opposite.

So let the bells chime and the lanterns be lit. They hang all about the auditorium, bringing warmth and joy to the otherwise empty space. It is Christmas time after all, and even though all theatres are close, this production sings vibrantly, just as I remember it did when I saw it last year on old Broadway. This ghost story of Christmas cheer remains a well orchestrated reminder to love and celebrate this time of year with as much power and energy as you can muster. As adapted most inventively for the stage by Jack Thorne (ATC’s Sunday), this revival hits its holiday stride almost better than when I saw it before at the Lyceum Theatre. It gifts us all with a new incantation to the theatrical secrets hidden in the simplicity of its staging by the wonderful director Matthew Warchus (Broadway’s Groundhog Day) who guides the piece forward through a night of three visitations with casual cheer and emotional truths. It’s a charming iconic tale created to remind us of the joy in giving rather than receiving, and to step back from the consumerism of the holiday for the sake of our soul. It exists to reframe our holiday celebrations to be more thankful for the blessings that we have at our fingertips, if we are wide awake enough to look.

Beautifully emboding Ebenezer Scrooge, the miser at the middle of this tale of haunting, the utterly charismatic Andrew Lincoln (“Love, Actually“, National Theatre’s Blue/Orange) finds a true depth and meaning in the transformation, pulling us through his invasion and enlightenment. He oddly isn’t given a bed or a chair to sit or lay down on as the esthetic is bare and minimal, but it elevates the idea of Scrooge living without thought or lover for others, as he stands and yells his plea, “I am a great man“. in the middle of the doorframe centerstage, Lincoln takes us on his journey, with power and authenticity, shaping his surrender as fear of being vulnerable to life vibrates outward. We feel the love he spurned most wholly, and with well formulated set and costumes designed by Rob Howell (Royal Court/Broadway’s The Ferryman), lighting gracefully orchestrated by Hugh Vanstone (Broadway’s The Height of the Storm) and broadcast sound and video delicately designed by Simon Baker (OldVic/Public/Broadway’s Girl From the North Country), the story, lit by what feels like thousands of lanterns hanging overhead, is stripped down to the minimum. In that sparseness, there is engagement, beauty, and charm, especially in the visions set forth before us.

These ghostly shadows, layered sometimes distractingly on top of one another, shares life with us all. Brought forward by the phenomenal Julie Jupp (Old Vic’s The American Clock) as the Ghost of Christmas Past, and the strong Golda Rosheuvel (West End’s The Curious Incident…) as the Ghost of Christmas Present, the process is both engaging and solidly emotional. Somewhere in the sisterly Future, the inventiveness finds its footing even stronger than the Broadway staging, especially in the hands of both Melissa Allan (Young Vic’s Twelfth Night) as Little Fan, and Gloria Obianyo (Olc Vic’s Fanny & Alexander) as Belle. The two add layers of humanity that vibrates as delicately and honestly as the emotional web sewn through the psychology of being raised by a cruel bully of a father, well played by Michael Rouse (West End’s Romeo and Juliet) and the life he was given. With profound sentiment, we also feel the heartstrings being pulled by the gorgeously crafted Tiny Tim, the crippled son of his unlucky clerk (played by a revolving group of four young actors), who helps fill Scrooge’s heart with a desire to be a better man to others and to himself.

It doesn’t hurt that the production is also filled with the singing of some of the most cherished Christmas carols around, thanks to composer/arranger Christopher Nightingale (West End/Broadway’s Matilda). His joyful choral arrangements traditional music, sung well and strong by the super-talented cast give the feast that is flown in its holiday joy. The meaning of Christmas isn’t lost on Ebenezer, the mighty invader, nor is it lost on any of us. Seized by the productions utter happiness, the tale of redemption, brimming with Christmas spirit, is why life and theatre is such a thrill. The streamed production is by no means perfect, nor is it without holes and twists that might make Charles Dickens squirm in his seat, but the charity and love that exists within the home of The Old Vic is a much needed commodity these days. It’s a tale we all love to invite in and have in our home, as this version of A Christmas Carol is musically overflowing with goodness, warmth, a turkey as big as three heads, and tons of beautiful fake snow falling all around the newly enlightened Scrooge. What could be more Christmasy than that?

A Christmas Carol is being performed and streamed live as part of our Old Vic: In Camera series. Here’s hoping that you join with them to support the series and get excited to be part of a live theatre community once again. They need your help in making sure that The Old Vic and their wildly inventive productions are still here to enjoy once our much-missed normal lives resume. Book your tickets here, before it’s too late to raise a glass of cheer to Christmas, The Old Vic, and everyone who is involved in this glorious production.

Suzanna BowlingJanuary 24, 2023
Read More
Scroll for more
Tap
What To Watch December 18th To Take Away The Blues
T2C Talks to James Rocco To Learn More About A Country Christmas Carol “On Air”