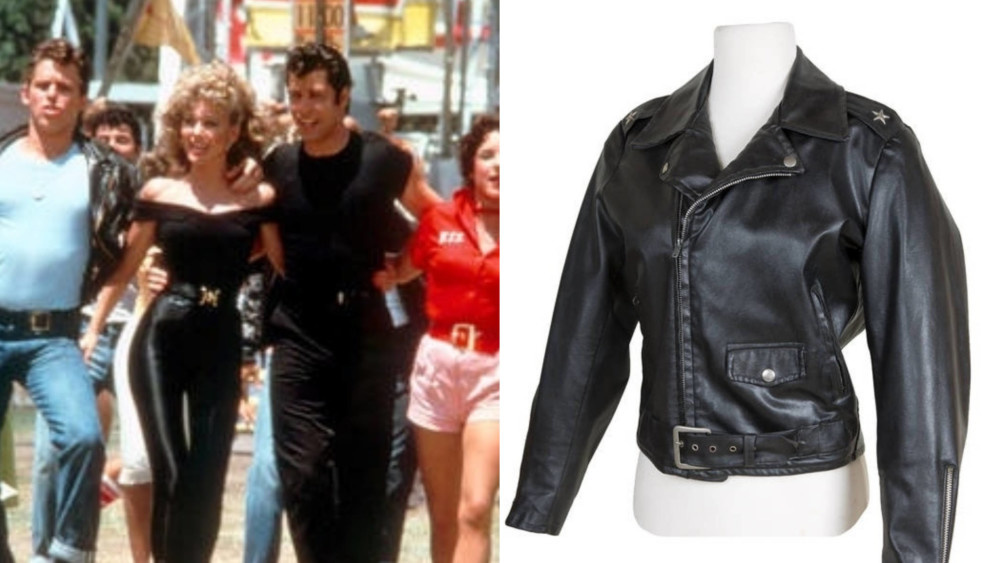 Julien’s Auctions, the world-record breaking auction house, honors one of the most celebrated and beloved pop culture icons of all time with their PROPERTY FROM THE COLLECTION OF OLIVIA NEWTON-JOHN (OBE, AC, HONORARY DOCTORATE OF LETTERS (LA TROBE UNIVERSITY)) auction event live at The Standard Oil Building in Beverly Hills and online atjuliensauctions.com. Over 200 of the most iconic film and television worn costumes, ensembles, gowns, personal items and accessories owned and used by the four-time Grammy award-winning singer/Hollywood film star and one of the best-selling musical artists of all time who has sold 100 million records worldwide, will take the auction stage headlining Julien’s Auctions’ ICONS & IDOLS two-day music extravaganza taking place Friday, November 1 and Saturday, November 2, 2019.

The Cambridge, England born and Melbourne, Australia raised singer and actress began her music career at the age of 14, when she formed an all-girl group, Sol Four, with her friends. She became a regular on Australian radio and television shows where she performed as “Lovely Livvy” and toured nightclubs in Britain and across Europe with Pat Carroll (now Pat Farrar) as the duo “Pat and Olivia.” Newton-John was also a regular on “The Cliff Richard Show.” Newton-John recorded her first single, “Till You Say You’ll Be Mine,” in 1966 and recorded her first solo album in country music, If Not For You, in 1971. Her first hit single, “Let Me Be There,” in 1973 charted the American Top 10 on the Pop, Country and Adult Contemporary lists and she earned her first of four Grammys for “Best Country Female” and an Academy of Country Music award for “Most Promising Female Vocalist.” Newton-John had another hit with the release of If You Love Me, Let Me Know, with the title track reaching No. 5 on the Pop, No. 2 on the Country and No. 2 on the Adult Contemporary charts. Newton-John became a household name with the release of her next single in 1974, her first No. 1 Pop single and signature anthem, “I Honestly Love You.” Newton-John won two Grammys for “Record of the Year” and “Best Pop Vocal Performance-Female” that year and the album reached No. 1 on both the Pop and Country Albums charts. Newton-John became one of the first artists to successfully cross over and topped both the Pop and Country Albums charts again with her next album, Have You Never Been Mellow, and dominated in the mid-70s with numerous No. 1 singles and hits including “I Honestly Love You,” “Have You Never Been Mellow,” “Please Mr. Please,” “Something Better to Do,” “Let it Shine/He Ain’t Heavy, He’s My Brother,” “Come on Over,” and “Don’t Stop Believin’.”

In 1978, Newton-John would become not just an international movie star but a pop culture icon when she co-starred opposite John Travolta in the high school musical film, Grease (Paramount, 1978). Set in the 1950s, Newton-John played Sandy Olson, a virtuous and demure Australian high school senior and Travolta played Danny Zuko, a tough but tender greaser.Grease became a blockbuster smash and one of the most successful movie musicals of all time. The soundtrack would become one of the top best-selling soundtracks, spending 12 weeks at No. 1, producing three Top 5 singles for Newton-John with the platinum and No. 1 hit single “You’re the One That I Want” with Travolta, the gold “Hopelessly Devoted to You,” and the gold duet “Summer Nights” with Travolta. Newton-John earned a Golden Globe nomination as “Best Actress in a Musical” and performed the Oscar-nominated “Hopelessly Devoted to You” at the 1979 Academy Awards.

Newton-John’s music and image transformed as a provocative pop diva with the 1978 release of her Top 10 album, Totally Hot, which produced the Top 10 singles, “A Little More Love” and “Deeper Than the Night.” In her next film, the cult classic musical Xanadu (Universal, 1980), she co-starred with the legendary Gene Kelly, which produced another successful soundtrack that went double platinum and produced three hit singles for Newton-John, her No. 1 Pop hit single “Magic,” “Suddenly” with Cliff Richard and the title track with the Electric Light Orchestra. In 1981, Newton-John released her most successful studio album, the double platinum Physical. The monster title track set the record for the most weeks spent at No. 1 and ranked as the biggest song of the 1980s. She broke ground by being the first artist to record a video album for Physical, featuring videos of the album’s tracks which earned her fourth Grammy award and continued to dominate in the decade with some of her greatest hits including “Heart Attack,” “Make a Move on Me,” “Landslide” and “Twist of Fate.”

Her illustrious music career has spawned five number-one and ten other Top Ten Billboard Hot 100 singles with eleven of her singles and 14 of her albums (including two platinum and four double platinum) certified gold by the RIAA. The 2019 release of her memoir, “Don’t Stop Believin’” garnered another accolade for Olivia – the title of NY Times Best-Selling author.

After being diagnosed with breast cancer in 1992, Newton-John has been a staunch advocate for health awareness which inspired her to help create and become the Founding Champion of the Olivia Newton-John Cancer Wellness & Research Centre in her hometown of Melbourne, Australia. A portion of the auction proceeds will go towards the ONJ Cancer Centre, a cutting edge facility that provides a comprehensive range of services for cancer treatment, education, training and research including a wellness centre to support the mind, body and spirit (ONJCancerCentre.org). The strategic co-location of research laboratories and research-training within a clinical environment enables clinicians and researchers to work together to integrate clinical medicine with basic and translational cancer research for the ultimate benefit of cancer patients.

In 2005, along with her business partners Gregg Cave, Warwick Evans and Ruth Kalnin, Olivia opened Gaia Retreat & Spa in Byron Bay, New South Wales, Australia, as an ideal place to renew, refresh and restore. Gaia has received numerous awards since it opened including the Conde Nast Traveller Readers’ Spa Award Winner for the Favourite Overseas Hotel Spa: Australasia & South Pacific; Best Health Retreat award at the Gourmet Traveller Travel Awards, as well as TripAdvisor’s Traveller’s Choice Award for Best Relaxation/Spa Hotels in South Pacific; and the World Travel Award for Australia’s Leading Spa Resort and Australia’s Leading Boutique Hotel, among many others. TripAdvisor named Gaia #3 of the “Top 10 Celebrity-Owned Hotels in the World,” putting Newton-John in the company of fellow hotel owners, Robert Redford, Bono and Robert De Niro. Gaia’s award-winning Day Spa is “home” to some of Australia’s best healers and therapists, with leading wellness consultants, yoga instructors and fitness coaches available to meet the guests every need. Add to this Gaia’s highly acclaimed world class spa cuisine, which has received numerous awards, including, most recently, the 2018 World Luxury Restaurant Award for Best Health & Wellness Cuisine (Global Winner). In February 2019, Newton-John released the skincare range, Retreatment Botanics, inspired by the heart of Gaia Retreat & Spa. The natural, luxury formulas are Australian made, vegan, certified palm oil free by the Orangutan Alliance and contain powerful native extracts. “We created a range you can take home and enjoy a Gaia Retreatment any time,” says Newton-John.

One of the highly anticipated moments of the auction will be the sale of one of film’s most iconic costumes – Newton-John’s black leather jacket and skin tight pants (estimate: $100,000-$200,000) from Grease (Paramount, 1978). In the film’s finale number of “You’re the One that I Want,” Sandy (Newton-John) surprises Danny (John Travolta) with her transformation as a demure cheerleader to a sexy greaser girl. The black leather jacket and pair of figure hugging black shiny high waisted pants that were so tight that Newton-John had to be sewn into them will rock the auction stage. Other items from Grease include Newton-John’s original script from the film (estimate: $2,000-$4,000); a Grease ten times platinum award (estimate: $1,000-$2,000); her custom made 1950s inspired petal pink point d’esprit lace gown worn to the 1978 premiere of Grease at The Mann’s Chinese Theatre in Los Angeles (estimate: $3,000-$5,000); a custom “Pink Ladies” jacket presented to Newton-John by the cast and crew of Grease(estimate: $2,000-$4,000) and more.

Two of her “Physical” wardrobe pieces make an appearance consisting of a white ribbed velvet and gold lamé long top and a pair of short shorts worn by the singer on the October 2, 1981 episode of The Merv Griffin Show(NBC, 1962-1986) (estimate: $1,000-$2,000) and her custom made silk satin bodice worn on the cover of the 1982 “Physical” tour book (estimate: $1,000-$2,000). Costume items from her cult-classic film, Xanadu, are featured including her custom-made cream thigh high suede western boots (estimate: $2,000-$4,000) and a pair of Missoni colorful knit harem pants embellished with gold tone bugle beads worn by Newton-John while singing the title song in the film. Other highlights include her custom made silk beaded chiffon gown and spandex cat suit worn at the 50th Annual Academy Awards in 1978; a white chiffon gown worn by Newton-John while performing a medley of songs with Andy Gibb and ABBA on her ABC 1978 television special, Olivia; her 1978 “Totally Hot World Tour” pink chiffon bodice; her custom denim bell bottom jeans worn on her 1975 appearance on The Midnight Special (NBC, 1972-1981) and more.

“Julien’s Auctions is honored to present this auction event celebrating one of pop music’s greatest talents and treasured icons, Olivia Newton-John,” said Martin Nolan, Executive Director of Julien’s Auctions. “Her extraordinary career – that includes her starring role in Grease, one of the most successful Hollywood films and soundtracks of all time – and her recordings of some of the biggest pop singles of the 20th Century, makes her more than just a star but a pop culture phenomenon.”Special exhibitions in Europe and the U.S. for the public to view highlighted items prior to the auction will be held at The Museum of Style Icons in Newbridge, Ireland (dates to be announced) and The Standard Oil in Beverly Hills October 28th-November 1st.