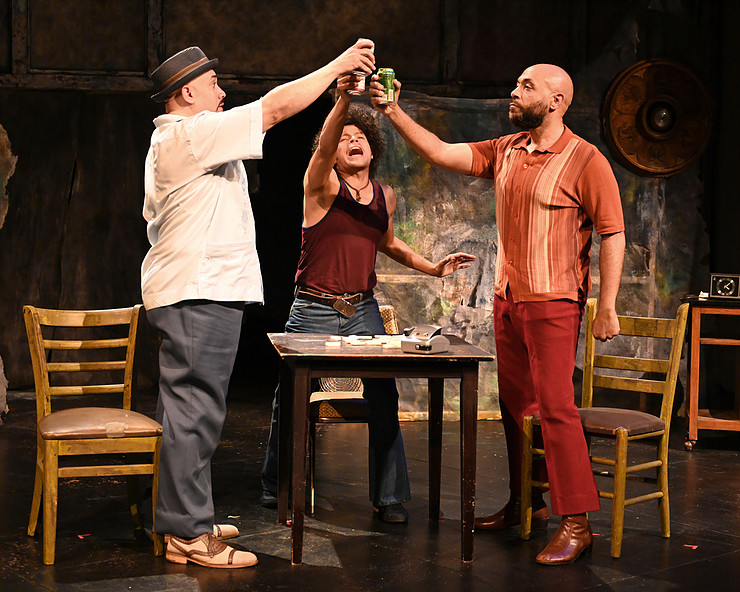 MultiStages, the multicultural, multidisciplinary theatre company under the artistic direction of Lorca Peress, held their world premiere of Desi Moreno-Penson’s Ominous Men, at the 14th Street Y. This new dark play about race, poverty, drugs, misogyny and violence in America, is told through a gothic horror and magic realism lens. The production directed by Ms. Peress continues its run through Sunday, November 3rd at The Theater at the 14th Street Y, 344 East 14th Street in Manhattan.

So that’s blurb. Here’s the skinny. Amazing! See it before it disappears like a ghost in the night.

Three men are confronted by their ferocious pasts in the derelict Bronx Concourse Plaza Hotel basement on July 13, 1977: Butch (Johnny Rivera), the Nuyorican caretaker has been digging a pit looking for buried treasure with his nervous cousin Goyo (Gus Scharr), and Butch’s drug sponsor and ex-Black Panther Yancy (Russell Jordan). This night of drinking, camaraderie and bones (dominoes) turns violent when the blackout hits. When a stranger (Renoly Santiago) climbs out of the pit, and the ghost of a Holocaust survivor (Howard Pinshasik) and murdered woman (Gabrielle Lee) appear, all hell breaks loose.

Once you have been drawn in to this basement, of this cavernous, historic, old and spooky space, seeing and more importantly believing that ghost do exist is not hard as the ghosts appear and disappear in such incredible fashion.

Renoly Santiago shines as the first ghost to climb out of the hole in the floor. The actors display such an amazing range of emotion and physicality. This ghost acts as a mentor of sorts to the the three bones playing characters and the other two ghost. Mr. Santiago’s performance was simply a wonderful spectacle to behold.

Ms. Peress keeps this show moving in a direction you hadn’t thought of. Desi Moreno-Penson characters, could use more flushing out.

The scenic design by Jennifer Varbalow recreates the basement of a dilapidated and abandon hotel that was once grand and glamorous. Along with the projection designer Jan Hartley; lighting design by Kia Rogers and costumes by Lisa Renee Jordan, they accurately recreated not only the place, but the time as well, New York City, summer of 77. The sound design by Sun Hee Kil captures the heartbeat of time at hand.

This play is wroth the trip, as it is intimate, deep, thought provoking, and frightening all at the same time. A roller coaster of emotions tied together. Ominous Men is perfectly timed and well told ghost story.