On-Stage Seating for Farinelli And The King Go On Sale November 1 at 10:00 AM

On-Stage Seating for Farinelli And The King Go On Sale November 1 at 10:00 AM 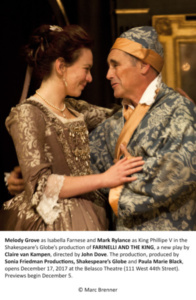 On-stage seating for the Shakespeare’s Globe production of Farinelli And The King, starring three-time Tony Award winner and Academy Award winner Mark Rylance, will go on sale on Wednesday, November 1, 2017 at 10:00 AM. The Belasco Theatre will be transformed for this beguiling and transporting production, lit almost exclusively by the glow of candlelight and with live music played on Baroque instruments. Theatregoers who choose on-stage seats, in the upper gallery and at stage level ($32-$157) will have an authentic, up close and intimate viewing experience. These tickets will be available for purchase at Telecharge.com and at the Belasco Theatre box office (111 West 44th Street). 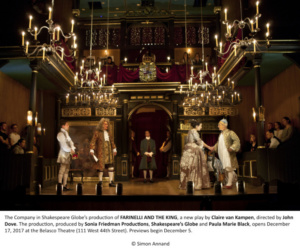 The front two rows of the Belasco Theatre will be replaced with banquette seating for this production, and these seats will also go on sale on Wednesday, November 1 2017 at 10:00 AM. The cushioned banquettes will be in the style of Shakespeare’s Globe’s indoor Sam Wanamaker Playhouse, a recreation of a Jacobean-era theatre, where Farinelli And The King originally premiered in 2015. 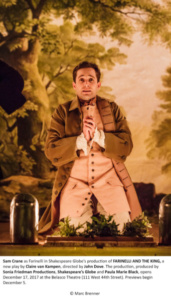 Produced by Sonia Friedman, Shakespeare’s Globe and Paula Marie Black, Farinelli And The King is a new play by Claire van Kampen, directed by John Dove, designed by Jonathan Fensom, with musical arrangements also by Claire van Kampen. The critically acclaimed production begins previews December 5, 2017 in advance of an opening night on Sunday, December 17, 2017 at the Belasco Theatre. Farinelli And The King plays a strictly limited engagement for 16 weeks only through Sunday, March 25, 2018.

Over 200 seats at every performance have been set aside to be sold for $32. These tickets, bookable in advance, include seating on all levels of the theatre, as well as a selection of seats on stage. As part of the producers’ commitment to accessible tickets, over 25,000 $32 seats will be made available throughout the run. 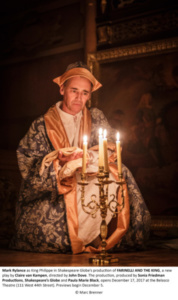 King Philippe V of Spain (Mark Rylance), plagued by insomnia, lies awake in his chamber. The Queen, desperate for a cure, hears of Farinelli – a castrato with a voice so divine it has the power to captivate all who hear it. Philippe is astonished when Farinelli sings, and begs him to stay. But will Farinelli, one of the greatest celebrities of his time, choose a life of solitude over fame and fortune in the opera houses of Europe? 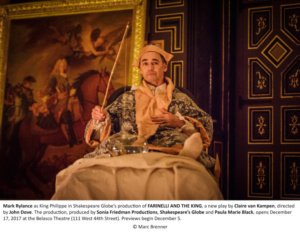 Mark Rylance returns to the Belasco, where he triumphed in 2013 with the Globe’s Twelfth Night and Richard III double bill. He won his third Tony Award for his performance as Olivia in Twelfth Night and was also Tony nominated for his performance in the title role of Richard III. Farinelli And The King is Mark Rylance’s first return to Broadway since he won the 2015 Academy Award for Best Performance by an Actor in a Supporting Role for Steven Spielberg’s Bridge of Spies, and after his critically acclaimed performance in Christopher Nolan’s Dunkirk. 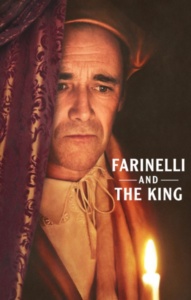 Grammy Award-winning countertenor Iestyn Davies also stars as the singing voice of Farinelli, performing many of the exquisite Handel arias first sung by the real-life Farinelli in the 1730s. Acclaimed countertenor James Hall will perform the singing voice of Farinelli at select performances. The schedule for Mr. Davies and Mr. Hall’s performances is available on the ticketing page of the Farinelli And The King website. Eric Jurenas will cover the role.

Farinelli And The King premiered to rave reviews and played a sold out run at Shakespeare’s Globe’s Sam Wanamaker Playhouse in February 2015. The production later played a sold out engagement on the West End in Fall 2015, where it was the highest grossing show in the history of the Duke of York’s Theatre, and received six Olivier Award nominations. FARINELLI AND THE KING marks the seventh theatre production that Sonia Friedman Productions has produced starring Mark Rylance, following Twelfth Night, Richard III, Jerusalem, La Bête, Boeing-Boeing (London and New York) and Nice Fish (London).

Tickets are available at Telecharge.com, or at the Belasco Theatre box office.