On the 60th Anniversary of “The Day The Music Died” Bucks County Playhouse Brings Back “Buddy: The Buddy Holly Story” 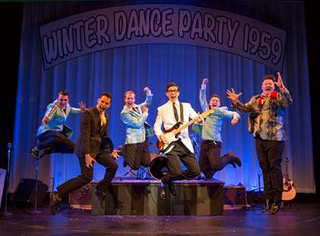 On the 60th Anniversary of “The Day The Music Died” Bucks County Playhouse Brings Back “Buddy: The Buddy Holly Story”

“Buddy” is an outstanding  production. It’s worth the trip to New Hope, PA  to see it. It’s filled with high energy and a multi-talented cast that keeps you engaged for every minute. The audience had a hard time staying in their seats, because the music makes you want to jump up and dance. The shows plays through March 3rd.

Andy Christopher, who has performed the role in multiple productions across the United States including the Buddy 25th Anniversary tour,  plays Buddy Holly. This production sees the return of Brandi Chavonne Massey (Broadway’s “The Color Purple”) as Apollo Performer; Gilbert D. Sanchez (“Showgirls the Musical” Off-Broadway) as Ritchie Valens; Maximilian Sangerman (“The Lightning Thief,” First National Tour) as Tommy Allsupp; Zach Cossman (Bucks County Playhouse’s “Rocky: The Rocky Horror Show”) as Jerry Allison; Sky Seals (Johnny Cash from Bucks County Playhouse’s “Million Dollar Quartet”) and Natalie Grace Ortega as Maria Elena. Matt Cusack (Broadway’s “Bandstand”) as Joe B. Mauldin; Adam McDowell (Horton in the National Tour of “Suessical”) as The Big Bopper; Brittany Brook as Vi Petty, Ryan Halsaver as Hipockets Duncan are  all  making their Bucks County Playhouse debuts. “Audiences really embraced ‘Buddy’ in both 2016 and 2017, so we have decided to bring the production back one more time,” says producer Stephen Kocis. “February 3, 2019 commemorates the 60th anniversary of ‘The Day the Music Died’ — the plane crash that took the lives of Buddy Holly, the ‘Big Bopper’ and Ritchie Valens. So we believe there is no better time to honor the music and legacy of these great rock n’ roll legends with Hunter Foster’s energetic production of ‘Buddy’.”From his meteoric rise to fame in 1957 through his tragic death less than two years later, Buddy Holly influenced modern music like no other performer of his generation. “Buddy: The Buddy Holly Story” features more than 20 of Holly’s greatest hits, including “That’ll Be The Day,” “Peggy Sue,” “Oh Boy,” and many more. The show features a book by Alan Janes and music and lyrics by Buddy Holly. It opened in London’s West End, where it ran for over 10 years, and premiered on Broadway in 1990.William Shuler serves as musical director, Adam Koch is scenic designer with lighting design by Gina Scherr, costume design by Nicole V. Moody, and sound design by Matthew Given.  Casting by Tara Rubin Casting – Kaitlin Shaw, CSA.The production  plays the following schedule: Tuesdays at 7:30 p.m., Wednesdays at 2:00 p.m., Thursdays at 2:00 p.m. and 7:30 p.m., Fridays at 8:00 p.m., Saturdays at 2:00 p.m. and 8:00 p.m., and Sundays at 2:00 p.m. The opening performance is Sunday, February 10 at 2:00 p.m.Tickets start at $65. Special discounts are available for groups of 10 or more. The new Deck Bar and Restaurant at Bucks County Playhouse will be open before and after the show for dining and drinks. For more details, visit playhousedeck.com or call (267) 270-2989.For full details, and to purchase tickets, please visit buckscountyplayhouse.org, call 215-862-2121, or visit the box office at 70 South Main Street, New Hope, PA.

Bucks County Playhouse is a year-round, nonprofit theatre that has grown to a $6 million producing organization with an annual audience of over 73,000. Founded in 1939 in a converted 1790 gristmill, Bucks County Playhouse quickly became “the most famous summer theatre in America,” featuring a roster of American theatrical royalty including Helen Hayes, George S. Kaufman, Moss Hart, Kitty Carlisle, Angela Lansbury, Alan Alda, Tyne Daly, Bernadette Peters, and Liza Minnelli and remained in continuous operation until 2010. In 2012, the Playhouse re-opened after a multi-million-dollar restoration thanks to the efforts of the Bridge Street Foundation, the nonprofit family foundation of Kevin and Sherri Daugherty, and Broadway producer Jed Bernstein. Now open, the Playhouse just unveiled The Deck, a 4,000 square foot Delaware river view restaurant and bar expansion.In 2014, Tony Award-winning producers Alexander Fraser and Robyn Goodman took the helm of the Playhouse, and today the Playhouse has reclaimed its reputation of attracting Broadway and Hollywood artists. Its productions of “Company” starring Justin Guarini, and William Finn’s “The 25th Annual Putnam County Spelling Bee” were named by Wall Street Journal to its “Best of Theatre” list for 2015. The 2017 season included four world premieres and audiences grew by over 34%. Box office records have been repeatedly broken by signature productions of “Buddy: The Buddy Holly Story,” “Steel Magnolias” directed by Marsha Mason, and “Million Dollar Quartet,” “42nd Street,” and “Guys & Dolls” directed by Hunter Foster. The creative teams who come to create new productions at the Playhouse are among the most talented artists working in the professional theatre today and relish the opportunity to work on the historic stage where Grace Kelly, Robert Redford, and Jessica Walter began their careers. 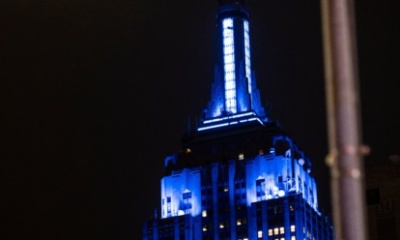