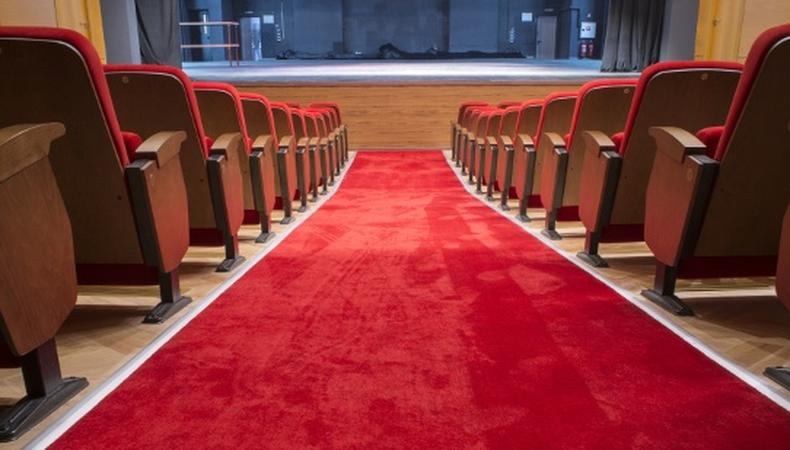 Lawrence Harbison, The Playfixer, ordinarily brings you up to date with what’s hot and what’s not in New York; but since the New York theatre is closed down for the foreseeable future, in this column Larry reports on shows you can stream on your computer or other preferred gizmo.

In Falling Stars, an actor walks into an antique shop in London and discovers a stack of old sheet music of songs from the 1920s, which inspires him to sing, joined by a snazzily-dressed woman who comes out of the shadows. I am a sucker for great old songs, and there are several of them in this revue, by the likes of Charlie Chaplin, Irving Berlin, Vincent Youmans, Buddy de Silva and several others. There is some narration between songs, including a reminder that these are songs from an era when the world had emerged from two crises: the Great War and the Spanish Flu pandemic. The performers, Peter Polycarpou and Sally Ann Triplet, are pretty good though not great. If you feel like hearing some wonderful old songs over the course of a little under an hour, click here: www.broadwayondemand.com

In Steven Carl McCasland’s Little Wars, guess who’s coming to dinner? None other than Lillian Hellman, Dorothy Parker and Agatha Christie. Guess where? The home of Gertrude Stein and Alice B. Toklas. I am unsure if Gert and Alice are still in Paris or have decamped elsewhere, sure that another World War is coming. Be that as it may, the conversation is lively but that’s all this play is – conversation. The only conflict in it is between Stein and Hellman. Stein hates her (which made me wonder, when then did she invite her?) and insists upon addressing her as “Lilly Ann.” To spice things up, Hellman has brought along a writer Stein has never heard of: Dorothy Parker. Also in the mix: a young American woman who has come to ask Stein for money to help Jews escape the Nazis, and a younger French woman, a victim of sexual abuse and a Jew as well, who Stein and Toklas have taken in and who works for them as housekeeper, maid and general factotum. They, and Agatha Christie, are the most interesting characters. Stein and Hellman are Merely Cranky and Parker, Merely Weird, with little of Dorothy Parker’s legendary caustic wit (at least as played by Debbie Chazen).

Unlike Falling Stars, this is a zoomed production (lower case, as it’s actually on a Zoom clone called Vimeo). The Biggest Name in the cast is West End star Juliet Stevenson, who is wonderfully cranky as Lillian Hellman. Catherine Russell, as Toklas, employs an artificial way of speaking which I found rather grating, a word which also may be used to describe Linda Bassett’s Gertrude Stein. She’s believably Jewish, unlike Kathy Bates’ Stein in Woody Allen’s exquisite film, “Midnight in Paris,” but Bates has all of Stein’s generosity and kindness, which Bassett lacks. For all I know, Bassett ’s portrayal is more accurate, but I much preferred Bates’. Sophie Thompson is delightfully dotty as Agatha Christie, but the two most compelling performances are by Sarah Solemani as the American Freedom fighter trying to save the Jews and Natasha Karp as the housekeeper.

Lately, the Mint Theatre Co. has been streaming productions of recent vintage, and I have reported on several of them. Their latest is Teresa Deevy’s Katie Roche. Deevy was an Irish dramatist in the 1930s whose plays were regularly done by the Abbey Theatre. Then Yeats stepped down as its Artistic Director, and the new management passed on this play, which so disappointed its author that she stopped writing stage plays and focused on radio drama. I don’t think the play was ever done in Ireland, but it was produced on Broadway in 1937, where it was considered to be a comedy, which mystifies me but there you have it.

Anyway, the indefatigable Jonathan Bank, the Mint’s Artistic Director, unearthed the work of this forgotten playwright and has been doing fine productions of some of her other plays, finally getting around to Katie Roche. The eponymous character is a young woman who is a live-in housekeeper to a woman whose middle-aged brother, a successful Dublin businessman, has decided he wants to marry her. Her choice is between him and a local lad her age, but with “limited prospects.” She marries Stanislaus, the brother, and proceeds to make him miserable.

While the play itself is, well, just OK, Bank’s production shines as usual. Wrenn Schmidt manages to make you care about the rather self-centered Katie, and Patrick Fitzgerald is stodgy with being boring as Stanislaus. Like everything done by the Mint, this is well worth a stream: go the www.minttheater.org to find out how.

The excellent George Street Playhouse is streaming a production of Theresa Rebeck’s Bad Dates, a one-woman play wherein a divorced single mother prepares in her bedroom for various dates, and then come back later to tell us about them. Occasionally, she calls her girlfriend to vent. I am reminded of a pertinent tip in a list of Tips for Women I once had: If you have a problem which you can’t figure out how to solve, bring it to us and we will help you. Don’t ask us to listen to you vent one and on about your feelings about the problem – that’s what your girlfriends are for. Andrèa Burns is delightful as Our Heroine, who works her way up to be the manager of a restaurant run by some shady Romanians and almost finds herself afoul of the law. Fortunately, one of her bad dates turns out to be a lawyer who gets her out of this jam. To stream this fine production, go to www.georgestreetplayhouse.org.

“It requires a certain largeness of spirit to give generous appreciation to large achievements. A society with a crabbed spirit and a cynical urge to discount and devalue will find that one day, when it needs to draw upon the reservoirs of excellence, the reservoirs have run dry.”

“It is not the critic who counts; not the man who points out how the strong man stumbles, or where the doer of deeds could have done them better. The credit belongs to the man who is actually in the arena, whose face is marred by dust and sweat and blood; who strives valiantly; who errs, and comes short again and again, because there is no effort without error and shortcoming; but who actually does strive to do the deeds; who knows the great enthusiasms, the great devotions; who spends himself in a worthy cause; who at the best knows in the end the triumph of high achievement; and who at the worst, if he fails, at least fails while daring greatly, so that his place shall never be with those cold and timid souls who know neither victory nor defeat.”