New York, NY – At the 2015 Tribeca Film Festival Adrien Brody starred in the psychological thriller Backtrack. The film follows the story of one man with a dark secret and his journey to make things right.

Psychotherapist Peter Bowers (Brody) is suffering from horrible dreams and earth-shattering visions. When he uncovers the horrifying secret shared by his patients, he is put on a course that takes him back to the remote hometown he fled years ago. It is here that he must solve a mystery from years ago. 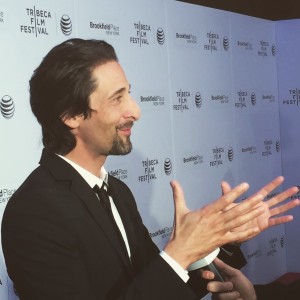 “Michael Petroni is an amazing writer and a great filmmaker,” said the actor. “The story is a wonderful balance of fulfilling the commercial appeal of a thriller and also having a great depth of the character. It is a privilege when you get materials like this.”

The film takes the audience on a fantastic journey. Along with a fascinating script full of twists is an array of great performances, especially by lead Brody.

On the red carpet (ElizaBeth Taylor)