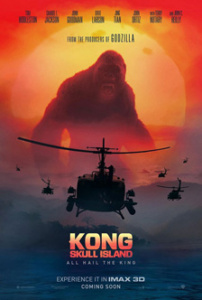 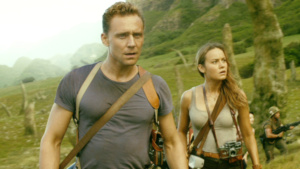 Though this new re-boot of the cinematic classic offers a buffed-up, adrenalized version of the legendary King Kong character, director Jordan Vogt-Roberts retained most of the structural elements of the original’s narrative. Though scrambled, rebalanced and transformed, mostly for the better, he resets this story to take place in 1973 in order to put into play a whole new mythology built around the advent of the mega-monsters. The two lovers are here — in this case, reconfigured to be former British Special Air Service Captain James Conrad (Tom Hiddleston) and pacifist photojournalist Mason Weaver (Brie Larson) but their story is really sublimated compared to the implicit political message embedded in this version.

Much like the original storyline, a team of explorers and soldiers travel to an uncharted Pacific island thinking they are there to do scientific research only to discover a world of monsters, including a mythic super-sized, gorilla-like Kong. But unlike the 1933 version, all the action takes place on the island which stands in for an entirely ancient world.

That does mean the film riffs not only on the original; there are homages to all sorts of cinematic tropes such as Apocalypse Now and the Jurassic Park films among others. In this new film, Samuel L. Jackson — who plays a demented Colonel Packard bent on taking revenge on Kong for killing most of his men — repeats his famous line, “Hold onto your butts,” from 1993’s Jurassic Park — another film about an island beset by giant creatures that Jackson appeared in. So besides the obvious suggestion of “Apocalypse Now’s” Colonel Kurtz, the raging Jackson provides a character rife with references.

Besides that, given the director’s comic background (he did Comedy Central’s “Mash-Up” and the film “Kings of Summer”), Vogt-Roberts couldn’t resist brings in John C. Reilly, an actor who provides a light touch of comic relief to what is otherwise a very serious life-threatening sequence of gruesome death scenes. As most of the crew pushes forward — unaware that they are crossing into a forbidden domain of unearthly ancient beasts, Hank Marlow (Reilly) suddenly appears as a marooned World War Two pilot, who guides them to safety and, essentially, explains the plot twists to everyone, cast and audience.

Though audiences might assume this ape will succumb in the same way as the first version, that’s not the case (no spoilers here but sequels will include many other familiar monsters). It’s most of the characters who die. But that a strength about this film where most of them were annoying anyhow. Much like other recent beast fare in theaters (“Logan” and “Beauty and the Beast”) “Kong: Skull Island” provides a worthy rethink of this source material for audiences to gnaw on.

G. H. HARDINGJanuary 30, 2023
Read More
Scroll for more
Tap
Sports Stars That Have Gone Into Acting
13 Minutes A Powerful Look At A Man Who Tried To Take Out Hitler