Once on This Island: A Tropical Fairytale That Will Transport You

Once on This Island: A Tropical Fairytale That Will Transport You

Get ready to be enchanted by Lynn Ahrens and Stephen Flaherty’s Broadway revival of Once on This Island. From the first note of music, the voices are each better than the last. This is a vocally glorious show. First seen on Broadway in 1990, from the moment we enter Circle in the Square’s theatre, we have landed on a ravaged Caribbean island, thanks to Dane Laffrey’s colorful set. A chicken, a goat, clothes drying on lines, tree limbs, religious shrines, and water that has washed up on shore almost make you feel the islands tropical breezes and the spirit of rebuilding. 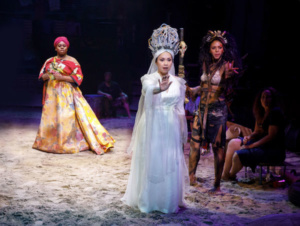 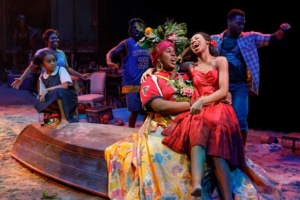 The show is to calm a young child (Mia Williamson) from the storm looming on the horizon. Here, the dark-skinned peasants labor on one side of the island, while the mixed-blood “grands hommes” descended from French colonists live in idle luxury on the other. Gates separate the two cultures. But despite everything, the peasants sing “We Dance.” 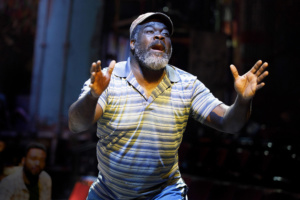 Enter Ti Moune (the iridescent Hailey Kilgore), who once was drowned and brought back to life by the gods. Now orphaned, Ti Moune is found in a tree by peasants (Kenita R. Miller and Phillip Boykin) who lovingly raise her. As Ti Moune grows up, she sees Daniel (Isaac Powell), a wealthy young man, driving and falls instantly in love. When his car crashes and he almost dies, she gives her life for his. When he is taken back by his people, Ti Moune follows despite being told he will never marry her. They are from two different worlds. She becomes Daniel’s lover, but he is already engaged.  Ti Moune’s heart is broken, but she still believes the gods have destined her to love Daniel. When the god of death offers Ti Moune a chance for her life back, Ti Moune cannot follow through. She does not understand the differences between her and her lover, but she does understand love. The goddess of love turns Ti Moune into a tree to live and spread love forever. 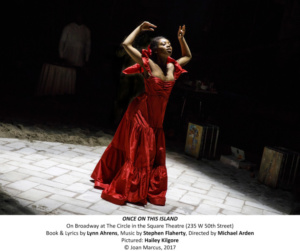 This entire cast is bewitching and plays their parts with such skill that you do not know where to look at times. Newcomer Hailey Kilgore is a find. She brings such venerability and hope that we follow her tale wanting her to succeed even though the odds are clearly against her. Miller and Boykin are heartbreaking as the adoptive parents who understand that children must be free to break their own hearts. As the gods: Lea Salonga infuses the goddess of love with a roundedness and purity of voice; Quentin Earl Darrington as the god of water lulls you with his rich vocals; Papa Ge is played by Merle Dandridge switching roles from a male to a female – with her rich, lush lower register she growls and purr’s as death; but the most interesting of the gods is Asaka, played by the fabulous transgender Drag Queen Alex Newell – it is amazing to watch the audience cheer for this diva throwing epic shade. 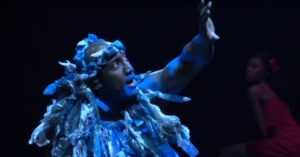 Michael Arden’s direction is like a magical 3D storybook that comes to life before your eyes. I loved how Daniel’s car came into being as well as the inventive instruments that bring out the imagination. Camille A. Brown’s choreography shows an exuberance and the wild abandon of revelry.

The score brings a calypso beat that infuses joy and ballads that melt the heart. This is Ahrens and Flaherty at the beginning of their career. The orchestrations by AnnMarie Milazzo and Michael Starobin enhance the vocal harmonies.

Jules Fisher and Peggy Eisenhauer, create a lighting masterpiece with candles and alchemy that conjure a world beyond our reality. Clint Ramos’ costume designs delight, as he uses recyclable materials and an infusion of tropical fairytale gowns.

Based on Rosa Guy’s book, My Love, My Love: Or, The Peasant Girl, Once on This Island is basically a re-telling of The Little Mermaid without the happily ever after traditional ending.

Expect this show to receive multiple Drama Desk, Outer Critic, and Tony nominations. This is one show you should put on your Christmas list as a must see.

Once on This Island: Circle in the Square.