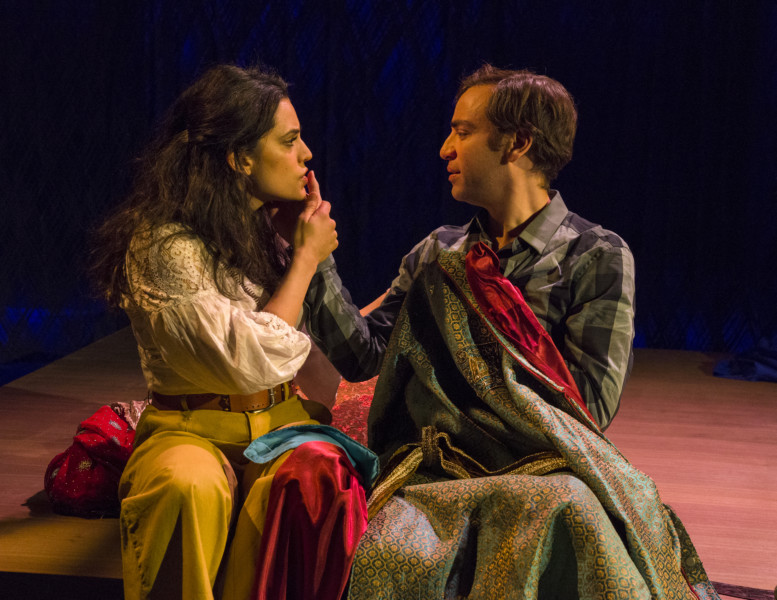 “Who lives, who dies, who tells your story?” One Thousand Nights and One Day 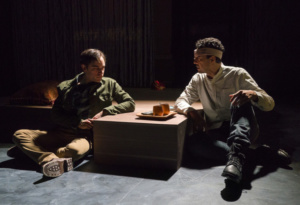 There is more than meets the eye with the new musical One Thousand Nights and One Day by Jason Spiegel Grote (book and lyrics). Produced by the Prospect Theater Company, One Thousand Nights and One Day is based on the play 1001 by Jason Grote, which opened tonight at the A.R.T./New York Theatres. This clever deconstruction of the Arabian Nights tale intertwines the new age philosophy of the veils lifting and time becoming one. 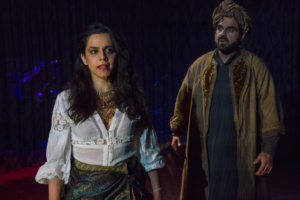 In mythic Persia, we meet the One-Eyed Arab (Graham Stevens) who introduces us to Shahryar (Ben Steinfeld). This king, through the infidelity of his first queen, marries and beheads a new bride every day. Scheherazade (Sepideh Moafi), to save the women in her kingdom and her own life, marries the King, who is slipping in and out of time. He recognizes her but does not know why. Scheherazade tells her stories, and as she does we enter modern-day New York, where Alan (Steinfeld), a Jewish man, and Dahna (Moafi), a Palestinian woman, meet. As both worlds collide, we hear the ending of one of the lifetimes. 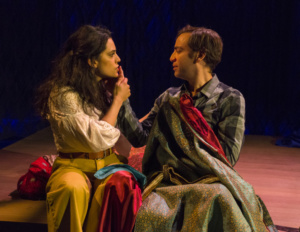 The cast, led by Stevens, Steinfeld, and Moafi, also includes Ashkon Davaran, Yassi Noubahar, Chad Goodridge and Gabriella Pérez. Ms. Moafi’s voice is beautifully operatic yet thrills with Arabic cadences. Mr. Stienfeld’s voice is flawless and soothing. Mr. Stevens brings the perfect comedic touches to the piece. The entire cast works well together in bringing their characters to life, both in acting and movement.

The show’s music by Marisa Michelson is beautifully sung with rhythms that lead the melody. There is an arrhythmic sound here that allows the vocalist total freedom. Her patterns are complex, but she understands this style of music. It is what Ms. Michelson brings to this piece that I wanted to hear in The Band’s Visit. In One Thousand Nights and One Day, she also brings in opera, musical theater, and jazz. Her music has an authenticity to it that seems to heal through vibration. She captures sound in its purest form. The music works beautifully together with the lyrics by Mr. Grote.

Erin Ortman directs this piece with flourish, allowing these parallel universes to shine through. Karla Puno Garcia’s choreography is modern and born out of the same kind of organic method of Ms. Michelson’s music.

Clever use of curtains by scenic designer Jason Ardizzone-West, which open and close like veils. Carolyn Wong’s lighting sets the moods and the time frames apart, while Becky Bodurtha’s costumes evoke both time frames.

Jason’s text challenges you to think deeply. There is a heaviness in the air, a feeling of stories colliding, a feeling as if things are changing on the horizon, One Thousand Nights and One Day just might be in the zeitgeist.

One Thousand Nights and One Day: Prospect Theater Company at the A.R.T./New York Theatres, 502 West 53rd Street, until April 29th.

Suzanna BowlingJune 22, 2022
Read More
Scroll for more
Tap
Carousel in the New Millennium
Meet Dane Laffrey The Set Designer of Once On This Island and Summer and Smoke