Only Yesterday Brings Back The Memories of John and Paul 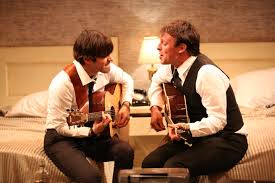 Only Yesterday Brings Back The Memories of John and Paul

“And if I say I really knew you well
What would your answer be?
If you were here today
Ooo ooo ooo, here today”

In the political climate we are in, being thrown back in time where Paul McCartney and John Lennon are mates brings back fond memories of yesteryear.

Bob Stevens, former producer of Malcolm in the Middle and The Wonder Years, brings back 1964 in Only Yesterday. As a hurricane is hitting Key West, Florida, Lennon (Christopher Sears) and McCartney (Tommy Crawford) are holed up in a motel room, thanks to there manager (Christopher Flockton). Despite the weather fans are camped outside as the boys are in prisoned in their drab surroundings.

Based on a realize event when The Beatles performed one concert at the Gator Bowl in Jacksonville, Florida. The concert was originally to have been racially segregated, but The Beatles refused to perform until they received an assurance from the promoter that the audience would be mixed. The group had been due to fly to Jacksonville on the morning of September 9, 1964, but their aeroplane was diverted to Key West when Hurricane Dora struck. Most of Jacksonville was left without electricity for several days, but because of hurricane damage 9,000 of the 32,000 ticket holders were unable to get to the venue.

“But as for me,
I still remember how it was before
And I am holding back the tears no more
Ooo ooo ooo, I love you, ooo”

As Paul and John are homesick, exhausted and longing for home. The two drink, bond over their music and their mutual sorrow over losing their mothers. As Lennon and McCartney songs get played and sung, the night passes. A young fan Shirley Knapp (Olivia Swayze), who gets stuck in an air vent adds some comedic relief. The two mates start to feel sorry for her, offer her comfort. As the night ends the two become inebriated, opening up their souls, but when morning comes….they are shut back up.

“What about the night we cried?

Crawford and Sears are charming and win our hearts. Crawford does a brilliant laid back Paul McCartney and Sears is the more mischievous grinning and ready for a row. Their scene with Ms. Swayze is delightful.

Director Carol Dunne gives this play a light touch, an homage to The Beatles and their legacy.

This show makes you yearn for gentler times and when mop top Brits ruled the air waves.

Only Yesterday: Northern Stage at 59E59 Theaters, until Sept. 29th.

Decky Does a Bronco: A Powerful Play Not To Be Missed
In Conversation With Jason Danieley