The Coming Woman Trailer from Ram on Vimeo. 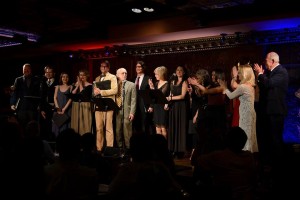 Onward Victoria was a musical choreographed by the late great Michael Shawn. It opened on December 14, 1980 at the Martin Beck Theatre, where it ran for one performance. The cast included Jill Eikenberry as Victoria Woodhull, Bethe Austin as her sister Tennessee, Michael Zaslow as Henry Ward Beecher, Ted Thurston as Cornelius Vanderbilt, Laura Waterbury as Elizabeth Cady Stanton, Dorothy Holland as Susan B. Anthony, Gordon Stanley as Fleming, and Lenny Wolpe as Charlie Delmonico. The show had a book and lyrics by Charlotte Anker and Irene Rosenberg, with  music by Keith Herrmann (Romance/Romance). Its subject is Victoria Woodhull, the 19th-century woman who with her sister were the first women to operate a brokerage firm, at which they became millionaires; and started a newspaper. Woodhull was a proponent for free love and activist for equality of the sexes. In a fictional romance that leads to the minister being tried for alienation of affections, this show was ahead of its time. Last night, thanks to producer, writer and performer Steven Carl McCasland, Feinstein’s/54 Below and musical director James Horan (also on piano), Onward Victoria’s score had a delightful second listen to. Songs like “Respectable,””Unescorted Women,”Another Life” the fabulous “Changes” and “Magnetic Healing” showed the tuneful score was not something to banish. Keith Herrmann’s melodies are catchy and interesting with areas that sounded as if Schwartz or Sondheim listened to this score. 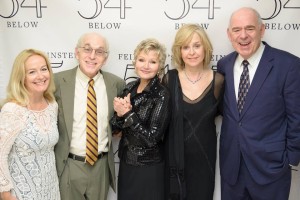 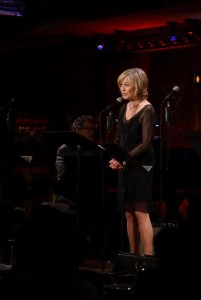 A special treat came when Jill Eikenberry came onto the stage to sing “Another Life” with composer Keith Herrmann on piano.

Another surprise was that the evening was being filmed for a documentary to be done on Miss Woodhull (See video).

Steven McCasland staging was innovative and interesting and brought Onward Victoria to life, but in hearing these lyrics, I can see why this show was and still is ahead of its time. I am enclosing the lyrics to “You Can Not Drown The Dream.”

WE ALWAYS CRUCIFY OUR PROPHETS KEEPING THE GUILLOTINE READY TO SLICE

WE BUILD THE SCAFFOLDS, POUR THE HEMLOCK THOSE WHO CLING TO DREAMS PAY THE PRICE

VICTORIA: I have an inalienable right to love whom I please for as long as I please and with that right you cannot interfere. If that makes me a free lover, so be it!
LIFE FLOWS ON, WE ONLY HAVE ONE CHANCE
TO NAVIGATE ITS RUSHING STREAM

NARRATOR: Victoria moved to London following the third election… ELIZABETH: continuing her career as speaker and editor. BETHE/TENNIE: It was there that she’d marry John Bidulph Martin.

ELIZABETH: –not just for women’s rights, but human rights, too–

NARRATOR: –for the rest of her life.

NARRATOR: A single candle in a red votive illuminates a tribute to the stockbroker, politician, mother, wife, sister, clairvoyant and three-time Presidential nominee.

LIFE FLOWS ON, WE ONLY HAVE ONE CHANCE TO NAVIGATE ITS RUSHING STREAM

Read it in the Weekly – Part I (Ensemble)

I Depend on You (Bethe Austin and Sabina Petra)

A Taste of Forever (Paul Thomas Ryan and Sabina Petra)

Read it in the Weekly – Part II (Ensemble)

Another Life (Jill Eikenberry with Keith Herrmann on piano)

You Cannot Drown the Dream (Ensemble)

A Broadway cast recording was released by Original Cast Records.

My View: The Trapp Family Made Music In These Hills But Mr. Finn Had Finkel & Sons
Midnight at The Never Get Part of The NYMF