This jukebox musical imagines William Shakespeare’s (Stark Sands) Juliet (the sassy Lorna Courtney) not killing herself over Romeo, a boy she’s known four days. This revision is due to Shakespeare’s very dissatisfied wife Anne Hathaway (Betsy Wolfe), who asks “Why, does Juliet have to die?” 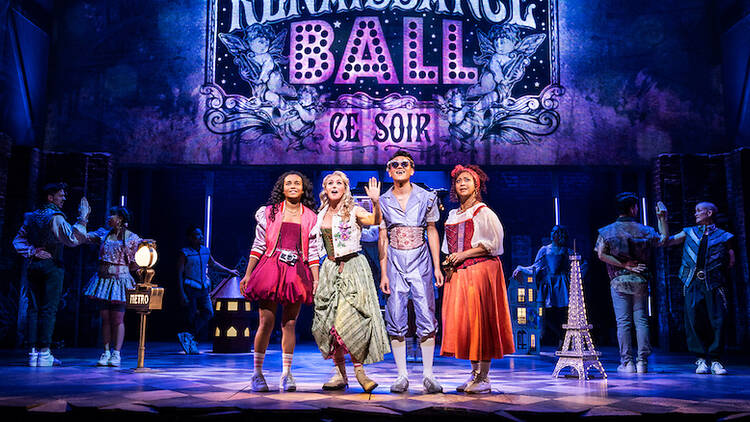 Anne writes herself into the story along with a new BFF for Juliet (Justin David Sullivan, though at my performance Michael Evan Carrier) who is not a girl and not yet a woman, along with her nurse Angelique (the unintelligible Melanie La Barrie). Together they go to Paris to help Juliet escape becoming a nun. In the meantime, Juliet again falls for another in fewer days than her first romance. In Paris, she and her friends attend a ball given by Lance DuBois (an embarrassing Paulo Szot), whose cute nerdy son François (Philippe Arroyo) falls for Juliet and then May. It gets complicated by the surprise return of Romeo (Ben Jackson Walker) The music is by Karl Martin Sandberg aka Max Martin, a Swedish record producer and songwriter. 29 of his songs are squashed into this production. Think hits by The Backstreet Boys, Britney Spears, Katy Perry, Céline Dion, NSYNC, Maroon 5, Taylor Swift, Kesha, Demi Lovato, Ariana Grande, Bon Jovi,  Pink, Kelly Clarkson, Justin Timberlake and The Weeknd. None of them are that wonderful or sung that well. When will Broadway understand pop, rock and musical theatre are different formats, no matter how loudly the cast screams the songs at the audience? The book by David West Read is not very funny or very deep. An example: Juliet insists on calling François DuBois  “Frankie DeBoy,” making her sound not very bright and this is supposed to be a feminist musical. Also, Juliet is supposed to marry François, but her BFF May hits on him and gets him…..some BFF!

Luke Sheppard’s direction is frantic, the choreography by Jennifer Weber spastic. Soutra Gilmour’s clever set design is flashy. Paloma Young’s costume design seem to have used all the colors of the rainbow, as she mashes the centuries together. Howard Hudson’s lighting design, Gareth Owen’s sound design and Andrzej Goulding’s video & projection design add to the spectacle.

The cast delivers, but not in subtlety or depth. Only Courtney, Sands and Arroyo give us performances to care about.

For a show about feminism, self-destiny, empowerment, chosen identity and pride, after two and half hours my takeaway was disappointment of the lack of any of that.