Open Roads: New Italian Cinema and The Filmmakers Who Made it a Success 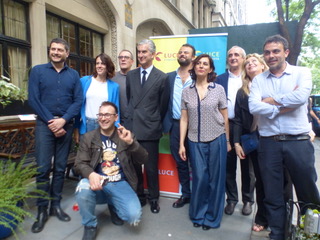 Open Roads: New Italian Cinema and The Filmmakers Who Made it a Success

Open Roads: New Italian Cinema is the only screening series to offer North American audiences a diverse and extensive lineup of contemporary Italian films. This year’s edition again strikes a balance between emerging talents and esteemed veterans, commercial and independent fare, outrageous comedies, gripping dramas, and captivating documentaries, with in-person appearances by many of the filmmakers.

Open Roads: New Italian Cinema is the leading screening series to offer North American audiences a diverse and extensive lineup of contemporary Italian films. This year’s edition again strikes a balance between emerging talents and esteemed veterans, commercial and independent fare, outrageous comedies, gripping dramas, and captivating documentaries, with in-person appearances by many of the filmmakers.

The Opening Night film is Claudio Giovannesi’s Piranhas, adapted from the novel by Gomorrah writer Roberto Saviano. The fourth film by Giovannesi and winner of the Berlinale Silver Bear Best Script Award, Piranhas follows a group of cocksure young men enraptured by the local Camorra who find themselves gradually descending into the violent, paranoid world of the Napoli mafia. Highlights of the lineup include Paolo Sorrentino’s Loro, a satirical reimagining of the fall of Silvio Berlusconi with The Great Beauty’s Toni Servillo as the disgraced and debaucherous prime minister; Mario Martone’s stirring period drama Capri-Revolution, which centers on a young goatherd who finds herself drawn to a commune of politically radical artists and intellectuals in pre-WWI Capri; Gianni Zanasi’s Lucia’s Grace, starring Alba Rohrwacher (Happy as Lazzaro, I Am Love) as a conflicted land surveyor who learns that her new building project threatens the environmental safety of the city; actor Valerio Mastandrea’s directorial feature debut Laughing, a powerfully cathartic exploration of grief punctuated by disarming humor and flashes of poetic realism; and the evocative romance Ricordi?, Valerio Mieli’s earthy meditation on love following an unnamed couple wrestling with the passage of time and the tidal forces of memory.

Documentaries feature strongly in the Open Roads lineup, including the North American premiere of Agostino Ferrente’s lyrical and moving Selfie, a chronicle of adolescent friendship in the gang-ravaged Traiano region of Naples largely filmed on smartphones by the 16-year-old subjects; The Disappearance of My Mother, an intimate, inquisitive portrait of cinematographer-turned-director Beniamino Barrese’s mother, the renowned model, activist, and feminist educator Benedetta Barzini; Normal, a sweeping work of anthropology from Adele Tulli that reckons with instilled and reinforced gender identities in modern Italian society; and Sono Gassman! Vittorio re della commedia, Fabrizio Corallo’s engaging survey of the life, work, and legacy of the Italian screen icon Vittorio Gassman.

This year’s edition of Open Roads will also showcase a number of breakout performances, including  Ciro D’Emilio’s coming-of-age soccer drama If Life Gives You Lemons, which features a compelling lead performance by Giampiero De Concilio; Federico Bondi’s FIPRESCI-winning sophomore narrative feature Dafne, anchored by Carolina Raspanti’s performance as a young woman with Down’s syndrome grappling with the death of her mother; and writer-director Laura Luchetti’s Twin Flower, starring nonprofessional actors Anastasiya Bogach and Kallil Kone as a pair of teenage runaways who forge a relationship haunted by their respective pasts. Additional standouts of the lineup include Euphoria, Valeria Golino’s quietly wrenching portrait of two brothers forced to reckon with their long-unspoken resentments when one falls ill; Edoardo De Angelis’s The Vice of Hope, a stirring survival saga about a desperate woman fighting to escape from her family’s criminal enterprise; and Magical Nights, Paolo Virzi’s murder mystery–cum–film industry satire studded with winking references to Italian-cinema legends.

Open Roads will also feature a special repertory screening of Bernardo Bertolucci’s 1962 directorial debut La Commare Secca, a savvy, formally audacious murder mystery adapted from a short story by Pier Paolo Pasolini that marks a fitting introduction to the Italian master, who passed away in November at the age of 77.