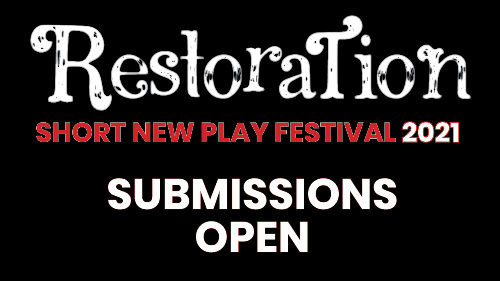 Six winning submissions will be performed along with commissioned world premieres from C. A. Johnson (All the Natalie Portmans) and José Rivera (Marisol, The Motorcycle Diaries).

“‘Restoration’ is a jumping-off point for creative thematic juices. We want writers to be in dialogue with classical theater in a multitude of surprising ways. Brainstorm by reviewing our Mission and take a look through our history of Readings and Productions. Entrants might riff on a classical character, borrow a classical milieu, or create a brand new style of dramatic verse. Finding inspiration from classics beyond the traditional Western canon is encouraged. This year’s selected plays will be performed online in a Zoom-style format – write with that in mind!,” explains Artistic Director Jesse Berger. The deadline is 12 Noon on Monday April 5th.

The Eleventh Annual Short New Play Festival will be presented on Monday, July 12th online. Directors and casting will be announced at a later date. This year’s Festival is made possible with the continued leadership support of The Noël Coward Foundation.

Using this year’s theme “Restoration,” writers are asked to submit a short play of no more than 10 minutes in length that makes use of any, or all, of the following: heightened language or verse; a classical theme or style; a classical story; is self-contained with a beginning, middle and end; and is an original, unpublished, and never previously produced new work.

There is a $10 submission fee. These fees partially offset open submission processing costs, commissioning fees, and other expenses.

This year’s selections will be announced in May. Complete details about the submission guidelines can be found at https://www.redbulltheater.com/submissions-open-2020-short. Selected playwrights will receive an online reading of their submission as part of the festival on Monday July 12th, performed by an ensemble company of some of New York’s finest actors as well as a commissioning fee of $350. Playwrights will be consulted on choices for the shared ensemble cast, will have final script approval, and will have the optional opportunity to have their play published and licensed by Stage Rights as part of our Red Bull Shorts series.

This year’s commissioned writers are:

C. A. Johnson is a Brooklyn-based playwright originally from Metairie, Louisiana. Her plays include All The Natalie Portmans (MCC Theater), Thirst (2017 Kilroys List, CATF), The Climb (Cherry Lane Mentor Project), An American Feast (NYU Playwrights Horizons Theater School), and I Know I Know I Know. Most recently she was the Tow Playwright in Residence at MCC Theater. She was previously the 2018 P73 Playwriting Fellow, The Lark’s 2016-17 Van Lier Fellow, a Dramatists Guild Fellow, a member of The Working Farm at SPACE on Ryder Farm, A Core Writer at The Playwrights Center, a member of The Civilians R&D Group, a Sundance/Ucross Fellow and a 2018 Sundance Theatre Lab Fellow. Her work has been developed with The Lark, PlayPenn, Luna Stage, Open Bar Theatricals, The Dennis and Victoria Ross Foundation, and The Fire This Time Festival. BA: Smith College MFA: NYU

José Rivera is a recipient of Obie Awards for Marisol and References to Salvador Dali Make Me Hot, both produced by The Public Theatre, NY, and seen regionally and internationally.  Other plays include Cloud Tectonics (Playwrights Horizons, Humana Festival, La Jolla Playhouse), Boleros for the Disenchanted (Yale Rep, Huntington Playhouse), Sueño (Hartford Stage, Manhattan Class Company), Sonnets for an Old Century (Barrow Group), School of the Americas (Public Theatre), Massacre (Sing to Your Children) (Goodman Theatre, Rattlestick), Brainpeople (ACT/San Francisco), Adoration of the Old Woman (Sundance Theatre Lab, INTAR, La Jolla Playhouse), The House of Ramon Iglesia (Ensemble Studio Theatre), Another Word for Beauty (Goodman, New York Stage and Film), The Maids  (INTAR), The Kiss of the Spiderwoman (Menier Chocolate Factory, London), Each Day Dies with Sleep (Circle Rep, Berkeley Rep).  His screenplay for The Motorcycle Diaries was nominated for 2005 Best Adapted ScreenplayAcademy Award – making him the first Puerto Rican writer ever nominated for an Oscar.  His screenplay was also nominated for a BAFTA and Writers Guild Award, and received top screenwriting awards in Argentina and Spain.  On the Road premiered at the 2012 Cannes Film Festival.  Trade was the first film to premiere at the United Nations.  Rivera co-created and produced “Eerie, Indiana,” (NBC) and was a consultant and writer on “Penny Dreadful: City of Angels” (Showtime, 2019).  He will be head writer for the Netflix series based on One Hundred Years of Solitude.  Rivera’s short film “The Fall of a Sparrow” has been seen at the Big Apple Film Festival, the Official Latino Film Festival, The Chain Film Festival and many others.  In 2020 he directed the world premiere workshop of his play Lovesong (Imperfect) at the 14th Street Y, produced by Planet Connections, as well as the short film “The Civet.”  He has served on the boards of Theatre Communication Group and the Sundance Institute and mentored at Sundance Screenwriting Labs in Utah, Jordan, and India.  His most recent play Your Name Means Dream was part of the Rattlestick Playwrights Jam, 2020, and read at the Sundance Theatre Lab.

Red Bull Shorts
Together with Stage Rights, Red Bull Theater has published four collections featuring the best of our annual Short New Play Festival. This ongoing series features 10-minute plays of heightened language and classical themes by today’s hottest writers, including commissions by established playwrights such as John Guare, David Ives, Regina Taylor, and Anne Washburn, and winning entries by writers such as Mike Anderson, Sam Lahne, Lynn Rosen, and Jen Silverman–-all chosen from a competition that receives nearly 300 submissions each year. In the hands of great playwrights, the 10-minute play is a highly entertaining dramatic form. This collection offers the most delectable of these delightfully compact works – some downright silly, and others powerfully moving.

Red Bull Theater, hailed as “the city’s gutsiest classical theater” by Time Out NY, brings rarely seen classic plays to dynamic new life for contemporary audiences, uniting a respect for tradition with a modern sensibility. Named for the rowdy Jacobean playhouse that illegally performed plays in England during the years of Puritan rule, Red Bull Theater is New York City’s home for dynamic performances of great plays that stand the test of time. With the Jacobean plays of Shakespeare and his contemporaries as its cornerstone, the company also produces new works that are in conversation with the classics. A home for artists, scholars and students, Red Bull Theater delights and engages the intellect and imagination of audiences, and strives to make its work accessible, diverse, and welcoming to all. Red Bull Theater believes in the power of great classic stories and plays of heightened language to deepen our understanding of the human condition, in the special ability of live theater to create unique, collective experiences, and the timeless capacity of classical theater to illuminate the events of our times. Variety agreed, hailing Red Bull’s work as: “Proof that classical theater can still be surprising after hundreds of years.”

Since its debut in 2003 with a production of Shakespeare’s Pericles starring Daniel Breaker, Red Bull Theater has served adventurous theatergoers with Off-Broadway productions, Revelation Readings, and the annual Short New Play Festival. The company also offers outreach programs including Shakespeare in Schools bringing professional actors and teaching artists into public school classrooms; Bull Sessions, free post-play discussions with top scholars; and Classical Acting Intensives led by veteran theater professionals. In partnership with The Drama League, Red Bull Theater offers The Classical Directing Fellowship, which immerses a director in the life of a company working in the classical canon, and is designed to bring diverse voices into the productions and institutions dedicated to this work.

Suzanna BowlingJune 22, 2022
Read More
Scroll for more
Tap
What to Watch in The New Year: Jan 31
The Glorious Corner