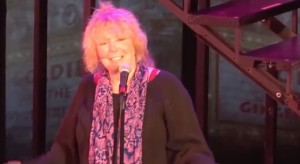 Genya Ravan, aka Goldie is an American rock singer and producer. She was the lead singer for The Escorts, Goldie & the Gingerbreads and Ten Wheel Drive. A new musical based on her life opened tonight called Rock and Roll Rufugee based on Genya’s life up until she first starts singing professionally.

Genya’s` career started in 1962 on a dare in a Brooklyn club called The Lollipop Lounge, which is also the title of her autobiography published by Billboard Books. On a dare in a bar, she jumped up to sing. She was asked to join the band The Escorts, Richard Perry being one of the members. After signing to Decca Coral records and being produced by Henry Jerome, They covered “Somewhere” from West Side Story and it went to number 1 in parts of the Mid-West. In 1963 she formed Goldie and The Gingerbreads. After seeing Goldie and The Gingerbreads at a party for the Rolling Stones, Atlantic Records Chairman Ahmet Ertegün signed them to Atlantic subsidiary Atco Records.

While playing New York City’s hot spot The Wagon Wheel on 45th Street in Times Square, Mike Jeffries, Eric Burdon, Hilton Valentine, and Chas Chandler spotted them, and wanted them to come to England. Goldie and The Gingerbreads toured with the Rolling Stones, the Yardbirds, the Kinks, and Manfred Mann. They reached the charts with their hit “Can’t You Hear My Heart Beat” in 1965. The song reached #25 on the UK Singles Chart. The band stayed in London for two years.

Ravan appeared on the The Mike Douglas Show, The Johnny Carson Show, Della and The Dick Cavett Show television shows. She performed at the Atlanta Pop Festival, twice at Carnegie Hall and twice at Madison Square Garden, along with various clubs in New York City, Boston and Philadelphia, including the famous CBGB.

In 2006 Ravan was recruited by Steven Van Zandt to host two monthly radio shows (Chicks and Broads, playing women from the ’50s to the present day), and Goldies Garage show of unsigned bands.

In 2011, the Rock and Roll Hall of Fame Museum included Goldie and The Gingerbreads in their Women in Music exhibit which travelled from state to state.

Genya Ravan toured in 2013, selling out New York City’s Iridium and will be going back by popular demand.

In 2014 she was featured on the Tonight Show with Jimmy Fallon for bearing remarkable resemblance to him in drag.

Look for review of Rock and Roll Refugee and exclusive interview with Genya coming up soon.