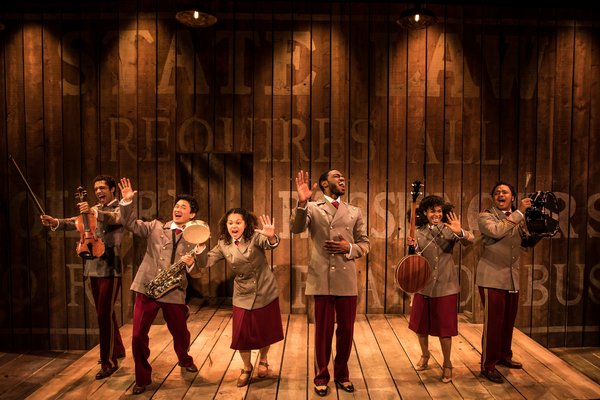 Opening Night of Sweetee Not So Sweet

Opening Night of Sweetee Not So Sweet 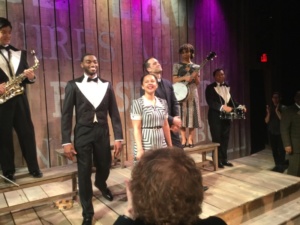 It is always a problem when the book, music and lyrics are all done by one person. In the case of the new musical Sweetee that person is Gail Kriegel. Broadway alumni Patricia Birch, has directed and choreographed this AEA showcase playing at the Signature Theatre. Set in a racial 1942 South, we meet mixed-race 16-year-old Sweetee (Jordan Tyson), whose mother Violet (Katy Blake) an alcoholic prostitute, has her daughter keeping her eye looking out for trouble, which ends up getting black and blue. Sweetie a singer who is suppose to have a voice that people fall for. Confident and determined she ends up meeting the right Rev. Dan (Jeremiah James) who has started an orphanage and a band. Sweetie ends up joining the other young performers violinist Thomas (Adante Carter), clarinetist/saxophonist Abraham (Hugh Cha), washboardist Murphy (Amir Royale) and banjoist Hedy (Morgan Siobhan Green). Rev. Dan’s wife Hannah (Katherine Weber) has been the provider in a sense. Rev. Dan has managed to get the two kicked out of four parishes, while Hannah’s clergyman father keeps bailing them out with another parish. Rev. Dan decides to take his little band on the road to New Orleans to raise funds. In doing so he alienates himself from his wife, who stays behind. On the way to New Orleans they meet another entertainer (Jelani Alladin) who helps bring them to the next level. Cat Jones, gets the kids to go from Gospel to Swing in order to make the funds they desperately need. Sweetee and Cat fall in love but it turns out the Reverend also lusts for the sixteen year old. The Reverend ends up dividing the band, Cat and Sweetee. In the end everyone forgives and gets back together in the most implausible way. 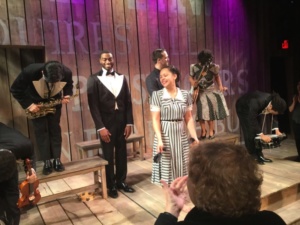 A lot of things are thrown in to make us see the horrible ramifications of the past. At one point the band hitchhikes and a white man (Dave Droxler) picks them all up out of the goodness of his heart. He then kidnaps them to dig ditches by force with the help of a shotgun. We are suppose to believe that in the days of the depression and in KKK country someone would offer 6 people a ride without nothing being attached? The Reverend also travels alone with Sweetee, then he goes further and this is believable? After that Sweetee becomes a business women, with no training in NYC, again implausible. Even the casting of Ms. Tyson as this amazing singer, makes no sense, considering Morgan Siobhan Green has the better voice. All throughout out the musical we are told Sweetee has the better voice, but Ms Green has more presence and a stronger instrument. 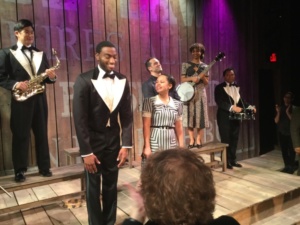 Mr. James has that leading-man persona and Alladin is a stand out. I take my hat off to these performers who were given material that is untuneful, lyrically a bore with missed accents and a book that seems more community theatre than off Broadway. 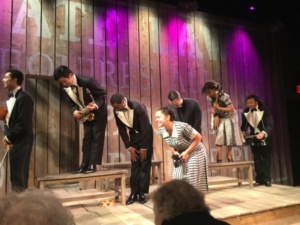 What does stand out is Tim Mackabee set and the off stage band that made the most of this material.

Suzanna BowlingNovember 22, 2021
Read More
Scroll for more
Tap
She Says: Get Ready To Laugh Heartily At The Government Inspector
Bright Half Life – A Whole Lot Of Fun