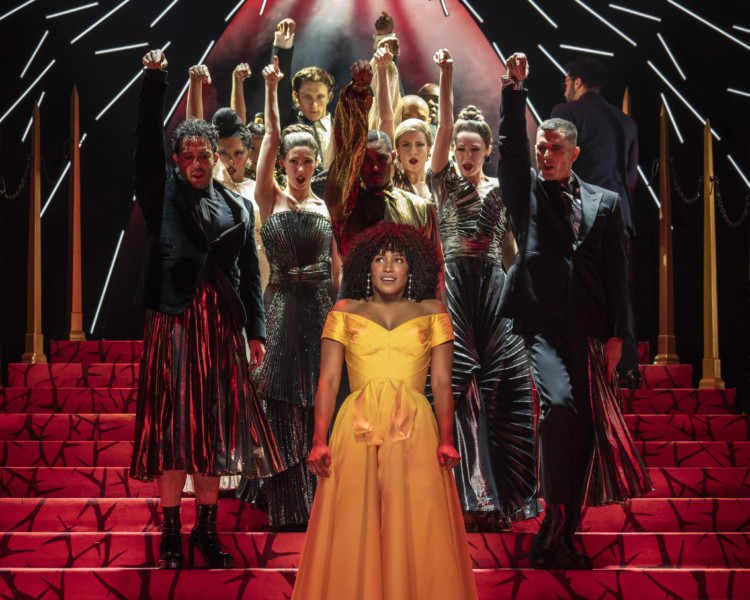 The Chicago audience was jumping out of their Jimmy Choos at Chicago’s Nederlander Theater Sunday night, cheering the official opening of the musical version of The Devil Wears Prada, based on both the novel by Lauren Weisberger, and the popular film made of it in 2006 starring Anne Hathaway as Andrea “Andy” Sachs, an aspiring writer who makes what turns out to be a Faustian deal for success. As they say in the show, “Hell is a runway where the Devil wears Prada.” 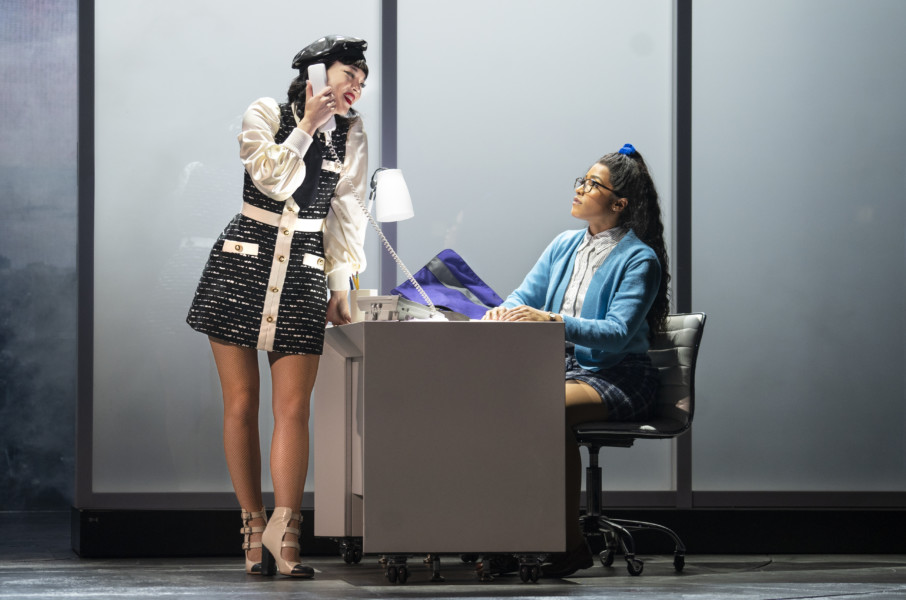 It may seem an odd choice for the former Artistic Director of Chicago’s renowned Steppenwolf Theatre Company, famous for not doing musicals, and  Tony Award winning director of such plays as August Osage County, to helm this production. But Chicago theater artists know how to tell a human story with honesty and depth. There are no gratuitous numbers or meaningless bellowing in this show. Ms. Shapiro has made sure Andy’s story is told with a sincerity that I appreciated. 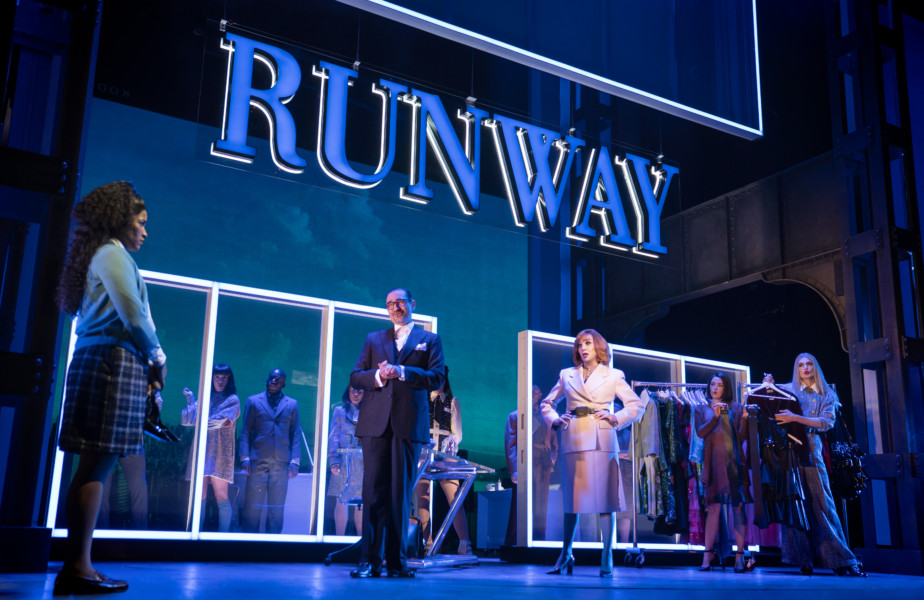 The cast of the Devil Wears Prada photo by Joan Marcus

Andy is played with unforced warmth, inner wisdom, and humor by Taylor Iman Jones. Although Ms. Jones can, and does on occasion, rock the house vocally, she never overplays her more quiet and internal moments in song.  We root for Andy to find the strength to stand up for herself, and cheer for her when she does because Ms. Jones makes us believe she has earned it. 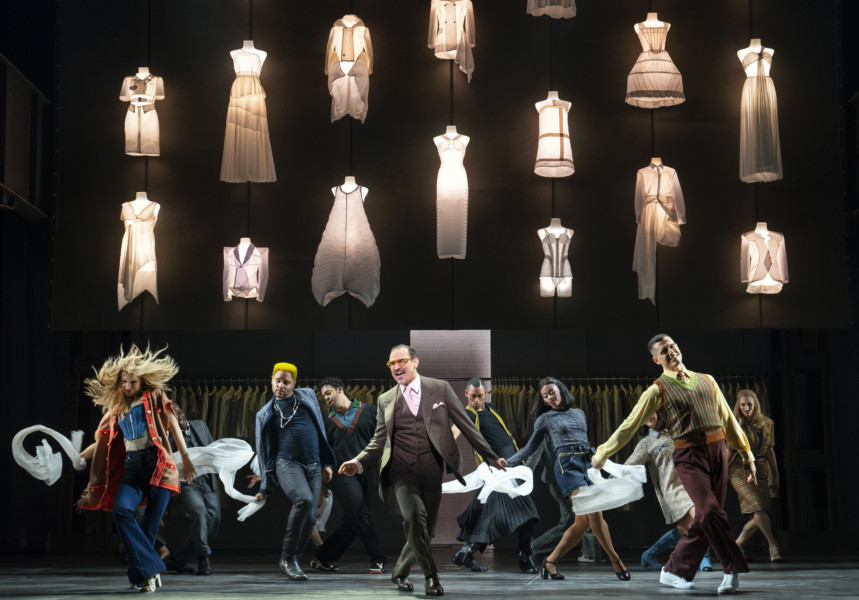 Javier Muñoz and The Cast of The Devil Wears Prada, The Musical Photo by Joan Marcus

After countless doors as a writer are closed in her face, Andy gets an unexpected call for an interview from the head of H.R. at Runway Magazine. So Andy takes a job she doesn’t want, working in an industry she doesn’t care about, and then must fight to prove herself worthy of it. She becomes the second assistant to Miranda Priestly, the icy, iron maiden editor of Runway, played by Tony Award winning comedic genius, Beth Leavel.

Miss Leavel is a more hot blooded Miranda than Meryl Streep’s icy “Snow Queen” in the movie, and she has red hair instead of white to prove it. Ms. Streep’s Miranda was necessarily as inscrutable as she was cold, because the screenplay never really let her express her inner thoughts.  I was afraid this musical would suffer if Miranda was portrayed the same way here. Luckily, in a musical, characters get to express and reveal themselves in song. So Ms. Leavel gets to become a musical baked Alaska, putting hot and cold together in a delicious and tasty delight of a performance.

Andy is second assistant behind Miranda’s first assistant, Emily, played with fine comedic sensibility and perky energy by Megan Mesako Haley. Andy is also helped in her rise within the organization by head designer, Nigel Owens,  played with tremendous charm and physical expressiveness by Javier Munoz.

When Nigel gets Andy to start dressing with style and taking her position more seriously, she begins to rise in Miranda’s eyes. As Andy becomes more enslaved to the whims of Miranda, we wonder whether or not her long suffering boyfriend, Nate, played with simple warmth by Michael Tacconi, can ride out the storm with her.

Andy also has two close friends and roommates, Lauren played by Christiana Cole, and Kayla, played by Tiffany Mann, who are there for love and support in small but meaningful moments. The strain Andy’s new job puts on their relationship isn’t a big part of the show, but adds dimension.

The fly in Andy’s ointment is Christian Thompson, a writer for the publication she really wanted to work for.  Although seemingly supporting her, he has his own agenda.  This role is played skillfully by… Christian Thompson. Go figure.

The book by Kate Wetherhead is acerbic and crackling with humor when appropriate, and touchingly sincere when called for. It keeps just enough of the sources for inspiration, as when Miranda says to Andy icily, “By all means, move at a glacial pace.”But she gets new jabs in as well.

The songs, with music by Sir Elton John and lyrics by Shaina Taub, do what good musical theater songs should do: Reveal inner thoughts, advance plot, and let characters process their emotions. However, Ms. Taub tries to say so much in her lyrics that the central idea of the song often gets lost. For example, Nigel gets a big song about coming out, and at the end of it, I still didn’t know what the song was supposed to be called.

The best that can be said of Sir Elton’s music is that it is serviceable. Maybe he tried too hard to defer to  Ms. Taubs meandering lyrics, which rarely landed on a hook he could set with any musical excitement. Andy’s opening song, “I’ve Got a Job to Do,” is very energetic. But otherwise, most of the music just lays there like last year’s dead stock.

It may seem odd to some that Miranda and Andy don’t have a song together. But I thought that was very appropriate. Even when in the same room, they always exist on two very different planes. This isn’t Patti Lupone and Christine Ebersole in War Paint.

I particularly enjoyed the choreography by James Alsop. When backing up the singers, the ensemble always provided visual interest, but never overwhelmed them. The movement defined the world of the play through the ensemble at every moment.

The Scenic and Media Design by Christine Jones and Brett Banakis, complemented by the lighting design of Paule Constable, are a show unto themselves. When the walls of the New York office start leaning and become the sides of the Eifel Tower in Paris, which then lit up like a Christmas tree, the entire audience gasped and applauded for good reason.

The surprising disappointment of the evening was the relentlessly ugly Costume Design of Arianne Phillips. I frequently found her pieces to be loud, flat, and lacking in any of the distinctive design elements which the story is supposedly all about. She’s no Bob Mackie, and this sure isn’t “The Cher Show.”

In the end, Ms. Shapiro has created a show whose sum is far greater than its parts. Though the songs may be lackluster, they are always appropriate, and enrich our understanding of the characters. Ms. Leavel’s performance adds new dimensions to the story even if the book doesn’t. Overall, the show is a crowd pleaser, as the enthusiasm of the audience proved at every moment. Whether a fire can be lit under the songwriting team and the costumer before their Broadway opening to do something better, and what difference it may make at the box office, remains to be seen.