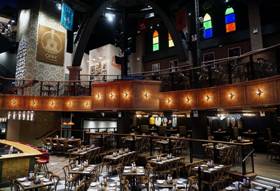 On Friday nights from 10pm to 1am, starting on June 1, 2018, the country music destination will transform into an energetic island oasis. Every Friday in June, fans can experience live Jimmy Buffett tunes, performed by Opry City Stage Superband and Island Country Band.  The bands will also play the best of Zac Brown and Kenny Chesney.  In addition, attendees can enjoy special drink deals on margaritas, as well as participate in live giveaways for tickets to the new Broadway hit.  “Island Fridays” at Opry City Stage are open to the public – there are no cover fees or tickets required.

Escape To Margaritaville,  is an upbeat and energetic new show featuring favorite Jimmy Buffett classics, including “Volcano,” “Fins,” “Cheeseburger in Paradise” and many more. There’s no better place to relax, sing along, and have the time of your life – and now, the audience can continue the party every Friday at Opry City Stage, just a few block from Marquis Theatre where the show is currently playing.

In addition to the daily live performances by a broad range of great country music talent to accompany guests’ drinks and meals, Opry City Stage also recently launched a variety of new and unique series including: a spin on Bruce Springsteen classics during a weekly after party for the ongoing sold-out Springsteen on Broadway which takes place less than a block from Opry City Stage; Two-Step lessons with live music on Tuesdays with a renowned dance instructor; movie nights on Thursdays featuring showings of The Sheriff of Goodtimes, a NEW short documentary about Sheriff Bob, the Bluegrass scene in Greenwich Village and his long contribution to the genre and more.

Located at 1604 Broadway in New York City’s Times Square, Opry City Stage marks the first-ever satellite location of Country music’s highly regarded Grand Ole Opry.  The four-story Opry City Stage includes a retail shop and restaurant with a menu created by the Bromberg brothers of the Blue Ribbon Restaurant Group, alongside performance spaces on the second and fourth floors. Memorabilia from the Opry’s archives are also on view for the first time throughout the venue in a series of rotating art exhibits and installations, the first being Iconic Fashions from the Opry Archives. Opry City Stage New York City is a joint-venture project between Ryman Hospitality Properties, which also owns the iconic Grand Ole Opry, Ryman Auditorium and WSM in Nashville, Tennessee, and DINE Restaurant Group.