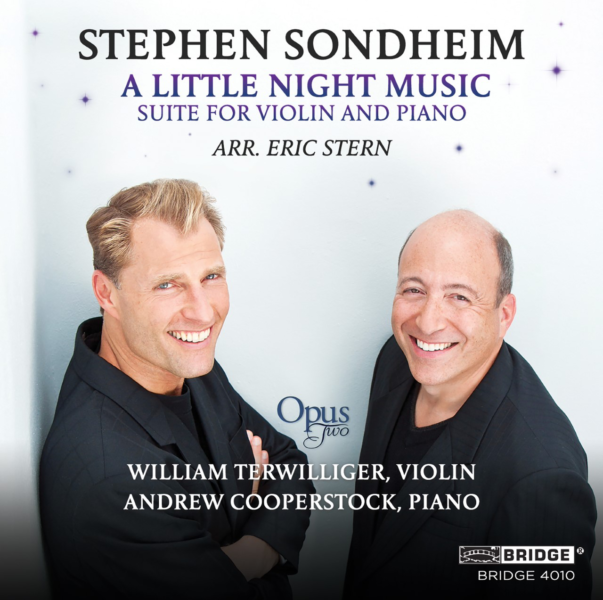 The acclaimed Opus Two violin-piano duo returns to Feinstein’s/54 Below on Tuesday, November 23 at 7pm for an unforgettable tribute to Stephen Sondheim featuring the New York premiere of A Little Night Music: Suite for Violin and Piano and celebration of the release of their world premiere recording of the same name on Bridge Records (4010). The program also includes I Remember from Sondheim’s television musical Evening Primrose, plus songs from Leonard Bernstein’s West Side Story, Candide, Peter Pan, and 1600 Pennsylvania Avenue. Opus Two will be joined by special guest Broadway artist, Elena Shaddow. Broadway director, Eric Stern, who created many of the arrangements, will host the evening.

Opus Two’s world premiere release of Sondheim’s A Little Night Music: Suite for Violin and Piano arranged by veteran Broadway composer Eric Stern will be released on November 19. The recording is available for pre-order at https://bridgerecords.bandcamp.com/album/a-little-night-music-suite-for-violin-and-piano and upon release can be streamed on Amazon, Apple Music, Spotify, YouTube Music, and purchased via iTunes, Amazon, and Google Play, among others.

The four movement suite including Night Waltz, You Must Meet My Wife, A Weekend In The Country, and Send In The Clowns, is based on Stephen Sondheim’s 1973 Tony-award-winning musical A Little Night Music, inspired by Ingmar Bergman’s 1955 film Smiles of a Summer Night. With a limited number of chamber music scores in his catalogue, Sondheim fans will be delighted to welcome this new addition to the violin/piano duo repertoire.

Stern’s imagination and skill capture the charm and flair of each song in this world premiere recording. Says Stern, “I was in college when I first heard the cast album of A Little Night Music, and it is no exaggeration to say that it changed my life. Until then I couldn’t have imagined that a Broadway score could be capable of such lyric and musical sophistication and subtlety. In A Little Night Music Sondheim blends American Musical Theatre tradition with European Operetta sensibilities to create a unique and memorable musical world. I am extremely grateful for Sondheim’s permission to arrange this suite and I hope that, stripped of his poignant, unparalleled lyrics, the brilliance of this music shines through all the more.”

Critics have recognized Opus Two, made up of violinist William Terwilliger and pianist Andrew Cooperstock, for its “divine phrases, impelling rhythm, elastic ensemble, and stunning sounds,” as well as its commitment to expanding the violin-piano duo repertoire. Following their long tradition of championing the works of great American composers, Opus Two recorded works of George Gershwin that reviewers called an “excellent” recording adding that the “performers throw themselves into this fresh look at Gershwin with enthusiasm and enjoyment.”

Eric Stern is a Broadway conductor, arranger, and music supervisor with 19 Broadway musicals to his credit including Shrek, Xanadu, Follies, Parade, and Candide.  He has recorded over 30 albums and performed in concert with such artists as Audra McDonald, Mandy Patinkin and Betty Buckley. He has conducted many of the world’s top orchestras including the London Symphony, Cleveland Orchestra, Chicago Symphony, and is a frequent guest conductor of the National Orchestra of Wales. He was awarded an Emmy for his work with PBS, a Grammy and two Gramophone Awards. Elena Shaddow, recognized for her astounding nightingale vocals, has appeared on Broadway and off-Broadway productions, she has toured nationally and performed in concert venues such as London’s Royal Albert Hall, the Fox Theatre in St. Louis and New Jersey’s Papermill Playhouse, among others.  Her television credits include performances on the Tony Awards show, and a featured role in the TV presentation of The Sound of Music Live! She has also appeared on CBS’s NCIS: New Orleans, Conviction, Person of Interest, ABC’s Time After Time and the Warner Brother’s film The Intern.