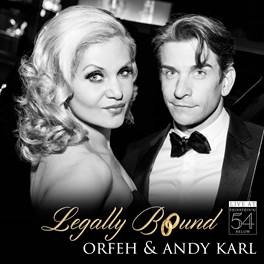 Broadway Records today announced that Orfeh & Andy Karl: Legally Bound – Live at Feinstein’s/54 Below will be released digitally and in stores on Friday August 18, 2017. The album is currently available for pre-order at www.BroadwayRecords.com.

She has a “powerhouse voice” (The New York Times). He is “a theater world heartthrob” (The New York Times). And together Orfeh and Andy Karl have had an impressively long run as one of Broadway’s best couples. Although they met doing the Broadway production of Saturday Night Fever, their irrepressible chemistry became the stuff of legend when they co-starred in Legally Blonde, which garnered Orfeh a Tony nomination. Karl earned his own Tony nods for Rocky, On the Twentieth Century and Groundhog Day (for which he received an Olivier Award).

In “Legally Bound – Live at Feinstein’s/54 Below” the sexy, funny, and enormously talented duo tear through an eclectic mix of pop, rock, rhythm and blues and show tunes that is sure to excite and delight!

“We are so excited to be releasing this album—our first together—that really captures the energy and spirit of “Legally Bound”. We had such a blast doing it, and we are so happy that the people outside of NYC will get to hear it (and that the people who were there will have a chance to twirl those napkins in the air again, this time on repeat or shuffle,” Orfeh & Andy Karl.